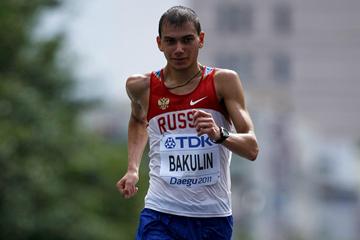 Sergey Bakulin, at 24 the youngest of the Russian race-walking squad in Daegu, lifted gold and his country’s sixth medal out of a possible nine in an extraordinary show of strength for the Russian school of walking.

“For one month before Daegu we were in training camp, training so hard that everyone was injured, including me. But if you want to be the best, you have to train hard,” he reasoned.

“This year we experimented by going up to altitude in Kislovodsk,” explained Bakulin. Kislovodsk is in the Causacus and lies at 1500m above sea level. It is here that the race walkers live an ascetic life, covering 280 kilometres a week.

“It is tough, but we survived,” said Bakulin.

Kislovodsk is an old training centre created especially for the 1980 Olympics. It has recently been modernised.

The walkers have a special route with descends 500 metres and rises 500 metres and it is on this devil’s anvil that this gold medal (and silver in the person of Denis Nizhgorodov) was forged.

“If you want to be a champion, you need to train to your maximum,” explained Bakulin. “You need to train at the edge of your capabilities. After such training, everyone has an injury of some sort.

“We don’t compete against each other in training, we all have our own goals,” added Bakulin.

Living in such close proximity for a month creates a special bond. “It means that I even wanted to help Kirdyapkin (the defending champion, who dropped out after 30km injured) when I was walking,” explained Bakulin.

The early leader was Nathan Deakes of Australia, returning after four years of on-off injury. At the half-way stage the Australian had built up a 31-second lead. Was Bakulin worried? “No, I wasn’t really following what Deakes was doing. My plan was to follow an even pace so when he went off fast I disregarded him."

“I was not paying too much attention to positions, but times, so I was not too concerned.”

It is a measure of the faith that his coach had in the Russian tactics that he shouted to Bakulin after just one kilometre: “It’s OK, stick to that pace and you will win.” A sort of Russian version of the Australian “No worries, mate”.

The heat at this time of the morning was 27 Celsius with high 80 percent humidity, not ideal for any normal person to exert themselves, but Bakulin was unfazed. “If it had been hotter, I would have gone more slowly,” he said.

Even he, though, is human and after crossing the finish line Bakulin managed one television interview with a Russian broadcaster before being led across the warm-up zone and sitting against a barrier.

Before long the cramps started and he was stretched out on the tarmac. After 15 minutes of treatment, a stretcher arrived and he was taken off to a nearby tent for further treatment.

“From my waist down I had no control over my body at all,” he said. “It is the first time I have experienced that. In the tent my blood pressure fell. I felt so awful, but after massage and ice packs from my masseur and coach I revived. They brought me back to life.”

Bakulin’s gold means that in the history of the 50km race walk at the World Championships, Russia has now drawn level on three gold medals with Poland who in the person of the inimitable Robert Korzeniowski amassed three titles between 1997 and 2003.

Bakulin hails from the small town of Insar in the Mordovian Republic and lives in Saransk with his wife and three-month old child.

“I am looking forward to going home,” he said with feeling. “It is my dream not to have to walk a step for a time.”

Financially, the rewards for Bakulin – apart from the $60,000 for winning in Daegu – will probably come in the form of a flat from the government of Mordova or an expensive Japanese car.

In the West it is possible for a gold medallist to get sponsorship and make money that way, but in Russia companies are not interested in sponsoring athletics, all the money going into football. Not even Yelena Isinbayeva has a Russian sponsor.

The 50km race walk is the toughest event on the timetable and yet it is arguably the least appreciated. How do the race walkers feel about the position they occupy? “Every event has something special, we are doing what we can to promote it,” said Bakulin.

So how does it feel to win your first major medal at the age of 24? “I’m still not aware of what has happened,” said a shocked Bakulin, still looking drawn from his efforts. “But the first major medal is very special. I am just happy right now.”

And when he is not training flat out and in what appears to resemble a religious retreat in the Caucasus, what does he do to relax? “Fishing. I fish in the Mordovian rivers,” offered Bakulin. “Fishing I understand very well.”