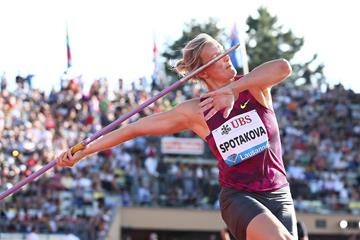 Spotakova aims to achieve what legendary Zelezny failed to do

Few athletes in history have been able to match what legendary javelin thrower Jan Zelezny has achieved. But this year, an athlete from his own training group could be set to accomplish something that Zelezny never managed.

What’s more, she could do it just one year after giving birth.

Barbora Spotakova has this year returned to throwing, having taken a break in 2013 to have her son, Janek, in May that year. Given her string of victories since getting back on the runway, it’s almost as though she has never been away.

Her appearances on the international circuit are all in preparation for this year’s European Championships in Zurich, where she hopes to achieve the one accolade that has so far eluded her.

In that regard – and in many others – her career draws many parallels with Zelezny’s. Both have won gold medals at the World Championships and Olympics and both are the current world record-holders.

While Zelezny achieved more of each of those accomplishments than Spotakova, he never managed to win a European title.

“Obviously the European Championships is a big goal,” said Spotakova after her victory in Lausanne, just three days after her 33rd birthday. “It’s a little bit easier because Christina (Obergfoll, the world champion) and Mariya (Abakumova, the 2011 world champion) have both recently become mothers so they won’t be there.

“But you can’t take anything for granted because there is always somebody new coming so I have to be ready for everybody. There could be somebody who can throw 70 metres.

“Of course it will be nice,” when asked specifically about potentially winning a title that her coach Zelezny did not. “I think about it definitely.”

Coach honoured when baby was born

Spotakova has major respect for Zelezny, so much so that her son’s name, Janek, was inspired by Zelezny’s first name.

The break also helped the former heptathlete both mentally and physically.

“Even though I was healthy all year, I didn’t know what to expect when I came back,” said the double Olympic champion. “I’ve had very good preparation for this year; it’s been the same as the year that led up to the Olympics. I knew I had prepared very well, but my technique is a bit different because my body is now a little different. After my first throw in Rome, I felt awful.

“It has definitely helped my body, though. I had been in the same cycle for 10 years, winning seven championship medals in a row. I was very exhausted after the Olympics, mentally and physically, so I was very happy that I became pregnant because it meant I could have a break.

“I stopped training, moved away from Prague and bought a summer cottage in the woods. I spent a lot of time walking with my dog in the woods, which helped clear my mind. It was a complete break. I was eager to train start training, but now I feel the tiredness again.”

Spotakova is fortunate to have the support of her mother, who assists by looking after Janek when Spotakova needs to train.

“I have a good system, you have to have a system,” she says. “My mum is retired and she loves babies, so she helps take care of my boy whenever I want. The summer season is a bit more difficult though because it varies between training and competitions.

“I used to be very tired during the season even before I had a child, but now I’m even more tired.”

Spotakova tried taking her son with her to her first competition of the year in Rome. Although she was pleased that Janek got to see her compete, Spotakova says that her one-year-old won’t be attending many of her other competitions.

“It’s difficult with the travelling involved with one-day competitions, so he won’t go with us again. It was nice to have him with us in Rome, but on the other hand, not having him with me during a competition means I get the chance to have a good rest.”

When asked whether Janek will follow in the footsteps of his javelin-throwing mother – or, indeed, the great man he was named after – Spotakova was quick to reply.

“Of course he could be a javelin thrower, if he would like to,” she said. “I think he will like it. Already he’s throwing sticks for the dog to fetch because he sees us do it, so I think he’ll try the javelin when he’s older. “

As for Spotakova, she feels that her best performances are yet to come.

“I haven’t had many competitions, but it’s great that I haven’t lost yet,” she said. “I’m throwing between 65 and 66 metres in all different conditions, so there must be some long throws coming. We hope for at least one big throw.”