Felix, the smiling assassin, already looking for next target

Earlier this year, the question plaguing Allyson Felix’s mind was all about risk.

Sure, the reigning Olympic champion could play it safe and stick to her specialist event – the 200m – but true development as an athlete, they say, is usually found outside your comfort zone.

No one knew this better than Felix.

The US sprinter had dabbled in the 400m often in recent years but in truth, it was only a mere testing of the waters, dipping one foot into the longer event but always keeping herself grounded in the 200m, an event she has such an attachment to that she calls it her ‘baby’.

A year out from the Olympics, with the prospect of a 200m/400m double looming on the horizon, Felix and coach Bobby Kersee decided last month that it was finally time to go all in on the longer sprint.

“It was a joint decision,” says Felix. “Bobby had seen my training and he believed I could do it. When he says something, I believe it, so I wanted to challenge myself.”

Because of the timetable at the IAAF World Championships in Beijing, a double was unfeasible, so Felix knew that focusing on the 400m would mean deserting the 200m – abandoning her baby, at least for now.

Ultimately, it was a risk which paid off in fine style as Felix scorched her way around the track in the Bird’s Nest Stadium and claimed her first global title over 400m.

In the final, Felix rocketed out of the blocks and swiftly ate up the stagger on Christine Ohuruogu of Britain outside her. When Felix entered the back straight well out in front, she began to coast, her elegant stride floating over the ground and enabling her to conserve energy for the second half of the race.

“The plan was to take advantage of my speed,” says Felix. “I’m a sprinter so I wanted to take that to the 400m and then just trust in my fitness coming home.”

Her winning time – a personal best of 49.26 – had left her four metres clear of the best quarter-milers in the world.

It was safe to say the risk paid off.

Felix, 29, has always been a hard worker and assiduous trainer, but with the emphasis on the longer sprint his year, things have been even more gruelling.

“It’s torture,” she says. “But like Bobby always says, it pays off.”

Someone who can testify how hard Felix works is Joanna Hayes, the 2004 Olympic 100m hurdles champion who is currently coaching at UCLA and is an assistant coach to Kersee’s group.

“When we trained with her we’d wonder how she was doing this,” says Hayes. “It always looked so easy to us but she’s such a hard worker, positive and humble.”

Though Hayes says Felix’s polite, sunny-side-up nature is a genuine reflection of her personality, she believes it also hides a toughness few associate with her.

“She’s a killer,” says Hayes. “A nice killer. From the day I met her 11 years ago, she hasn’t changed at all. I talk to a lot of athletes and we always say everyone roots for Allyson because you just can’t root against her.

“Her humility is the best thing about her. She’s an amazing person in general, but when she gets on that track, all bets are off. She’s very tough.”

Felix has needed that fortitude throughout the year to cope with the demands of Kersee’s training. A typical day will see her show up at the track at 10am, warm up for an hour and then complete an hour-long workout. Later in the day, it’s into the gym – Felix does weights four times a week, and can lift much more than her slight physique would suggest.

“There’s been more volume this year,” says Felix. “I’m sure my speed has suffered a little bit because I haven’t had that ballistic work in the 100m but I know it’s still there and I can tap into it when I need to.”

Having taken gold in Beijing, she will cap her season with a 200m at the IAAF Diamond League in Brussels on September 11 and after that, Felix will take six weeks off before gearing up for the 2016 campaign.

“I step completely away from the sport,” she says. “I’ll take a vacation, take time for myself. That’s what keeps me fresh and excited to come back.”

And when she does return, the question on everybody’s minds will be whether she plans to attempt the 200m/400m double in Rio.

“If the schedule is right and I’m feeling good and my body is right, that’s what I want to attempt,” says Felix, “but it has to be one of those perfect storms. Ideally, the 400m would have to be first, because I’d have to have the legs to do it.”

With four Olympic gold medals and nine world titles to her name, Felix is one of the most accomplished athletes in the sport, but just how does she keep the fire lit after all these years, all that success?

“I love the sport,” she says. “I’m passionate about it and I thrive off competition. I love to win and that’s enough of a challenge for me to keep going. To me, that’s what being an athlete is all about.

“There’s always another goal to accomplish.” 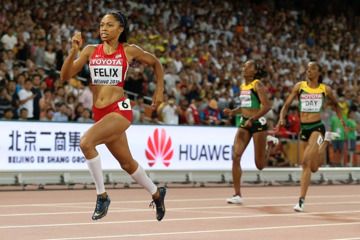