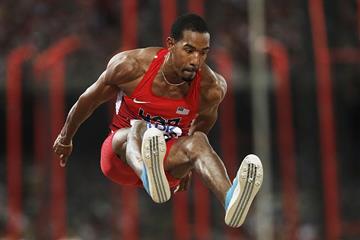 Taylor aiming to take his triple talent from Beijing to Brussels

Christian Taylor came close to writing a new chapter in the men’s triple jump when he hopped, stepped and jumped out to 18.21m at the IAAF World Championships, Beijing 2015 to take his second world title four years after his first global triumph in Daegu.

His effort, the second-best jump in history in the last round when he had to respond to Pedro Pablo Pichardo taking the lead away from him with the previous jump, was just eight centimetres off the 20-year-old world record set by Jonathan Edwards at the 1995 IAAF World Championships in Gothenburg, Sweden.

“You always need something special to get on top of the podium in the triple jump with so many phenomenal jumpers," said Taylor. "To see Nelson (Evora, from Portugal) jumping like this scared me a little bit because I remember watching him at the Beijing Olympics in 2008. He pushed me to jump that distance."

What makes it even more impressive is that Taylor took off more than 11 centimetres behind the plasticine, which makes the arithmetic simple. He could potentially have taken the event into new territory.

“But I cannot complain about missing the world record," added Taylor. "You cannot be disappointed with a jump like that. It is never possible to be perfect on the board. I am grateful that it was enough to win. I broke the US record (improving Kenny Harrison’s 18.09m mark set at the 1996 Olympic Games).

“It was a great fight. I saved it until my last jump. When you are that close to a record, it makes you hungrier. Everything is possible on the last jump. It’s absolutely amazing. The track in Beijing is really special. I set a PB and I was close to the world record. That’s what championships are about.

“One of the first people to text me was Kenny Harrison," added Taylor. "He said ‘Finally!’ Despite him being the American record-holder, Kenny has always been supporting me, telling me I could beat his mark. He’s been telling me that since 2011.”

If 2014 was dubbed ‘The Year of the High Jump’ by many pundits, then 2015 will be remembered by fans as the year of the triple jump, highlighted by several fabulous duels between Taylor and Pichardo.

It all began at the opening IAAF Diamond League meeting in Doha back in May when Pichardo won with 18.06m to Taylor’s 18.04m, both men setting what was then personal bests in the first ever competition to see two men beyond 18 metres.

In their second head-to-head battle in Lausanne, Taylor leapt a personal beat of 18.06m to his beat his Cuban rival and Taylor won again in Monaco, this time by a close margin with their respective distances being 17.75m to 17.73m.

After his win in the World Championships final in Beijing, the US star now leads 3-1 in their head-to-head clashes this year, and 4-3 in their career when one or the other has won the competition.

“Climbing up the all-time list is exciting and there is still more to come. I am looking forward to competing in Rio with my rivals.

“To break the (world) record is all about details," he added. "The standard of triple jump is phenomenal. Having all these guys who push me really raises the level. Every time I step on the track is a new opportunity. To see these guys jumping 18 metres, I don’t want to be left behind. I knew I needed something special because Pichardo is a phenomenal jumper."

Taylor admitted that jumping 18.21m was not something that he envisaged when he switched his lead-off leg at the end of 2014. “I have made baby steps. Every time I get a personal best is a new experience. Changing up has really benefitted me."

A change was necessery to reduce the pain he was suffering in his knees.

"People around me would say, 'You've won so many things, can you not continue through the pain?' but it was at the point that it was either I try to blow out my knee or I just give it up,” he told reporters at at the time.

There is still some residual pain but that was considerably eased by his feats in Beijing and will be dulled further if he can take the Diamond Race in his speciality.

At the IAAF Diamond League final in Brussels on 11 September, he will again face Pichardo.

The Cuban is now leading with 16 points to 14 in the winner-takes-all contest for the Diamond Trophy and the US $40,000 cheque but if Taylor can get a win in the Belgian capital then he will take take his fourth consecutive Diamond Race title.