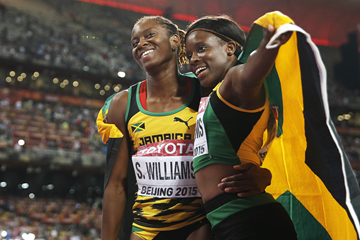 Williams sisters keeping up family tradition in the sprint hurdles

When it comes to making athletics a family affair, no one can better the Borlees. Brothers Kevin, Jonathan and youngster Dylan were all in Beijing and competed together in the 4x400m, the two older brothers having reached the semi-finals in the individual event.

But the Borlees were not the only high-profile siblings here as the final of the 100m hurdles saw athletics’ own Williams sisters getting into the act, with victory going to Jamaican 22-year-old Danielle in a personal best of 12.57, and 25-year-old older sister Shermaine finishing seventh in 12.95.

Britain too had sisters involved in the event, with 27-year-old European champion Tiffany Porter finishing fifth in 12.68, and her younger sister Cindy Ofili, 21,  finishing sixth in her semi-final in 12.91.

Something of a coincidence. But then this event has been curiously “sibling-rich” over the years. Swedish twin sisters Susanna and Jenny Kallur (the older by four minutes) were a major force in high hurdles a few years back, particularly indoors.

Susanna, who holds the world indoor 60m hurdles record of 7.68, set in Karlsruhe in 2008, won gold at the 2006 European Championships on home soil in Gothenburg.

At the previous year’s European Indoor Championships in Madrid, she won gold in 7.80 – a title she would successfully defend two years later – with Jenny taking silver in 7.99.

The parallels between these twins – whose father is ice hockey player Anders Kallur, who won four Stanley Cup championships with the New York Islanders – extended beyond the track.

Before concentrating on athletics, both were members of the Swedish junior national gymnastics team. And in 2008, bizarrely, they suffered identical stress fractures in their shin.

A quarter of a century before these twins were on track, Polish sisters Grazyna and Elzbieta Rabsztyn were making a name for themselves in the high hurdles. The bigger name was that of Grazyna, who set two world records in the 100m hurdles, clocking 12.48 in 1978 and reducing that mark two years later to 12.36, which remains a Polish record and still sees her in the all-time top 10 performers.

She also won the IAAF World Cup in 1977 and 1979, and the Summer Universiade on three consecutive occasions between 1973 and 1977. In 1981, her sister took bronze in the latter competition.

As far as the Williams sisters are concerned, the record between them now stands at eight wins each – but it seems the balance has tipped significantly towards the younger sister, who also set a personal best of 12.58 in qualifying fastest for the final, and who prepared for these championships by winning the World University Games title.

Williams is studying Business and Sports Management at Johnson C Smith University in Charlotte, North Carolina, from which Shermaine graduated in biology.

Both train in North Carolina with coach Lennox Graham, getting back home to see their family in Jamaica whenever they can.

In the wake of her victory in a final which – contrary to all expectations – ended with no US athlete in the top three (defending champion Brianna Rollins finished fourth), the gold medallist was bubbling with excitement, although much of it was on behalf of other members of her family.

“It is an amazing feeling having your sister competing with you and against you, especially when you both reach the final at the Worlds,” she said. “I’m more than happy to be racing against her here. She is a great competitor. She is my sibling and she is the person who pushed me to start in athletics. She was first to congratulate me after the finish. She said ‘Great going, proud of you.’

“I have to give thanks to her for guiding me on this path. We train together every day, compete together, share all these moments together. It was so special that we were together in this final. There will be a big celebration for sure as soon as I get home. My family is dancing, shouting, celebrating – it seems they are even happier than I am.

“I’m training with Lennox Graham and I stay there for about 11 months during the year. But I think winning the Worlds is great reason to visit my home, even for a short stay!”

All the predictions before the seventh day of competition – when 2008 Olympic champion Dawn Harper Nelson of all people failed to negotiate hurdle two in the semi-finals, and Keni Harrison was disqualified from her semi for a false start – were for a US victory.

The eventual winner explained how she also had not foreseen a medal, never mind a golden one.

“Going to Beijing I had only one dream; I wanted to make it to the final,” said Williams. “After the Jamaican trials, my coach let me go to the World University Games and then come back directly for training. I think that was the right decision as we were able to prepare for Beijing as thoroughly as we needed.

“I am sure when I came here nobody knew who I was. But this is the World Championships, so once you stand on the start line, anything can happen. There are 10 hurdles and there are no real favourites or rivals. I just tried to fix whatever my mistakes were.

“When I crossed the line, I had no idea I had won. Then I just saw my name up there on the big screen and it was a great feeling. I still cannot believe it.”

After her trip back to Jamaica to celebrate, attention will return to the impending Olympics, where there'll be much higher expectations.

"I won't focus on the expectations. I'll continue to be my level-headed self," she said. "Hopefully in Rio 2016 I'll be Olympic champion.”