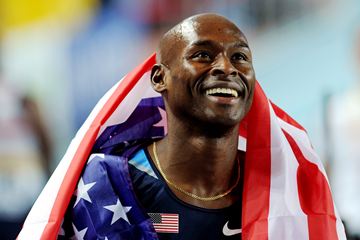 Portland and Rio will be Lagat’s final championships

All good things must come to an end. A month after turning 41, Bernard Lagat knows that his racing days are numbered.

“After the summer of 2016, I don’t plan to retire, but my track career will be over completely,” said Lagat. “I have to be honest to myself; I’ll be nearly 42 by then so I’ll be very happy to run.”

Lagat has represented his country – initially Kenya and then later the USA – at 15 global championships over the past 16 years. He has taken 13 medals from those championships, five of them gold, but he is not quite finished.

“I think I’ve got a high chance of making it on to the podium. I believe that if I run like I did during the 2015 indoor season, I should be good. But again, I have to make it into the top two at the US Nationals, so my training is geared towards that and the World Indoors.

“I’m thinking about the guys I’ll be racing against in Portland and I know it’s going to be fun. The thing that will make me satisfied in bringing my indoor career to an end is making it on to the podium. And that’s why I’m taking it seriously; even more seriously than in the other years.

“It has that fun factor to it and makes it tough,” he added of the 3000m distance. “It’s definitely fun for me and I don’t shy away from competition or the quality of the field. If anything, I’m more excited when we have strong line-ups.”

The IAAF World Indoor Championships Portland 2016 isn’t the only major event that Lagat is targeting this year.

When Lagat made his Olympic debut just a few months shy of his 26th birthday in 2000, few would have believed that he’d be able to fit in many more appearances at the Games before retiring. But with the Rio 2016 Olympic Games less than 200 days away, Lagat believes he can make it to his fifth Olympics.

“I would like to go to this one a lot more,” he said. “This would be my fifth one and it’s also going to be my last one.

“I would have retired at the end of the 2015 season, but something inside was telling me, ‘Why retire one year before the Olympics? You can still do this’.

“I’ll be going to the US Trials to do my very, very best to make the team. But it’s not a given like before. The US runners have stepped up and they’re highly ranked. They’re fast, young guys, so it’s not easy for me. But if I make that top three, oh my, I’ll be celebrating.”

He may have made more championship appearances than most over the past decade, but Lagat is aware that he will have to earn his spot on the team. With the USA’s first-three-past-the-post selection policy, nothing is a guarantee. Lagat found that out the hard way last year.

“It actually started better than 2014,” said Lagat. “I felt so bad at the Pre Classic in 2014, but when I went back this time, I was much better and finished fourth. From there, everything was okay until I went to Birmingham. I expected to run under 3:40 there but I ended up running 3:41.

“I later discovered I was catching a virus, which is why I wasn’t able to race in Oslo five days later,” he added. “I flew back to the USA a week and a half before the US Nationals and my body was not feeling well at all. I started getting into good training a few days before the Trials, but by then it was too late.”

He finished 10th in the 5000m at the US Championships, nine seconds behind the winner and a long way from making the team for the IAAF World Championships Beijing 2015. It was the first time since 1999 that he had failed in an attempt at making a national team.

But Lagat didn’t spend too long wallowing in despair afterwards, and after a couple of weeks he was back racing in Europe.

At times, though, he has considered changing events in a bid to improve his chances at major championships.

And given the way championship races can play out in that event, it would be foolish to rule out someone with Lagat’s experience and racing armoury, even if he is the ‘wrong side’ of 40.

The secret to long-term success

Lagat knows that he is fortunate to have never been hit by a career-ending injury, but that is just part of the reason behind his longevity.

“Being able to train injury free is the most important thing,” he said. “When you do that, you’re able to really do any kind of training you want. You can do long runs and you can go hard on tempo runs without feeling as though you might injure yourself.

“Being smart also helps,” he added. “I don’t race so much, and when I do race, it’s what we’ve planned way in advance. It means that when I’m training, I know I’ll be doing about three serious races and that’s it. The bulk of my time is dedicated to training.

“I’m always thinking ahead. For example, with the World Indoors, I know that if I don’t train hard, how am I going to perform against the young guys? Guys who are training like me, some of them are maybe even training better than me.

“If I train sub-par, it will show in my competition. So I wake up thinking that I have to go hard in training, knowing that this is the only way to do it. And when I train hard, it feels good afterwards, knowing that I’ve nailed it. I’d usually follow a session like that with an easy day and then bang it hard again in the next one.

“But it’s also down to having the right people,” he said. “My coach is really smart. It’s a combination of all the things, even the support from my family, which keeps you moving.”

While he intends to hang up his spikes after the summer of 2016, he will simply replace them for racing flats.

“The next thing I’ll be venturing into is road racing,” he said. “We have all these road races in America which I’ve always wanted to do. I still want to be competitive but I want to have fun also.”

When he embarks on this next chapter of his career, he also wants to run a marathon.

“I’ve always said I want to know what 26 miles feels like,” said Lagat, whose longest training run to date was 16 miles. “But it’s not going to be competitive, I won’t be doing it for the money, it’s just to say that I ran a marathon.

“Any distance shorter than that, I’ll still be running seriously.”

The same applies for any distance on the track he may contest in Portland or Rio.