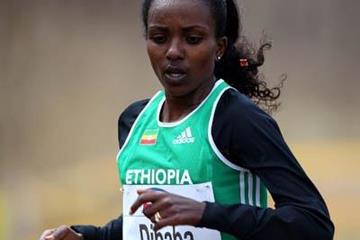 It was not Ethiopia’s day at the World Cross Country Championships in Bydgoszcz, their men were well beaten and the best their women could do was a senior bronze by Meselech Melkamu. One place later came former champion Tirunesh Dibaba, but at least she made a healthy return to World Championship competition and gained a team silver.

For 29 seconds she joined Worknesh Kidane as the most decorated woman in World Cross Country Championship history with 20 medals.

Then Kidane crossed the line herself in the forest of Myslecinek to increase her total to 21.

Memories from Ostend and Dublin

The day before the race we had rare opportunity of a one-to-one with the most successful female runner of the past decade. She recalled through interpreter Sabina Yohannes her cross country origins and talked of the future and what might have been in Berlin 2009.

On March 13, 2001 Paula Radcliffe got all the headlines when she finally won at the hastily-arranged World Championships in Ostend. An hour or so earlier, Tirunesh Dibaba Kenene had placed fifth in the junior race and help Ethiopia to team gold. What does she remember from that occasion?

“I ran barefoot in that competition,” she explained. “And what I remember the most is the cold because to this day I don’t think I’ve ever experienced cold as bad as what I experience on that day. That is my most lasting memory, of the cold.”

She progressed from fifth to silver in Dublin 2002, losing out in a sprint finish to Viola Kibiwott of Kenya.

“In 2002 it was my second world cross country competition, and at that point I was wearing shoes and it was at the very end, practically at the tape that she beat me. I was still fairly new to running, I was very happy with my result.”

The rest really is history, because she effectively left the junior ranks after winning the World Junior Cross Country title in Lausanne 2003. Within five months she was World champion at 5000m and went on to win 17 senior World or Olympic golds culminating with her double long distance win in Beijing.

Later that year she married her compatriot Sileshi Sihine, but from then there were no more medals, until Bydgoszcz. She spent 2009 with a series of injuries, but just as she was ready to defend her World 10,000m title injury struck again.

“It was the underside of my [left] big toe,” she revealed. “I got an injury there about a week before the Berlin World Championships and I was unable to run.”

So how does she think she would have fared had she been able to start?

Sadly married life has co-incided with injury for both “Tiru” and Sileshi.

He missed the whole of 2009 with a calf injury and he of course was sorely missed in Bydgoszcz.

“Yes he’s been injured and missed competitions for that reason,” explained his wife, “but now he’s better and he’s been training fully. I expect that he’ll be running well on the track.”

With him having so many silver medals (mainly behind Kenenisa Bekele), is there any spousal rivalry given that her honours have been primarily gold.

“I don’t think that it has made a real difference, however I train well just like I used to. It’s since then that I broke the 15km World record and I also expect that I’m in really good shape now, so we’ll see.”

Saying “good” shape is something of an understatement with regard to her 15km because she shattered the previous World record with a 46:28 clocking in Nijmegen on November 15, 2009, her final 5km taking just 15:05. Yet she is not switching to road running like her cousin Derartu Tulu, nor does she wish to move up in distance just yet.

“I’m most comfortable on the track,” she admits. “I really enjoy running on the track, especially the 5000m which I like very much.”

And it is on the track where we have seen Dibaba at her glorious best, bursting ahead at the bell and running down the back straight as if with fresh legs, covering the final lap quicker than most of her rivals could manage for 400m from blocks.

It’s a turn of speed which is her trademark and has only been beaten by the great Meseret Defar at her very best. So how does she do it?

“It’s just a dream I have to run for a long time and if I’m healthy and still competing well, to compete many times, but the date of 2024 doesn’t come into it at all.”