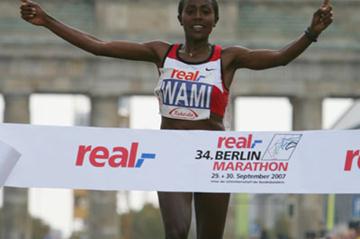 Robert Cheruiyot dined on salmon for lunch in an exclusive restaurant in Central Park yesterday then collected his cheque for US$500,000 as the first men’s winner of the World Marathon Majors. What contrast to a few years ago when, abandoned by his parents and living a life of poverty, he could afford only one meagre meal a day.

As the first women’s winner of the World Marathon Majors, Gete Wami also collected a cheque for $500,000. She, too, could never have imagined such wealth many years ago. She was once “out of this world with happiness” at her first month’s salary of ETB127 (US$14) with Omedla Police Sports Club.

Now that the first winners have been crowned, subsequent champions will be determined every year, as each two-year cycle overlaps. It means that Martin Lel, with victories in London and New York in 2007, and Wami, with a first place from Berlin and second place from New York, lead at halfway in the 2007-2008 series. US$1m is paid out at the conclusion of each scoring period.

‘I promised myself that one day I would be like Tergat’

Now aged 29, Cheruiyot was abandoned as a boy by his parents, who left him, and his older brother, Stephen Biwott, to fend for themselves. Taken in by relatives, Biwott ended up with an uncle, Cheruiyot with his grandmother.

Recalling his circumstances between winning his 2006 and 2007 Boston Marathon titles, Cheruiyot said: “Life was not good. We used to eat food once a day. In the morning we had tea and milk. There was no sugar because there was no money.

“We had no lunch. For dinner there was ugali and milk. We had no meat, no vegetables.” Moving on to live with his mother’s cousin, in return for having his school fees paid he carried out chores.

Cheruiyot milked the cows, prepared breakfast for the children before school, went to school himself, and returned to make lunch. “This was women’s work but it was what I must do to survive,” he said.

Claiming that he was kicked out, he walked 60km from his village of Mosoriot to Iten to ask his brother, who had become a policeman, if he could pay his school fees. Realising that his brother barely had enough to feed himself, Cheruiyot walked back to Mosoriot the next day.

A friend there gave him work in a barber’s shop, cleaning and touting for customers for Sh20 a day. It was sufficient for only the most basic of meals. His break came, though, when a distant relative took pity on him and took him in.

“Unlike the others, this one took me as her own son,” Cheruiyot said. “For once I felt very wanted. Having been an athlete in school I started to train.” His guardian bought him kit and he joined a training camp run by Moses Tanui, twice winner of the Boston Marathon.

“The turning point was when Paul Tergat visited the camp,” Cheruiyot recalled. “I looked at the man and promised myself that one day I would be like him.” Tergat gave Cheruiyot a pair of running shoes and some advice, saying he had the potential to make a fine runner.

Asked today how he would spend the money, Cheruiyot replied: “I am not ready to say anything now. I want to focus on the coming races, so I don’t think about what I have. I want to think about my career.”

For Wami, too, these are changed days. “In my life I never anticipated reaching this kind of achievement,” she said today. “I’m so happy to be the first World Marathon Majors winner. I came to New York to win the jackpot and I did it.”

Wami put herself into contention for the jackpot by winning the Berlin Marathon then, only 35 days later, finished second behind Paula Radcliffe in New York. While Radcliffe made a stunning return only 10 months after giving birth to her first child, success in the marathon after motherhood took longer for Wami.

“After I had my child it took me three or four years to recover,” Wami said. “I had leg pain and back pain as well so I was impressed that Paula was able to train during her pregnancy and even more impressed that, so soon after the pregnancy, she was able to perform well and to win.

“Running a second marathon in 35 days, and coming in second, I feel was quite an achievement for me.” Wami ran 2:22.20 in 2002 but, since giving birth and getting over her injuries, she has improved her personal best to 2:21.34, set in Berlin last year.

Asked how she would spend her winnings, Wami said: “Initially I hope to help my family and from there on help some orphans. I want to help educate them and see them through their future. There are established orphanages I would be willing to give money to.”