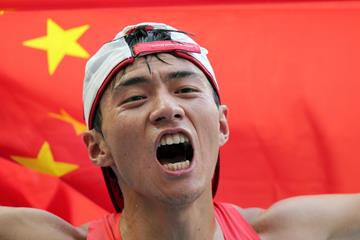 Chinese race walker Chen is one in a billion

Clearly what China needs for continued success at race walking is 100 words of Mandarin and a guitar-toting talent.

The strummer playing a happy tune is Olympic champion Chen Ding who followed up his gold medal along The Mall with a fine silver at the IAAF World Championships at Moscow in August.

If anything, his second-place finish in Russia behind hometown favourite Aleksandr Ivanov was more laudable than his London triumph when he became the youngest ever gold medallist in a race walking event at the Olympics.

Plagued by niggling injuries throughout 2013, the native from Hunnan province on the old Silk Road overcame them all to land a second major medal – and he is barely 21.

Overseeing stage one that took him top of the podium in sight of Buckingham Palace was famed Italian coach Sandro Damilano.

The Italian is now ready to launch an assault on the IAAF World Race Walking Cup that takes place in Taicang next May.

In fact, the unlikely pairing of Italy and China has been achieved on 100 ‘technical’ words over the last four years since Damilano was charged with looking after the country’s finest.

The coach’s grasp of Mandarin amounts to a mere ton of words – which is 100 more than every Chinese walker knows of Italian, he reckons, despite spending most winters at Damilano’s Italian base of Saluzzo, south of Turin.

“The Chinese don’t speak a word of Italian, even after all these years of training in Italy,” said Damilano.

“Fortunately, they have a very nice manager who brings them over to Italy and he speaks very good English and we manage to communicate in a third language.”

Different to the rest

Chen, it appears, is the most westernised of the group. Not only does he give his guitar a thrum as he whiles away Italian evenings, he even takes a day off training when the mood catches him.

The race walker often bucks the regimentation put in front of him, and ventures forth for a night out in both in Italy and China.

Exactly how he does this when in Damilano’s homeland, the coach is far from sure given the language difficulties. But nonetheless he stands out from a talented throng, and not just because he wins medals.

Chen is one of those rare breeds of athlete that Christine Ohuruogu understands only too well. Only at her best when it matters, the World champion and 2008 Olympic gold medallist would find a kindred spirit in Chen, according to Damilano.

“Before big races he concentrates really hard,” explained the coach. “If the objective is big like the Olympics or the World Championships, Chen is able to concentrate and give his best and becomes, for want of a better word, very grounded.

“He overcame a sciatic nerve problem to compete in Moscow that followed a very indifferent season until the race.

“He had rarely beaten Wang Zhen, another of the walkers I coach, before London. But even though he was still a teenager before the race, Chen’s focus was very mature.

“When he competes in minor races his training is not so intense, and it doesn’t matter what you say.”

Not that it appears the coach could make himself understood during the World Championships 20km in Moscow – even if he was shouting for all he is worth.

That language barrier was the possible downfall of Wang, his other protégé. Unaware he was incurring the judges’ displeasure, Damilano attempted more hand gestures than a traffic cop to stop the impending crash without success.

The coach shook his head sorrowfully.

“It isn’t easy communicating, but it becomes more serious when you want to say something instantly,” said Damilano. “It’s happened more than once and we’ve lost least maybe two medals in the past for much the same thing.”

Moving back to Chinese training base

But even though communication on a personal level is a bit of a struggle, Damilano has got things nailed down when it comes to organisation.

Looking towards Rio and the 2016 Olympics, there will be three groups of top walkers from China. The Italian will look after one group of five, and two Chinese coaches will tend to the progress of another six split between them, with lesser groups hoping to break into the elite.

The vast distances and tough logistics of travel have resulted in two main training camps on home soil. The first, Lijiang, is at 2400m and is in Chen's Yunnan province, about 200kms east of the border with Myanmar. The altitude training is a fundamental part of the Damilano programme.

The second at Qingdao is at sea level and on the opposite eastern side of the massively huge country. But the state-of-the-art facility also houses the Chinese national football team from time to time and has every facility money can buy.

Chen has been passed to one of the other coaches, but all groups arrive in Saluzzo sometime in January and stay until April. The sight of Chinese race walkers knocking out six-minute miles is a common sight to locals, although Damilano reckons the elite groups should be even bigger.

“When you consider this is a country of a billion people, it’s a surprise there are relatively few who have made it to the very top.

“However, I have discussed this with the Chinese federation and put suggestions in place. Maybe in the future we’ll see a lot more and a big domination by China in race walking.”

Will we see Chen tackle the 50km next year at the IAAF World Race Walking Cup or at the 2016 Olympics in Rio, perhaps?

“That would be up to his new coach, but I don’t think so,” explained Damilano. “This talented athlete is all about quality – not quantity.”