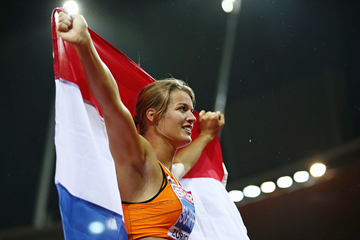 Schippers the sprinter has sights set on special moment in Beijing

When Dafne Schippers eventually had to choose between her two great loves – sprinting and the heptathlon – the Dutch athlete simply followed an age-old piece of sporting wisdom: listen to your body.

“In the heptathlon,” she says, “I always have problems with my knee and it frustrates me a little bit, so I’m very happy with this decision. The 100m and 200m is more in my nature.”

Schippers – a world bronze medallist in the heptathlon in 2013 – announced last month that she will compete only in sprint events this year, a decision she hopes will give her a better chance of reaching the podium over both 100m and 200m at the IAAF World Championships, Beijing 2015 later this month.

To those following Schippers’ rapid progression in the sprints in recent years, the decision came as no surprise.

Schippers shone in the sprints as a youngster, clocking national junior records of 7.28 for 60m, 11.19 for 100m and 22.69 for 200m in 2011, and reaching the semi-finals of the longer sprint at the IAAF World Championships in Daegu that year.

But what made those sprint performances all the more impressive was that Schippers was still primarily a heptathlete back then, dividing her time between seven events. She probably would have specialised in the sprints earlier had she not been so good at the heptathlon.

At the 2011 European Junior Championships, for example, she won the heptathlon with 6153, but her marks in the 100m hurdles, 200m and long jump were all superior to the winning marks in the individual events at those championships.

Since that season, Schippers had continued to divide her focus between the sprints and heptathlon, but she knew that at some point she would have to choose one over the other.

In May earlier this year, the 23-year-old obliterated the Dutch 100m record at the FBK Games in Hengelo, running 10.94. A week later, she went to Gotzis for the Hypo-Meeting heptathlon – her first of the year – but withdrew before the 800m due to a knee injury, one which often rears its head when Schippers tackles the high jump.

She may have been a world junior champion in the heptathlon and a world bronze medallist at senior level, but earlier this year Schippers became increasingly aware of the toll world-class combined-eventers must pay when it comes to injuries.

That performance was the game-changer; a run which both surprised Schippers and proved to her she could compete with anyone in the world. “Bizarre,” she said repeatedly in her post-race interview. “There is no way I could have thought this was possible.”

All of a sudden, the modest, relatively unknown girl from Utrecht was a national sporting hero.

“All the people know you because you’re in the newspaper,” she recalls of the difference those championships made to her profile. “When I walk on the street, people say: ‘hey, that’s Schippers!’ It’s nice, though. It’s special.”

In her first IAAF Diamond League outing since turning her attention to the sprints, Schippers finished fourth in the women’s 100m in Paris on July 4, running 11.02 in a race won by Jamaica’s Shelly-Ann Fraser-Pryce in 10.74.

“It was not very good,” she said afterwards. “The start was very bad but it’s okay for now.”

Since making her decision, Schippers’ start is an area she has been working hard to improve. Standing at 1.79m (5ft 10in), she’s considerably taller than most of her rivals and is unsurprisingly not as swift emerging from the blocks.

“I’m a little bit long,” she says with a laugh. “The 200m is a little bit better for me because my start is not very good.”

Since her fourth-place finish in Paris, Schippers finished second over 200m in Lausanne and Monaco, clocking a season’s best of 22.09 in the latter, and last weekend she reduced her Dutch 100m record to 10.92 when winning in London.

More recently, she won the Dutch 100m title in 11.02, underlining her new-found consistency at the 11.0 level.

With less quantity in her training – Schippers previously trained nine times a week but now trains six to seven times – she’s hopeful that the more specific sprint training and extra recovery time will allow her to improve enough to top the world in Beijing.

“I hope to run faster,” she says. “I run a little bit more than I did, but it’s 80% of the same training. I hope I’m a little bit more relaxed and can focus on my races because I don’t have to do the high jump, long jump and throwing events.”

Given she is used to doing seven events at championships, competing in just two in Beijing holds little fear. “I think it’s good for me,” she says of her plans to double. “My body can do that. It’s fine.”

Having finished second to Felix over 200m at the IAAF Diamond League meeting in Lausanne earlier this month, running 22.29, the change in focus already seems to be paying dividends for the 23-year-old.

Along with sprinting, Schippers is keen to keep up the long jump as an individual discipline, an event in which she holds the Dutch record of 6.78m. “I will compete in the long jump,” she says. “Not in Beijing, but maybe next year.”

If Schippers ever needs a reminder of what lays in store in 2016, she need only look in the mirror. Hanging around her neck is a silver necklace with the Olympic rings, a treasured gift given to her by her parents after the London Games in 2012. “It was a special moment,” she recalls.

And with her sights now trained solely on success in the sprints, there should be many more special moments to come.