Denny chooses the right road and knows where it’s heading

For Australia’s 2013 IAAF World Youth Championships medal prospect Matthew Denny, the choice between a team and an individual sport came early and was made decisively.

Denny, who turns 17 on 2 June, grew up in a family of eight children, in the lush farming region west of Brisbane known as the Darling Downs. The biggest town in the region, Toowoomba, is 132 kilometres west of the Queensland state capital, Brisbane and that’s where he attends boarding school, a town which also has a passionate love of both codes of rugby.

However, two factors had a strong influence on Denny’s choice of athletics over rugby or football.

The first was watching his brothers sustain career-ending injuries while playing rugby, the second was the growing sense that he wanted to be in full control of his own sporting destiny.

Athletics – specifically, throwing; more specifically, discus and hammer – became his choice, and it has turned out to be a very good choice.

“I played soccer as a kid,” said Denny, “my four brothers (he also has three sisters) all played rugby.

“One, Jonathan, played with the (Brisbane) Bronco colts (junior) team, then tried out with Canberra. He has already had surgery on his shoulder twice and then shattered his wrist in a trial game with Canberra.”

Denny personally experienced the injury downside of rugby. “I went from soccer (to rugby) before I came to Toowoomba Grammar School. The year before I came to the school I broke my collarbone and was out for a couple of months.

“Then I played three school trial games and in each one someone suffered a serious injury. I didn’t enjoy that side of it.

“I made the decision to quit footy (rugby) and concentrate on athletics. The change to focusing on one sport made a big difference. I improved so much that year.”

In comparing team and individual sports, Denny says that your performance is totally under your control in the latter.

“The thing I like about individual sport is that whereas with footy (rugby) the result can be affected by just one person in the team not putting in and giving 100 percent, in an individual sport what you put in is more or less exactly what you get out.”

Denny recently won six events at the Australian junior championships, a unique treble of Discus, Hammer and Shot Put titles at both youth and junior levels.

“It was a fantastic feeling. No one had ever done it and I was very proud. It’s not being arrogant saying this, but if you win, it’s your own effort and that makes you proud.”

The IAAF World Youth Championships regulations limit competitors to two individual events so Denny will do the Discus and Hammer. He currently leads the 2013 world boys’ list with 67.28m in the former and trails only Argentina’s Joaquin Gomez, 81.88m versus 79.26m, in the latter.

It’s early days in the calendar year, to be sure, but it’s worth noting that only two youths threw over 67 metres in the Discus in 2011 and none did so in 2012 while, in the Hammer, there were only three over 80 metres in 2011 and four last year.

However, he is already looking beyond his trip to Europe this summer and ahead to next year’s Commonwealth Games in Glasgow and the Rio 2016 Olympic Games.

“My ambition has always been to go to an Olympic Games,” said Denny. “To be a great thrower, put my name in the history books.

Tracking Denny along his chosen path is Grahame Pitt, the veteran coach who also guided Justin Anlezark, who was fourth in the Shot Put at the 2003 World championships through the early stages of his career.

Pitt began his role with Denny four years ago after being approached by the young teen’s mother.

“I didn’t want to take him on, but she was insistent,” Pitt recalled.  “A lot of the kids from towns in the Darling Downs tend to be independent, and have a very good work ethic; their parents are prepared to travel for good coaching opportunities, even if it’s a three or four hour round trip.”

Pitt commented that what was immediately obvious about Denny, besides his talent, was that he was a, “nice young fellow with an extreme want to learn.”

“Technically (he is) very good. Some athletes are not willing to spend hours drilling; but if I take some of our simple sub-sets, where I break throwing movements down into drills and tell him to do one movement for an hour, he’ll do it.

“No questions, no nothing: he just does it. He has that focus and willingness to follow directions.”

Pitt believes speed is more important than strength for young throwers. “I pay no interest in heavy lifting (for Matthew). I want his body to develop slowly and securely, so he has something to go to. If we want, when he is into his 20s, we can go to lifting. If you lift heavy early, you tend to develop too quickly and reach a limit.”

As for Denny’s best event in the future, Pitt said it all depends on his growth.

“Technically, discus is going to be his best event, but at the moment he is about 188cm tall and 114kg. I’d like him to be a bit taller if he is to (develop into) an Olympic discus thrower.”

Whichever event ends up being his strongest, Pitt echoes Denny���s confidence that there is a bright future ahead for the young thrower.

“He is dead-set a future Olympian,” said the coach of Australia’s big medal hope at the 2013 World Youth Championships.

BACK
Pages related to this articleAthletes
Matthew DENNY 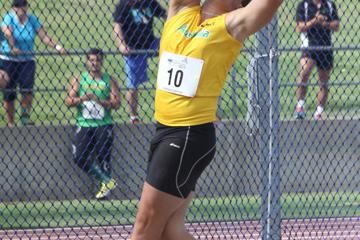 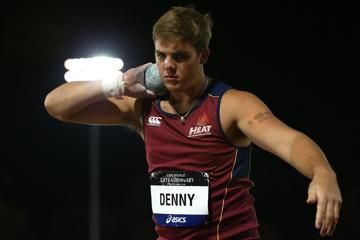 Denny throws out World Youth challenge in Per...