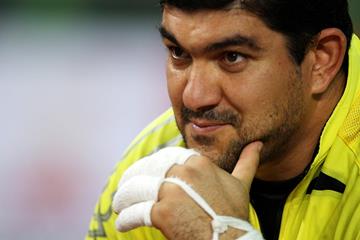 On a dusty track occupied by armed soldiers and military hardware in the Tajik capital of Dushanbe just a matter of weeks after civil war broke out, Dilshod Nazarov weaved in and out of armoured tanks and personnel carriers.

It was 1992, Nazarov was just 10 years old, and he was walking 10 kilometres to his nearest athletics track to train for the hammer. After 90 minutes of training, he’d head back home along the same route.

“Public transport in Dushanbe didn’t work and I had to go to training on foot,” he said. “I was always tall and strong and looked older than my peers, but I was still a child. I was still scared.”

Over a three-year period, Nazarov made that same journey three or four times a week. “Three years later, when I bought a bicycle, I was the happiest boy on Earth and my journey to training became much easier.”

Born into a sporting family, Nazarov’s mother Zaytuna was a member of the national handball team. Nazarov played tennis, football and basketball in his youth, but in 1992 a neighbour introduced him to the hammer.

He began to devote most of his spare time to training, but in 1996 when Nazarov was aged just 14, his father was killed in the mountains near Afghanistan during the enemy’s large-scale armed attack.

“It was a very difficult time for our family,” said Nazarov. “My mother had to work hard and I was ready to give up athletics to find extra income, but my mother insisted I continued my career. It’s thanks to her that I stayed in athletics.”

Nazarov parted ways with his first coach and he and his mother began to study a range of books on training, weightlifting and hammer throw technique. To this day, Nazarov remains self-coached with his mother offering an extra pair of eyes to pick up on technical mistakes.

One year after his father’s death, Nazarov finished third at the West Asian Games. “That is when I realised that hammer throwing would become a huge part of my life,” he said.

He married at the age of 19 and in 2002 his son Dalyer was born, followed two years later by daughter Amina. At about the same time, some local businessmen assisted Nazarov with funding, helping to cover training and travelling expenses. He also began to attend a three-month training camp twice a year in the Ukrainian city of Nova Kakhovka.

He soon began to reap the rewards and in 2003 Nazarov improved his PB by almost six metres. He qualified for the World Championships that year, but a back injury prevented him from competing. Further disappointment came in 2004 when he fouled all of his attempts in the qualifying round of the Olympics.

“I was very upset, but I wasn’t disappointed,” he said, “because I understood that I could throw much farther and be among the best hammer throwers in the world.”

Nazarov won the Asian Games title in 2006, but it was sandwiched between two below-par performances at the 2005 and 2007 World Championships. After the latter, he discovered he had a trapped nerve in his cervical spine. Once remedied, Nazarov continued his preparations for the 2008 Olympics.

Having improved his PB to 79.05m earlier in the season and chosen as his country’s flag bearer for the opening ceremony, Nazarov had high hopes in the Chinese capital. He made it to the final where he finished 11th with 76.54m, his best mark in a championship final up until that point, and realised afterwards that he needed more experience.

In Beijing he met with Czech manager Vladimir Maska, who was able to get Nazarov into some of the biggest meetings on the circuit. The following year in Uberlandia, Nazarov defeated the Olympic champion Primos Kozmus, setting a PB of 79.28m in the process.

“It was a time of rebirth for my international career,” said Nazarov, who went on to replicate his 11th-place finish from Beijing at the 2009 World Championships in Berlin and then ended his season with victory at the Asian Championships. That same year he was also made president of the Athletics Federation of the Republic of Tajikistan.

In 2010 Nazarov went back to the drawing board and addressed some faults in his technique that had been present since his early days in the sport. That summer he broke through the 80-metre barrier for the first time, won the Asian Games title and then finished second at the IAAF Continental Cup. His consistency was rewarded with a second-place finish in the IAAF Hammer Throw Challenge.

The following year was one of mixed fortunes as he finished a disappointing 10th at the World Championships in Daegu but ended the season with a PB of 80.30m in Zagreb, helping him to finish second once again in the IAAF Hammer Throw Challenge standings.

A shoulder injury in 2012 prevented him from performing his best at the Olympics. Doctors at the Games injected a special gel into the affected area, which helped Nazarov get through the qualification round, but the pain returned in the final and he finished 10th.

Nazarov began to listen to his body in 2013 and spent more time at home in Tajikistan, even inviting Czech friend and rival Lukas Melich to join him in a training camp in Dushanbe.

“Fatigue from long flights and frequent competitions began to take their toll on me,” said Nazarov, who regularly cooks for friends and family – usually making his signature dish, pilaf – the night before departing for an overseas competition. “I wanted to enjoy my family, my house and my motherland for as long as possible.”

In 2013 Nazarov improved once more to 80.71m and won the Asian Championships in Pune. But despite throwing 78.31m to finish fifth at the World Championships in Moscow – easily his best ever performance at a global championship – Nazarov felt he should have thrown farther.

“In training I was throwing the 6kg hammer over 88m, which meant I should have been throwing the 7kg hammer about 82 or 83 metres, but my technique that day was horrible,” said Nazarov.

In many ways, 2014 has been one of Nazarov’s best seasons to date. He has thrown beyond 80 metres on three occasions and five of his eight best career throws have been set this year. He recently finished fourth at the Continental Cup in Marrakech, beaten only by the three men who have thrown farther than him this season.

“I was more or less content with my season, but some technical problems forced me to take a break in competition to prepare for the Continental Cup,” said the 32-year-old, who was team captain for Asia-Pacific.

Before hanging up his hammer for the season, Nazarov will head to the Asian Games later this month in the Korean city of Incheon with the aim of winning his third successive title.

He will then turn his attention to next year’s IAAF World Championships in Beijing, where he will attempt to follow in the footsteps of countryman Andrey Abduvaliyev, winner of the hammer at the 1993 and 1995 editions of the championships.

His path to becoming global medal contender has been a long one – and one that is not yet over – but ever since his days as a schoolboy, walking miles through Dushanbe, Nazarov is no stranger to a long journey; however difficult it may be.

Liudmyla Iakusheva for the IAAF