Don Thompson looked anything but an Olympic champion.

Standing just 1.65m (5ft 5ins), skinny and bespectacled with an unassuming air, he looked every inch the insurance clerk that earned him a living.

Even his race walking style was awkward: all choppy stride; forward lean; and topped by a head tilted to one side. No one criticised it more than Thompson himself.

He even became a race walker by accident.

In March 1951, he switched from a road relay to a race walk for his club, Thames Valley Harriers, and won. His début was over five miles, but he soon discovered the farther he went, the more successful he became.

Thompson may have appeared meek and mild, but with the veneer peeled back, a fierce determination came to the fore, and for its time, preparation that boasted clever innovation.

Most athletics fans associate the champion race walker with boiling pots and steaming kettles crammed into his mother’s tiny bathroom in Cranford not far from Heathrow Airport that allowed him to replicate the expected sapping heat of Rome.

Thompson had already been burned, and that is exactly the word, four years earlier when he keeled over in fifth place at the Melbourne Olympics with only five kilometres to go.

As he sank to the scorching tarmac, it was as he put it: “like the road had turned itself into a wall".

A wiser man, he put in half-hour walking-on-the-spot shifts in the Cranford bathroom where he got temperatures up to 49C before starting to get heady.

At first, Thompson thought it was just the steamy conditions, but much later realised it was the effects of carbon monoxide poisoning from the paraffin in the heaters.

If it all sounds a bit mildly eccentric, no one else thought of it. 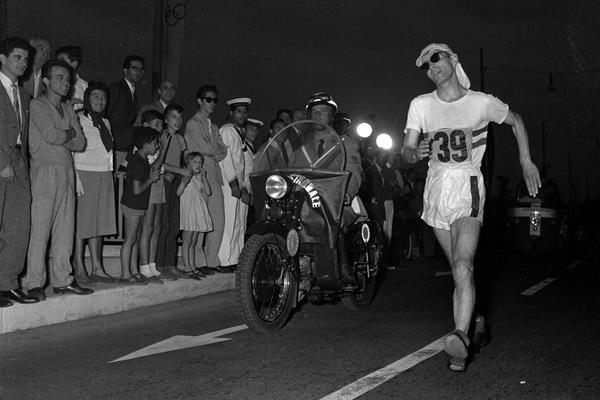 Teammate Eric Hall, who finished 10th in the 20km race walk in Rome, reckons he would have done the same had it crossed his mind.

“There were many who laughed at Don’s preparations, but for 1960 it was brainwave, especially for everyone who lived in climates like ours (Britain),” explained Hall.

“In the end Don admitted it wasn’t so much the bathroom heat, but the confidence he took from it. It gave him an edge if you like.”

Even Thompson’s hat was well thought out. His mother had sewn a white handkerchief to the back of a cap that gave it the look of a Foreign Legion kepi. The hope was the sun would be kept off his neck, and when dowsed with cold water, would refresh flagging spirits. He knew the stitches in the first cap might not withstand a drenched cloth dragging on the cap itself. “I asked her to sew it again, doubling the stitches and making it stronger,” he said.

Thompson then had a week of uninterrupted training in the Lake District where he fine-tuned his training and focused on opponents. At the time it was something of a luxury. He claimed he reserved energy when the team finally arrived in Rome by lying on his bed or lounging in a deck chair.

Hall begs to differ. "He was always on the move, walking around our room or wherever. It used to drive some of us nuts. Don always had so much energy.”

The race walkers streamed out of stadium on that September 7 afternoon, some ‘showing off’ and waving to friends, as Thompson put it. In contrast, his steady start saw him among the last to leave the Stadio Olimpico, just as in Berlin, Harold Whitlock had done for 24 years earlier.

The result was to be the same.

By 20km Thompson had moved up to fifth place, and five kilometres later was in the lead.

Two Australians, Noel Freeman and Ron Crawford, were disqualified, and the other two, India’s Zora Singh and one of three Soviets, wilted dramatically in the heat. 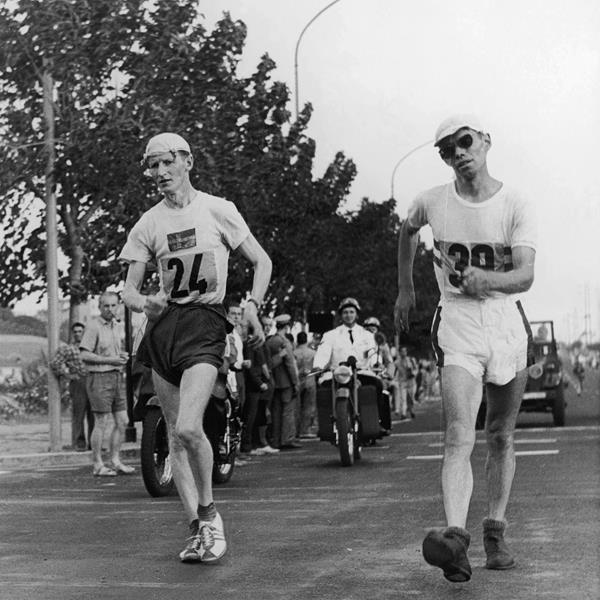 But if Thompson fancied an easy ride for the rest of the race, he was quickly disavowed when 1948 Olympic champion John Ljunggren came alongside. The Swede, two days shy of his 41st birthday, refused to be shaken off, and for the next 20 kilometres the pair were inseparable. However, it was clear by 45km Ljunggren was flagging.

In 1960, race walkers stopped at tables to take on board supplemented drinks, water and sponges; a scene far removed from today’s practitioners who grab everything on the move. Thompson noticed Ljunggren was taking longer at the feed stations, and it gave the Brit the final impetus to inch ahead.

The gap had become a few seconds at 47 kilometres, and then a few more a kilometre later. As they approached the stadium it had grown to 17 seconds. But Thompson knew Ljunggren was close behind, especially after he heard a second roar very soon after he entered the track. 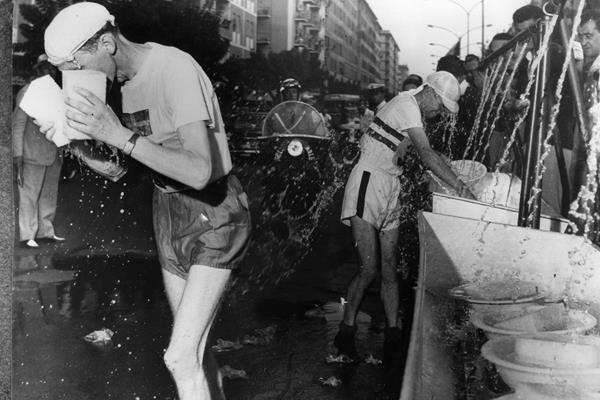 “It seemed as if he was maybe 10 seconds behind, and that made me work all the harder," Thompson explained. “That last 100 metres was a mixture of fear I would be caught, and adrenalin knowing the win was so close”.

As he crossed the line in an Olympic record 4:25:30 and with uncharacteristic arms aloft, he walked off as if he had a bus to catch rather than celebrate a fabulous victory. And that would have been that for a host of athletics greats.

Thompson had other ideas.

He earned bronze at the 1962 European Championships; made a third Olympic appearance in Tokyo in 1964, where he finished 10th, and just kept going and going.

By the time he became Britain’s oldest athletics international aged 58 years, 89 days at a 200km event in France in 1991, he was on his way to completing exactly 151 marathons and 151 half marathons, the last in 2004, at the age of 71 two years before his untimely death.

He also reached triple figures for 10km and 10-mile races.

“I suppose I’m obsessive,” he said, “But occasionally, when I am training or racing, I have an incredible feeling, a tingling in my scalp, as if my head is about to take off. It’s pure exhilaration, like hearing the Brandenburg Concertos for the first time.”

The best example of his single-mindedness was after a fall that broke his collarbone towards the end of the Thanet Marathon in 1983. Despite the pain, he was determined as ever to train the following day. But he couldn’t reach down to tie his shoelaces, so wife Maggie did it for him before they went to bed.

And that’s how he slept, in his running shoes before he got up at 4am as he did throughout his athletics career.

“Nobody needs you at that hour – your time’s your own,” he explained. “I’ve never wanted to cause any fuss or… aggro,” he added, searching for a popular word of the day to underline an undemonstrative manner.

There’s no doubt Thompson would have kept going into his ninth decade but fate decreed otherwise when he died in 2006 from a brain aneurysm.

It rather helped his legacy to be one of only two British gold medallists in Rome; the other was swimmer Anita Lonsbrough. As a result, ‘Il Topolino' – Mighty Mouse – as the Italians dubbed Thompson, ended up in Madame Tussaud’s for a while, or at least his waxwork did.

“The face looked nothing like me,” he sighed. “Sartorially or athletically, I never had much sense of style. But in 1960 the British public wanted gold medals and didn’t care too much where they came from, so I suppose I became a bit of an overnight celebrity.”

It was typically self-deprecating, mirrored by his meticulously kept diaries that devoted just one line to each day.

Except for that glorious September 7 day in 1960. That night Thompson allowed himself the luxury of two.