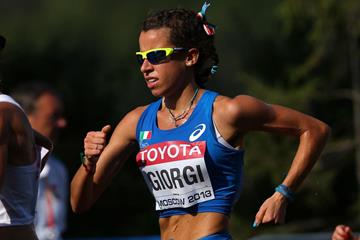 It has been 12 years since an Italian woman won a senior medal at the IAAF World Race Walking Cup, but young talent Eleonora Giorgi could be the athlete to end that drought.

The 24-year-old grabbed the headlines last month at the Memorial Mario Albisetti in Lugano when she smashed her personal best by more than two minutes, winning in 1:27:29 to become the third-fastest Italian race walker in history and the second-fastest woman in the world this year.

The only Italian women to have clocked faster times over the 20km distance are 1996 Olympic silver medallist Elisabetta Perrone and 2008 Olympic bronze medallist Elisa Rigaudo.

“In Lugano I planned to change my tactic and walk in the front,” said Giorgi after finishing just four seconds behind three-time World Championships medallist Liu Hong, who clocked a world-leading 1:27:25. “Staying in the leading group is totally different to the come-from-behind races I was used to do in the past. Walking with the leaders gave me a great feeling and I could feel the support from the fans during the race.

“I feel proud to be named in the same sentence as Italian walkers like Perrone, [Erica] Alfridi and Rigaudo,” added Giorgi. “Taicang will be my main goal of the year. I hope to improve my best time and come close to the Italian record held by Betty Perrone. The Lugano performance makes me dream about the World Cup but I am aware that I have a lot of work to do because my discipline is highly competitive.”

Giorgi dedicated her personal best in Lugano to Alfridi, the last Italian race walker to win the World Cup when the event was held on home soil in Turin in October 2002. “I have a very good relationship with Alfridi who was also coached by [1995 world silver medallist Giovanni] Perricelli in the last years of her career. She is a very good friend and always gives me a lot of advice.”

Latest in a long line of Italian race walking talents

Giorgi’s breakthrough performance wasn’t entirely unexpected after a brilliant winter season in which she broke a long-standing Italian indoor 3000m record with a world-leading 11:50:08 at the Italian Indoor Championships in Ancona, taking more than three seconds off the mark set 12 years ago by 1993 world silver medallist Ileana Salvador.

“I could not believe that I managed to improve a long-standing best time by Ileana Salvador, a legend of Italian athletics,” said Giorgi. “It was thrilling to walk faster than Erica Alfridi, Betty Perrone and Anna Rita Sidoti who dominated on the world stage for many years.

“But what surprises me most is that I did not prepare for that race and I did not plan this record. My goal was just to dip under 12 minutes but I became aware of the record after each lap when I heard my coach Gianni Perricelli in the stands giving me the split times. I realised in the final 500m that I could break the record. The 3000m is like a sprint for me, but the speed helps me to walk faster in the 20km.”

Perricelli was the first to congratulate Giorgi on the achievement. “I remember the Italian record set by Salvador 22 years ago in Genoa as I attended that edition of the European Indoor Championships,” he said. “I felt emotional when Eleonora managed to break the record held by an athlete who won many International medals.

“The big results achieved this year are due to a more intense work load in training and to less time recovery. Hard work is bearing its fruits this year,” added Perricelli. “We are happy with the result in Lugano but we are aware that there is a lot of work to do. We will work to improve the movement of her shoulders and arms. We will continue in this direction before Taicang.”

Progression from runner to race walker

Giorgi, who was born in Milan and grew up in Cabiate near Como, started her athletics career in 2004 as a middle-distance runner but she switched to race walking events in 2007 after an injury.

“Running was my first love,” she said. “I started running in cross-country competitions at school. I began walking in 2007 after a tendon injury which prevented me from running.”

She soon showed promising results as a race walker under the guidance of her first coach Vittorio Zeni competing for the local athletics club Atletica Lecco Colombo Costruzioni. She finished 18th in the 10km at the 2008 World Junior Championships in Bydszgosz. She then finished 11th at the 2009 European Under-23 Championships and fifth at the 2011 edition.

But she started to make significant progress in 2010 when she began training under the guidance of Perricelli. Her boyfriend Matteo Giupponi, the 2007 European junior silver medallist and 2009 European under-23 bronze medallist, also trains in the same group.

“I personally asked Perricelli to train me when I joined the Fiamme Azzurre military team in 2010,” she said. “I knew Gianni was a great athlete and a great coach. We have a good relationship based on trust.”

Her breakthrough season was 2012 when she achieved the Olympic qualifying standard, first at the IAAF Race Walking Challenge meeting in La Coruna and then again at the World Race Walking Cup in Saransk with 1:32:57. She went on to finish 14th at the Olympic Games in London at the age of 22, setting a personal best of 1:29:48.

“The London Olympics was my best competition ever as it was my first big international race against the best walkers in the world,” said Giorgi. “I watched many of them before, but only on television. I didn’t feel tired during the race and the crowd cheered on all the athletes, regardless of their nationality.”

One year later she won the 20km at Mediterranean Games in Mersin before finishing 10th at the IAAF World Championships in Moscow in a race where compatriot Elisa Rigaudo finished fifth.

“I started training for this season last November and I prepared for 20 days in San Diego (California) last January in a place where Perricelli trained 22 years ago,” she says.

She has been balancing her training with her studies in economics at the prestigious Bocconi University in Milan. “I am finishing my exams and I am planning to get the specialist degree in economics of public administration and international institutions before the end of the year,” said Giorgi. “It’s not easy to combine high-level sport with the demands of university studies but I manage to organise my time to do both successfully.”

“My race in Zurich is scheduled on 14 August. Fourteen is my favourite number as I was born on 14 September 1989 and I finished 14th at the Olympic Games in London.”