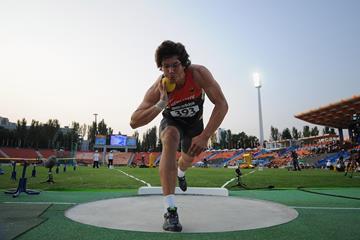 Patrick Muller made a little bit of IAAF World Youth Championships history when the German shot putter became the first gold medallist of the 2013 edition and he did it in some style with a winning distance of 22.02m, the second-best performance in the history of the championships.

With his mother Ines, the 1987 IAAF World Championships Shot Put bronze medallist, watching proudly from the stands, the bespectacled German teenager rose to the occasion and pulled out his personal best and winning throw with his first effort.

“This is an incredible feeling, with my best friend (silver medallist Henning Prufer) standing up there on the podium and hearing the national anthem. This is what you train so hard for,” said a delighted Muller.

“First and second place, for me and Henning, we did not dream this before we came here. We joked: ‘I’ll be first, you can be second’ But we didn’t really expect to be! However, I have to confess, a few hours before the final, we did practice the words of the national anthem in our hotel room.

“After reaching 21.25m in the morning session to lead the qualification, I knew I was in great form I felt a personal best was possible in the final (his previous best was 21.92m) and I knew that I could be in contention for a medal but I certainly didn’t dare to give myself the gold medal.

“Remember I wasn’t even the world leader coming here, that was Poland’s Konrad Bukowiecki (who had a below-par competition and finished fifth), he had problems in this competition but I had been following his competitions on the internet and knew what he might be capable of. I knew Henning could cause a shock as well and there were the others.”

Muller couldn’t let his concentration slip as Prufer unleashed a personal best of 21.94m with the very first attempt of the competition. Briefly, Prufer had also snatched away the German youth record from Muller and with six boys over 20 metres, the contest finished as the highest-quality competition for depth ever seen at the World Youth Championships.

“I had seen in the morning qualification that Henning was in super form. I knew that he may challenge me. I had adjusted to it. My coach (Gerald Bergmann) told me immediately after his surprise effort, ‘Now let's see what you've got,’ that motivated me and I responded well, which made me very happy.”

Inevitably any young German shot putter will be compared to the current World champion David Storl, one of only 10 athletes to win at youth, junior and senior World Championships.

In fact, Storl is the only other German boy to win the Shot Put at the IAAF World Youth Championships, a feat he achieved in 2007.

“I think that this says a lot for the state of German athletes, two gold medals in four editions of the championships.

"Storl is definitely a role model for me. He's a great guy; he's a great putter, very focused. We also have a similar technique. We draw our strength from the quickness of our feet. I will of course try to follow in his footsteps. I have already beaten his German youth record and I will try to out-do his next feat, his junior record as well.

“We do train together sometimes. However, he hasn’t been the biggest influence on me out of the famous German throwers. I have to say thank you also to Robert Harting, he has always been encouraging me, inspiring me, and giving me advice on how to handle competitions. I am regularly in contact with him."

Muller now has a few competitions left this summer and his goal now is to improve his personal best even further.

“It was great that I could respond in a big competition and throw well when important medals were at stake but after my first round throw, the adrenaline was going through my body. I was throwing a little crazy. I got some good distances with some of my other throws but I was getting a little too carried away.

“Fortunately, I think that was happening to Henning as well, neither of us improved after the first round. In the end, the fact that I was not as disciplined as I should have been didn’t matter, but I will learn from this experience as well,” reflected Muller.