For the past three years, Jairus Birech has been a mainstay on the IAAF Diamond League circuit but a coveted spot on the Kenyan team for the global championships has largely eluded him; for now, at least.

Back in 2012, the 21-year-old from Eldoret ran an eye-catching time of 8:03.43 as a teenager but only finished the year ranked fifth domestically. He would have been a shoo-in for a spot on the team for the London Olympics in any other country but he insists the rivalry among Kenyan steeplechasers – despite being fiercely competitive on the track – is not an ill-tempered one.

“No, no, no. Not at all. It’s a friendly rivalry,” smiled the easy-going, softly-spoken Birech in the week leading up to the World Athletics Gala in Monaco where he was acting as an ambassador for Nairobi’s bid for the 2017 IAAF World Youth Championships.

Birech dominated the commercial circuit in 2014, winning nine of his 12 races at his specialist distance including the African Championships and IAAF Continental Cup in Marrakech. He was among the initial list of 10 candidates for the 2014 World Athlete of the Year award but despite missing out on the cut, Birech uses this as fuel for the season ahead.

Birech fondly recalls the last time Kenya staged a global athletics championship in 2007 and he believes athletes and spectators alike will respond positively when the athletics world diverges on the Kenyan capital in three years’ time.

“I remember watching the World Cross Country Championships in Mombasa and that really inspired me,” said Birech, who was 14 at the time. “Sadly I was too young to compete in it but I enjoyed watching the event.”

“In Kenya we love sports and we love running so we will root for the athletes.”

Birech – like so many other great athletes – served his apprenticeship in the junior ranks before making the step up into senior competition.

After winning silver at the 2011 African Junior Championships, Birech quickly became accustomed to the hurly-burly of the international scene and with four seasons of overseas competition under his belt, he starts as one of the early front-runners for the title at the 2015 IAAF World Championships in Beijing.

If Birech does claim the top prize next year, he won’t be the first from the family to win a global title and some of the kudos would have to go to his older cousin Alfred Kirwa Yego – the 2007 world 800m champion – who played a guiding role in Birech’s formative years.

“Alfred was the one who brought me up and encouraged me to run. We still regularly keep in contact as well,” said Birech, who describes Yego as his ‘mentor’.

Having placed fourth at the 2012 and 2013 Kenyan Trials, Birech is acutely aware that a place on the team is by no means a given and is palpably cautious about looking too far beyond the notoriously competitive trials where “everyone wants to make the team”.

But if his 2014 form is anything to go by, Birech must be confident of breaking this duck and joining his childhood hero – and reigning world champion – Ezekiel Kemboi on the team for Beijing.

“I was watching him as a kid,” recalls Birech of Kemboi, who made his first Kenyan senior team when Birech was a mere nine years old. “When we were still kids and growing up, we used to sit and watch him. I was his fan so I was happy to race him in the Diamond League for the first time in 2011.”

From being an idol to a rival on the track, the measured and circumspect Birech also trains in the same group as the ebullient Kemboi, along with fellow steeplechasers Brimin Kipruto, Benjamin Kiplagat and Tareq Mubarak Taher, and recent Chicago Marathon winner Eliud Kipchoge, with whom Birech sometimes does his long runs.

Being part of this highly competitive training environment propelled Birech to the top of the 2014 world list when he became the second-youngest athlete in history to break the eight-minute barrier with a world-leading 7:58.41 at the final stop of the IAAF Diamond League circuit in Brussels.

Having cracked this barrier and moved into the world all-time top 10, Birech is now turning his attention to challenging Saif Saaeed Shaheen's long-standing world record of 7:53.63.

“I would like to try to attempt the world record next year,” said Birech, who feels there is still room for improvement.

"One of my problems is the barriers; I need to get quicker over them. We don’t really have any qualified coaches for it,” added Birech who, at 21, still has plenty of time to sharpen his technique.

For the time being, Birech will gauge his endurance in a series of scheduled cross-country races in Europe in the upcoming weeks before turning his attention back to the steeplechase in the summer where a potential record attempt could be on the cards.

When prompted to name the best Kenyan steeplechaser of all-time, it was not surprising that Birech cited Kemboi, who is still going strong at 32.

But looking ahead to the rest of the decade, Birech is among a new generation of steeplechasers who will proudly don the Kenyan vest at the major championships and challenge for the major honours.

And maybe, in another 10 years’ time, another young and budding steeplechaser from Kenya will refer to Birech as the greatest of all time.

BACK
Pages related to this articleAthletes
Jairus Kipchoge BIRECH 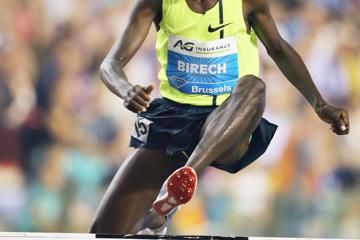