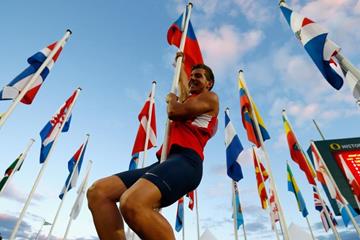 Before the start of the IAAF World Junior Championships, Oregon 2014, only two Czech athletes had won gold medals in the 28-year history of the competition.

But in just one day, Anezka Drahotova, with her world junior record in the 10000m race walk, and Jiri Sykora, with his championship record in the decathlon, completed a golden double on a historic Wednesday at Hayward Field for the central European nation.

Sykora totalled 8135 points to win the best decathlon ever contested at the World Junior Championships. In the process, he became the first Czech male athlete to win gold at the global event.

“It is the biggest victory in my life,” said a joyful Sykora. “I came here as a world leader, but I knew I would have two difficult days here and they were. In the last event I did all I could to win. I was so tired I was looking at the points. I learned I had won when everybody (the athletes) came to me to congratulate me. And I said, ‘really?’”

The 19-year-old had a close battle with Australia’s Cedric Dubler, who improved seven personal bests en route to an Oceania junior record with 8094 points.

“The decathlon was amazing, the top three scored 7900 points or more,” said Sykora before praising Dubler’s performance. “It was a surprise to me. I thought he would not score as high as he did. My coach told me to stay no more than 20 meters from him (in the 1500m). I was very tired on the last lap but I ran as fast as I could. These two days were really hard.”

Sykora traded the lead with Dubler on the two days of the decathlon. He initially took the lead in the shot put on the first day and regained it with a personal best of 48.55m in the discus.

After losing it to the Australian in the pole vault, he moved to the pole position thanks to a 60.56m personal best in the javelin.

“The hurdles and the javelin were my best events,” he said. “The high jump was really bad. I lost about 70 points. Everything else was normal. It is a good track. Competing in the infield felt like my training venue. The crowd was really amazing. It was really perfect.”

Despite the nine-hour time difference between Eugene and the Czech Republic, Sykora felt the support of his family and two of his idols: former world record-holder Roman Sebrle and three-time world champion Thomas Dvorak.

“They texted me to encourage me and congratulate me on my gold medal,” he said. “I am really satisfied about it.”

He is aware of his historic gold, the first one for a male Czech athlete at the World Junior Championships. “It is amazing but I think it will be more amazing if I can do what they (Sebrle and Dvorak) did,” he said. “European, world titles, world record, 9000 points; it is my dream.”

Sykora understands what that entails: “A lot of hard work. For the junior championships, I did not train that hard, five times a week. It will be more demanding when I am a senior next year.”

The young Czech’s performance came on the same track where USA’s Ashton Eaton broke the decathlon world record with 9039 in 2012.

“I hope I will be able to compete with him and the world's best athletes soon, maybe at the World Championships next year,” he said.

But before he steps foot on the track in Zurich, he wants to enjoy the rest of his stay on his first trip to the United States.

“I want to see all the Czechs competing here,” he said. “And then we will rent a Mustang and drive around.”