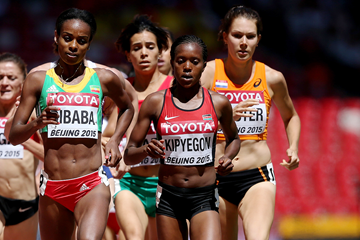 After stunning win in Shanghai, Kipyegon aims to challenge Dibaba

When one athlete has six seconds over the field at 1500m and wins the world title, blowing the race open with a 57-second third lap, it is tempting to see the destination of the Olympic gold medal as pretty much a foregone conclusion.

After all, that is the sort of superiority legendary miler Herb Elliott had over his opposition back at the 1960 Rome Olympics, and those of a certain age know how that worked out. (Younger ones can look it up: suffice to say, Elliott won, in rather spectacular fashion.)

Genzebe Dibaba has that sort of edge in time over those who would challenge her for the 1500m title in Rio this August.

She ran a world record of 3:50.07 at the IAAF Diamond League meeting in Monaco last year. Of those likely to run against her in Rio, only three have broken 3:57, two of them in finishing way behind her in that world record race.

But of that sub-3:57 trio, Kenya’s Faith Kipyegon ran her best of 3:56.82 in winning at the IAAF Diamond League meeting in Shanghai on Saturday.

Not only that, but after leading for the previous 400 metres, she kicked away impressively from her compatriot Hellen Obiri – herself a 3:57.05 performer – and Ethiopia’s Dawit Seyaum.

Already in a winning position, Kipyegon pulled away further from the other two to win by about 20 metres.

Granted, it is a long way from there to challenging Dibaba, but there are other favourable indications for the Kenyan runner as she contemplates the task ahead of her, and others.

Firstly, she has a decent career record against Dibaba over 1500m. They have met five times, with the Ethiopian just enjoying a 3-2 edge. Against that, two of Dibaba’s three ‘wins’ over Kipyegon have been winning performances; both times Kipyegon has finished in front, neither won the race.

One of Dibaba’s wins was the 2015 World Championships final in which Kipyegon and Sifan Hassan of the Netherlands picked up the minor medals. Interestingly, the detailed race analysis shows that both Kipyegon (56.97) and Hassan (56.63) actually ran faster than Dibaba on that third lap.

This no doubt largely indicates the race situation. Kipyegon and Hassan were chasing frantically to prevent the stable door being shut firmly on them after Dibaba had bolted.

But it also shows that the appearance of impressive closing speed for Kipyegon on Saturday night was no illusion and that neither she, nor Hassan, should fear getting blown away by Dibaba.

Kipyegon also shares something else with Dibaba: a competitive background in cross-country running.

Indeed, there may be another favourable omen for Kipyegon in their World Cross Country Championships records as juniors.

At the 2010 edition in Bydgoszcz, she was one of the Kenyan team which swept the first four places, denying Ethiopia a third straight team win and Dibaba, who finished 11th, a third straight individual title.

Kipyegon may well have had an individual medal then but for the fact she ran barefoot on a slippery course. In firmer conditions, in the Spanish town of Punta Umbria the following year, the lack of shoes was no handicap as she won emphatically, but she was wearing spikes when she returned to Bydgoszcz two years later to win her second junior title.

All of which means very little to any one specific race, of course.

Given their head-to-head records at 1500m and cross country, however, Kipyegon has little reason to fear Dibaba unduly and, if they are on level terms on the final lap, may even have a slight edge in closing speed.

The other big reservation about reading too much into the Shanghai result is that a number of likely Rio contenders were not there or, like Jenny Simpson who was, are some way from top form this early in the year.

Hassan withdrew the week before the Shanghai race, and ran 3:56.09 behind Dibaba in Monaco last year when USA’s Shannon Rowbury ran 3:56.29 for third place. Simpson will undoubtedly improve while Obiri, Seyaum and Besu Sado could all improve on their runs behind Kipyegon.

While conceding the considerable time advantage Dibaba enjoys on everyone else at the moment – an advantage she may yet consolidate with coming attempts on the 1500m and mile world records – Kipyegon’s performance in Shanghai at least warns her, and us, that the result of the 1500m in Rio is anything but a foregone conclusion.