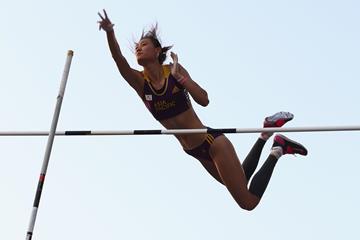 Starting to train as a pole vaulter at the age of 12, Li Ling needed another 12 years to become the best female vaulter in China and, indeed, Asia.

“There were a few twists and turns in my career but I was just simply a slow starter,” said Li, who is now 25. "I started to train in pole vault at 12 and it took me nearly four years before I could actually clear a bar."

With her father being a basketball player and her mother a volleyball player, Li inherited a talent for sports from her parents but had little interest in ball games.

“Basketball or volleyball is not my thing," she added. "I just like the feeling of jumping high and pole vault is the best sport that meets my interest.

“I grew to 1.80 metres when I was only 12, but maybe I grew too fast as I was so skinny by then that my (lack of) strength became my weak point. When I began to train in the pole vault, I found it difficult to run fast holding the pole, let alone bend it.

“So I needed to not only learn the techniques but also work on my strength," she added. "Looking back at those four years of groundwork, I think being a slow starter is not a bad thing since it gave me more time to polish the essential techniques."

After years of waiting and preparation, Li finally tasted the feeling of flying over a bar in 2005, just before her 16th birthday.

However, her first competition was not a good start either.

“I remember my first competition was an indoor event in Shanghai. I finished at 3.60m, clearing that height. After the competition I cried, because some of my opponents just started at 3.80m, their competition was yet to begin when I was already out. That was too embarrassing.”

In her second serious competition, this time in Beijing, Li avoided such blushes and disappointment as she cleared 3.90m.

And her progress has hardly stopped since.

In 2006 she won her first national title at the Chinese National Junior Championships with a personal best of 4.15m, earning a trip to the IAAF World Junior Championships that summer on home soil in Beijing, where she qualified for the final but then failed to clear a height.

One year later, she improved to 4.30m at the National Grand Prix meeting in Suzhou.

In February 2008, Li cleared 4.45m at the National Indoor Championships to earn a ticket for to the 2008 Olympic Games.

“The Beijing Olympics was my first time to compete in major international events," said Li. "I was very, very nervous and only finished at 4.15m."

Now 1.85m, Li has now competed at two Olympic Games and three IAAF World Championships but has only once managed to make it into the final.

But her fortunes at big global competitions changed in 2013. Although she finished 11th with 4.45m in Moscow two years ago, her qualifying mark of 4.55m in the Russian capital was a personal best for Li and helped to boost her confidence considerably.

One month later, in September 2013, she set an Asian record of 4.65m at the Chinese National Games in Shenyang.

Last year witnessed another big breakthrough for Li as she leapt 4.55m to win at the IAAF Continental Cup in Marrakech, Morocco, which was the first international title achieved by Li. It was also the only victory for the Asia-Pacific team at that competition.

She went on to fulfil her role as favourite by taking the Asian Games title in Inchon, Korea, two weeks later.

“After years of international competition experiences, I have learnt to overcome the stage fright and control myself in competitions," she said. "I think it is a sign of maturity.

“My coach never requires me to progress at a high speed. He just wants me to take one step at a time and try to compete to my best level in each event.”

This year has already started well for Li.

She cleared 4.50m to equal her own Asian indoor record on 1 March in Shanghai and went on to improve it to 4.51m one week later in Nanjing.

Although she is keen to atone for the disappointments of her teenage years on the global stage in the Chinese capital, she also remains cautious.

“I do not want to set a goal for the Beijing World Championships. I just want to stay healthy and give it my best try,” said Li. “I hope Chinese pole vaulters can reach the world level because I really love this sport.

“It is not simply running or jumping. It is a very sophisticated and interesting event. I never feel bored in the pole vault,” she added. “When you take off you can feel the elasticity of the pole that ejects you. You cross the bar, falling down while seeing it stay up there; that feeling is so amazing.”