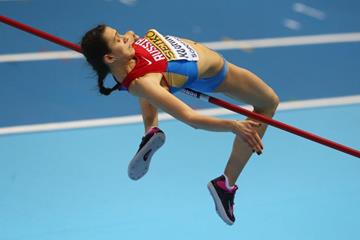 The 21-year-old Russian high jumper Mariya Kuchina has been among the rising stars of the sport, metaphorically and literally, for several years.

However, her real breakthrough came this winter, when Kuchina first cleared 2.00m - a height she scaled in three of her five competitions in an eight-week period from January to March with a best of 2.01m coming at the IAAF Indoor Permit meeting in Stockholm - and then shared the first place at the IAAF World Indoor Championships in Sopot.

Now, after more than two months out of action, the world awaits to see what she can produce on her 2014 outdoor debut at the IAAF Diamond League meeting in Eugene on Saturday (31), the famed Prefontaine Classic.

“She has got golden character,” said Kuchina’s coach Gennagy Gabrilyan, and he really means it.

Despite popular belief that star athletes have to be utterly self-centred in competition, both in and out of the sector Kuchina has a reputation of staying modest and calm. Some Russian pundits say that this is even more unusual considering the fact she comes from Kabardino-Balkariya, the Caucasus region famous for its high emotions and expressive behaviour.

Nevertheless, she admits that sometimes her calm façade can crack and one time when it did was actually in Sopot, when she agreed not to participate in a jump-off and share the gold with local jumper Kamila Licwinko.

“I now really regret that decision and it was just made by mistake," confirmed Kuchina. “I went to the World Indoors as the season leader and wanted only the first place.

“Unfortunately my coach could not go with me because of a passport issue. There was nobody to help me from the stands, and so I mixed up the attempts and somehow decided that I was second,” she added.

“I was so upset that when Kamila together with the judge came up and asked me if I wanted a jump-off, at first I could not believe my ears. In a different emotional state, I would of course have jumped for the gold, but at that moment I felt so very tired and empty.”

Obviously, in the wake of Sopot, there will be no chance of her following in the footsteps of her Russian compatriots Svetlana Shkolina and Anna Chicherova, who agreed on a rare IAAF Diamond League draw in Rome last year, which saw both women take four Diamond Race points.

Kuchina’s story in the sport started, as it often happens, from a happy coincidence.

She met her first, and current coach again, at the age of seven.

At the time he was a junior school teacher rather than a high jump coach but Gennady Gabrilyan quickly noticed that Kuchina was different to her fellow classmates.

Extremely thin and flexible, fast, strong and good at various games, she tried almost all of athletics’ disciplines, including javelin and shot put, before she found her vocation in the high jump.

Gabrilyan stayed close at hand for the next 10 years, including when she took the silver medal at the 2009 IAAF World Youth Championships and the gold medal at the 2010 Youth Olympic Games.

On the Russian team’s return from Singapore, it was the erudite and intelligent Kuchina who had to make speeches at all the official meetings, including at the president’s reception. It was much harder than jumping, as Mariya mentioned, but she managed to stand the pressure.

Later in 2010, after such experiences, Gabrilyan considered that it was the right moment for him to let go and for Kuchina to go her own way.

At 17, Kuchina went to university in Volgograd and joined the renowned group of Boris Gorkov, the former coach of 2004 Olympic champion Yelena Slesarenko.

However, despite winning the 2011 European junior title and jumping a world junior indoor record of 1.97m in early 2011, Kuchina wasn’t comfortable with Gorkov as her mentor and in 2012 she returned to be coached by Gabrilyan again, who by now had left teaching to become a professional coach.

“Even at 17, she could understand the difference between just fame and real human relationships," said Gabrilyan. "Among her friends back home, she would never show that she is kind of more successful than they are. And she immediately forgot about all her medals as soon as we started training."

They – both Kuchina and Gabrilyan – don’t like to talk about the reasons why it did not work out with Gorkov, but it is noticeable that in the summer of 2012 her results had stagnated and she didn’t make the Olympic team.

The frustrations didn’t end there. She took second place at the World University Games on home soil in Kazan, and her equal fourth-place finish at the Russian Championships two weeks later meant that she was not included in Russia’s World Championships team.

“The fact that I did not qualify for the home Worlds, despite winning the European Team Championships title that spring, made me really upset,” commented Kuchina.

“I could not make myself watch the Moscow Champs on TV. In the end, I watched only the women’s high jump. During all other competitions, I preferred to go training myself."

“She has been ready for a two-metre jump for several years already, but all the time something stopped her," added Gabrilyan, with a smile.

So, was it a special day for her when she first cleared two metres, a height which came in Chelyabinsk on 16 January?

“I was very happy of course, but it did not feel like the highest point in my career,” said Kuchina.

Kuchina, of course, realises how hard it will be make any national team thanks to the presence of Olympic champion Chicherova and world champion Shkolina, neither of whom look like hanging up their spikes anytime soon.

However, she just tries to put such things out of her mind and tries to relax mentally and let things go.

“I am reading now The Little Prince by Saint-Exupery,” revealed Kuchina about one of her hobbies.

Rather appropriately, the central figure is a small boy who can fly high, which indeed is good reading for a young high jumper.