The heights continue to soar, yet the process stays the same. When Mondo Duplantis stands at the end of a pole vault runway, staring up at a bar that seems pitched in the sky, halfway to heaven, he boils a task of ultimate sophistication down to sheer simplicity.

Whether he’s entering at a routine height of 5.50m, or looking up at a bar no one in history has cleared, it’s the same routine – although the latter brings about a unique burden.

“I know the magnitude of it in the situation, that it’s got to be a pretty perfect jump to get over it,” he says. “But I just sit there for a second, try to visualise what I have to do to get a clearance.”

On Saturday, the 21-year-old was crowned Male Athlete of the Year after turning a ferociously difficult season into something utterly flawless: 16 competitions, 16 wins (17 if we count the Ultimate Garden Clash); two pole vault world records; and the highest outdoor vault in history.

“It’s got to be the first world record,” he says, referring to the 6.17m he cleared in Torun in February to break Renaud Lavillenie’s mark, which he broke again a week later, clearing 6.18m in Glasgow. “That’s changed so much for me.”

For a child prodigy who redefined the limits of his event as he rose through the ranks, many saw the world record as his destiny, as did Duplantis. But when it arrived, it felt a little surreal.

Good thing, too, because if anyone seems capable of rewriting his mark in the years to come, it’s Duplantis himself.

In many ways, 2020 brought his story full circle, wrapping the first chapter of his career up in a neat little bow. It was a year in which Duplantis had to revert back to his original training facility: a pole vault runway in the backyard of his family home in Lafayette, USA.

“We didn’t have much of an option other than coming back to my parent’s house and jumping in the backyard,” he says. “I found it cool, kind of sentimental. I hadn’t jumped here since 2015.”

His father Greg had been a world-class vaulter for the United States with a personal best of 5.80m, while his mother Helena – a native of Sweden – was a heptathlete and volleyball player. Duplantis chose early in his career to represent Sweden, a bigger decision than most have to make in their mid-teens as sporting stardom, by then, seemed more probable than possible.

Having learned to vault as a child using a broomstick in his living room, Mondo cleared age group world bests every year between the ages of seven and 12, all of which still stand. In 2015 he was just 16 when he cleared 5.30m to win the world U18 title in Cali, Colombia, and three years later Duplantis truly came of age, clearing a world U20 record of 6.05m to win the European title and beat his idol: Renaud Lavillenie. 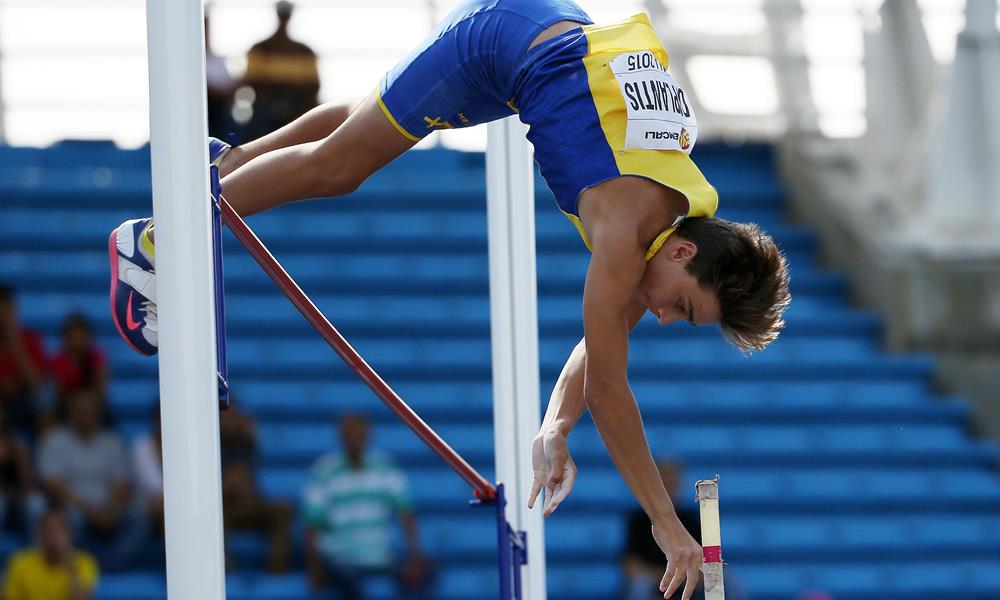 “Just growing up, as a younger kid, I always looked up to Renaud and wanted to accomplish what he accomplished,” he says.

During the height of the pandemic, they squared off again from afar, Lavillenie and Duplantis joining Sam Kendricks for the Ultimate Garden Clash. Duplantis and Lavillenie cleared five metres 36 times in a 30-minute period to share the win, the only time this year anyone has been on par with the Swede.

“We had pretty much nothing else to do,” admits Duplantis. “We thought it’d be a really fun thing, a cool thing for people to watch because there was pretty much no live sports at the time.”

By the time of that event in May, both the Olympics and European Championships had been wiped off this year’s calendar, and given his form it’s only natural Duplantis would have loved for them to go ahead as planned.

“It’s a bummer it couldn’t happen this year but I’m not going to complain,” he says. “A lot of worse things happened to other people.”

Having already flown the nest from his family home, Duplantis found himself back there during the pandemic to continue his training, even if it wasn’t quite at the same level.

“I didn’t know what meets there were going to be so you don’t know what you’re aiming for, what your big goal is,” he says. “I took it as a relaxing period of an off-season. I spent time with my family.”

But competition is what has always sustained him, the light at the end of the training tunnel.

“I love competing so it’s hard for me to just train,” he admits. “It’s not that I don’t enjoy it, but it can get tough at times when the competitions are so far away.” 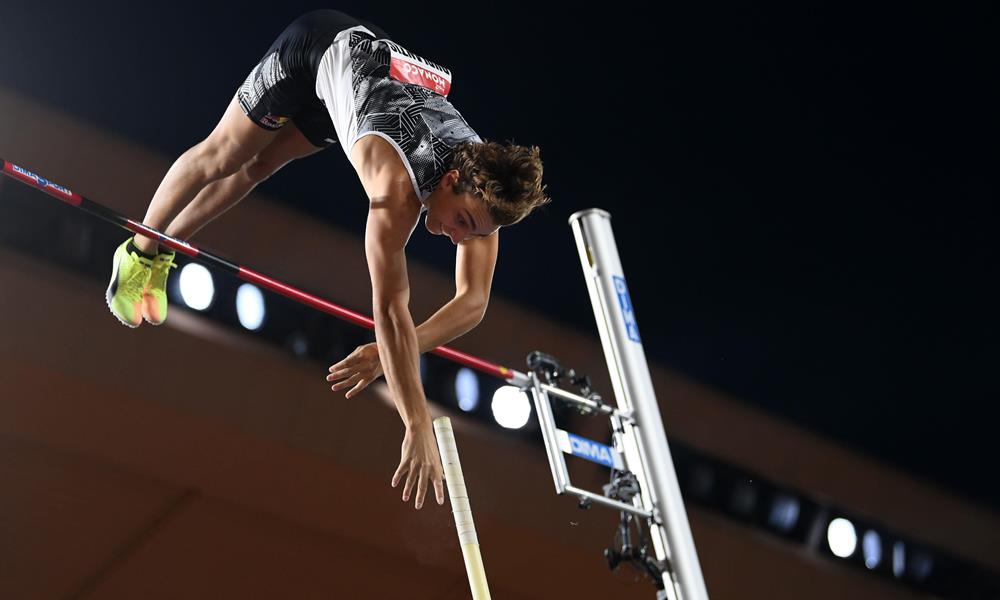 When events did resume, Duplantis was as dominant as ever, taking wins in Oslo, Gothenburg and Karlstad before soaring over 6.00m to win in Monaco. A 6.01m clearance soon followed in Stockholm, then 6.07m in Lausanne before Duplantis cleared 6.15m in Rome, the highest outdoor vault in history. His parents weren’t there that night, but Duplantis received technical feedback from rivals Lavillenie and Ben Broeders.

“I just had the good jump at the right time,” he says of the 6.15m clearance, again making the extraordinary seem almost routine. If there’s one thing that has defined his career so far, it’s that.

Greg Duplantis – who together with wife Helena won this year’s Coaching Achievement Award for their work with Mondo – once explained the difference between his son and other vaulters his age is that Mondo can use longer, stiffer poles designed for heavier vaulters. He told the New York Times that the catapult effect it created is like “a pea on a plastic spoon that’s shooting across a cafeteria”.

In his teens Mondo was shorter than many of his peers, but an adolescent growth spurt has him now standing above the majority of them. His speed and strength have also improved – the last time he raced the 100m, in April 2018, he clocked an impressive 10.57 (2.1m/s).

As the heights have risen, so too has the danger and the inherent thrill that first drew him to the event. Does he consider himself a daredevil?

“In a way, yeah, you have to have some bit of fearlessness to you,” he says. “There are some who are a little bit crazier. Renaud is a lot more of a daredevil. I don’t know if I’m an adrenaline junkie but I definitely enjoy the thrill of jumping.”

His achievements have fostered a visible confidence, but no trace of arrogance.

He’s aware that when he competes he represents not just himself, his family and his dual nationalities, but the event itself.

“What Sam (Kendricks) and Renaud (Lavillenie) did in 2017 and 2018 was really good for pole vault, having some really good competitions and achieving some really great heights. That set the tone for pole vaulting, and on the women’s side they were doing the same thing with Kat (Stefanidi) and Sandi (Morris). I just try to go out there, jump high, put on a show. I hope it comes off well and people think it’s cool.”

To be crowned Male World Athlete of the Year, Duplantis had to defeat Joshua Cheptegei, Karsten Warholm, Ryan Crouser and Johannes Vetter – all of whom had seasons worthy of victory – and he was suitably delighted with the accolade.

“I know what I can do when it comes to pole vaulting but when it comes to comparing yourself to the best shot putter or the best 10K runner, it’s pretty cool to see your name among it,” he says. “To come away with the win is quite an honour.”

The last vaulter to win was Lavillenie in 2014 and, at 21, Duplantis is the youngest ever winner, throwing up the question not so much whether he can still improve, but by how much?

A game no one is playing quite like him. 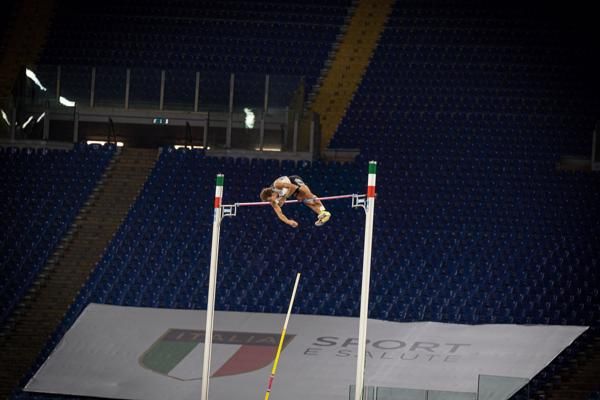 Still ‘up in the clouds’, Duplantis turns his...