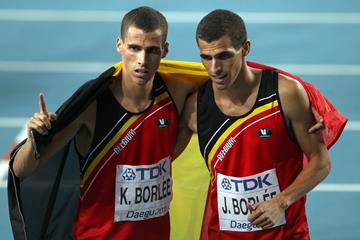 Moscow will be a family affair for Borlees and other siblings

The Borlee brothers are perhaps the most famous twins in athletics at the moment, and the 400m runners are set to make history at the IAAF World Championships in Moscow.

When Jonathan and Kevin Borlee line up for the 4x400m relay alongside younger sibling Dylan, it will be the first time in the history of the World Championships that three siblings have all competed together in the same race.

And although Jonathan broke his brother’s national record in the heats of last year’s Olympic Games with 44.43, it was Kevin who once again finished higher in the final as he placed fifth, one place ahead of Jonathan.

The Belgian twins – whose older sister Olivia won Olympic silver in 2008 and World bronze in 2007 in the 4x100m Relay – are expected to be among the medal challengers again; not only in the individual event, but in the 4x400m Relay too.

Belgium finished fourth at the 2009 World Championships and fifth two years ago in Daegu, just 0.31 away from a medal. Their chances will have been strengthened by the presence of Dylan, who recently took more than a second off his PB when finishing second at the National Championships with 45.80.

But the Borlees aren’t the only set of twins in Moscow; in fact, in the race-walking events along there are three sets!

Joao and Sergio Vieira will represent Portugal in the men’s 20km walk, Chile’s Edward and Yerko Araya will contest the 50km and 20km walks respectively, and Kazakh twins Ayman and Sholpan Kozhakhmetova will both compete in the women’s 20km walk.

Other twins in Moscow include Slovak jumpers Jana and Dana Veldakova; Jake and Zane Robertson, distance runners from New Zealand, and Algerian middle-distance runners Imed and Abdelmedjed Touil, who will compete in the 1500m and 3000m Steeplechase respectively.

Aside from twins, there are many other sets of siblings set to compete at the World Championships. Three reigning Olympic champions will be joined on their national teams by their younger siblings.

Olympic Pole Vault champion Renaud Lavillenie is on the French team alongside younger brother Valentin. Three-time Olympic gold medallist Tirunesh Dibaba will be cheering on younger sister Genzebe Dibaba in the 1500m, while World and Olympic Discus champion Robert Harting will have his younger brother Christoph for company on the German team.

Kenya’s Bethwell Birgen will be a medal contender in the men’s 1500m, while his brother Bernard Koech will have ambitions of a podium finish in the Marathon.

Luis Rivera, the current world leader in the Long Jump, will be one of Mexico’s best chances of a medal. He will be making his World Championships debut, but it will be the second World Championships appearance for his brother Edgar, who hopes to improve on his performance from two years ago in Daegu where he finished 26th in High Jump qualifying.

Unusually, sisters Mimi and Almensh Belete will both be in Moscow but representing different countries. The former Ethiopians have switched allegiance with Mimi now representing Bahrain and Belete running for Belgium.

There are also sprint hurdlers Shermaine and Danielle Williams from Jamaica and Thomas and Pascal Martinot-Lagarde from France. Meanwhile Olympic 400m silver medallist Christine Ohuruogu was named in the British 4x400m squad alongside younger sister Victoria.

Leif and Niklas Arrhenius will represent Sweden in the Shot and Discus respectively, while Eritrea’s Goitom and Yonas Kifle will feature in the 10,000m and Marathon.

Race walker Jared Tallent was selected for the Australian team along with sister Rachel. Also in the race walking events are Swiss duo Marie and Laura Polli. In fact, more than a third of the Swiss women’s athletics team is made up of siblings. Aurelie and Fanette Humair go in the 4x100m along with Lea Sprunger, whose sister Ellen will compete in the Heptathlon.