Through the early rounds she floated like something of a butterfly. Then, when it came to the final round, she stung like a bee. Ali was left standing with a world title.

In the women’s 60m hurdles final on day two of the IAAF World Indoor Championships, Nia Ali proved to be the greatest. Sally Pearson had gone into the race, and the whole competition, as one of the hottest of favourites in Sopot. But the Olympic champion from Australia’s Gold Coast found herself on the metaphorical canvas, courtesy of a new golden girl of the global hurdles game.

As it happens, Ali has had major barriers to overcome before. In 2009, while studying psychology and training for track at the University of Southern California in Los Angeles, her world was rocked by the news that her father had been killed in a murder-suicide back home in Philadelphia.

The shock and grief put her already promising career as a heptathlete (with a personal best of 5824 points) and hurdler on hold but, with the help of Dr Tommie White, an assistant coach at ESC, she eventually came to terms with the tragedy and returned to the track a stronger young woman.

While the focus in the build up to the 2014 World Indoor Championships was on Pearson returning to form after her hamstring troubles of last year, Ali continued her progress, clocking a world lead of 7.80 in retaining her US title in Albuquerque on 25 February.

Pearson knocked the US hurdler off the top spot with her 7.79 run in Berlin on 1 March, a performance that the defending champion equalled in Sopot on Friday in her first-round heat.

When the title was on the line in the final, though, Ali put pressure on the favourite from the off, moving alongside her at the first hurdle and keeping her foot on the gas – to such an extent that Pearson buckled at the final flight, losing momentum as she gave it a hefty whack. Ali took gold in 7.80, equalling her personal best, with Pearson the runner-up in 7.85.

“The goal was just to go for it,” Ali said. When the gun went off, I went as hard as I could. I knew Sally gets out really well and I wanted to match that.

“It was a tight race. I’m just happy I was able to come up with a victory.

“There’s so much that I take from my coach, Ryan Wilson (the world 110m hurdles silver medallist). He always tells me, ‘You’re really fast,’ and he’s had me working on 60m races this year.

The plan certainly paid off for the 25-year-old Ali, who lives in North Hollywood. “I’m still excited,” she said. “I’m trying to process everything that’s happened.

“As for Sally’s status as favourite, I try not to think about the favourites. Our event is unpredictable. Not only Sally, but other girls could also win.

“I just try to stay focused on my own performance. I’m happy that it was all able to come together for me.”

Pearson, to her credit, was magnanimous in defeat. "It wasn’t my night,” she said. “It was Nia’s and I have to congratulate her on a great performance. She was the best athlete out there.

“I have said all along that it isn't about times. It’s about the athlete who can run the best race and Nia did that." 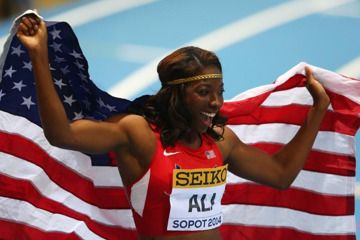