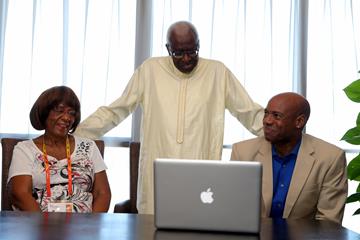 They discussed about the legacy of Jesse Owens, his place in the history of the sport, the Jesse Owens Foundation and the fact that the multiple gold medallist from the 1936 Olympic Games in Berlin was the greatest hero of President Diack, himself a former top-class long jumper.

”I was three years old in 1936 when Jesse was winning his four gold medals in Berlin. I later heard about his feats and it became my dream to become a long jumper. In 1972, I had a chance to meet him at the Olympics in Munich, I was in the same hotel with him, and we had a long discussion about his life,” remembered President Diack.

”We met again Montreal at the 1976 Olympics, where he graciously gave me his hat, the hat of the American team and his autograph. I invited him to Dakar, to my country and he was very keen to come. I think what he accomplished, at that particular moment in 20th century history, was extraordinary,”

”And the four records in the same day, in less than one hour, in a collegiate meeting in Ann Arbor (Michigan, USA) in 1935. How good was that long jump of 8.13?”

Mike Powell was another who remembered the man and his impact on the sport, not just in Berlin.

”He was a great competitor, four world records in one day, Wow! And the fact, that he jumped 8.13 in  what by modern standards were big leather boots with nails on the bottom, and on dirt. Amazing, amazing. And don’t forget the 200 yards hurdles and the 100 yards sprint too.”

Powell continued: ”In 2012, at the at the London Olympics, 8.13 would have gotten the bronze. That’s how far ahead he was, 80 years. For me, Jesse Owens was a great motivation.

Beverly Owens Prather paid tribute to other people who were involved in ensuring that the name of Jesse Owens resonated with grandeur eight decades after the height of his career.

”Herb Douglas deserves a lot of credit, he’s the one, that started the Jesse Owens Annual Awards Banquet. It was a lot of work, but it’s a heartfelt job, that he thought so much of daddy. That trophy is spoken of so highly by so many people, it’s just a great feeling.”