The sky’s the limit for Lavillenie, the flying Frenchman who was born to vault

For Renaud Lavillenie, the IAAF World Indoor Championships has been an opportunity to put his feet up, to rest and recuperate.

Happily, the flying Frenchman is off his crutches in Sopot and walking once again. His mind is starting to turn to the skies again, without any limits to his vaulting ambition.

The 27-year-old Olympic pole vault champion might have suffered some painful collateral damage when attempting to soar, Icarus style, to the improbable height of 6.21m in Sergey Bubka’s backyard in Donetsk on 15 February but the lacerated left ankle, which required a dozen stitches, has left him wholly undaunted.

On the day that his successful clearance at 6.16m in Dontesk was ratified by the IAAF as the definitive pole vault world record, removing Bubka’s 6.15m indoor mark from 1993 and the Ukrainian’s 6.14m outdoor best from 1994, Lavillenie reflected on his reasoning for testing the airways beyond 6.20m.

“I always want more and 6.21m sounded good to me. It’s in my mind now. I had to know. I had to see how it’s going to be in the future, because I am still young. I’ve still got three very good years ahead of me, so I have to make some tests. I have to try a lot of things.”

Lavillenie has made changes this winter, switching from a 5.10m to a 5.20m pole, and using a 7cm higher grip. The idea was to increase the energy at the point of plant and the results were clear to see in Donetsk.

The question now, as he looks ahead to an outdoor season in which he will make his debut on the IAAF Diamond League circuit in Shanghai on 15 May, is whether Lavillenie will be attempting to progress centimetre by centimetre or by the 5cm margin he was bold enough to try in Donetsk.

“My goal wasn’t to break the world record again. My goal was to try a jump that was 5cm higher and to see how my body was going to feel in that part of the air at that level.

Lavillenie expects to be back in training in two weeks, getting ready to hit the heights again in the 2014 outdoor season. As well as looking to the future, though, the outright holder of the pole vault world record was asked to cast his mind back and clarify a story that his first vault was on a beach at the age of four with a pole made by his father.

“Yes, that is correct,” Lavillenie replied. “The first actual connection I got with the pole vault was when I was one week old. When I got out of the maternity ward, my father had a competition at home. 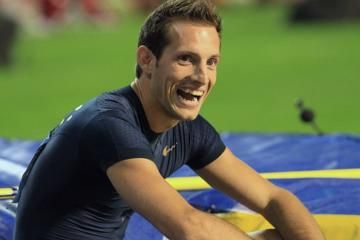