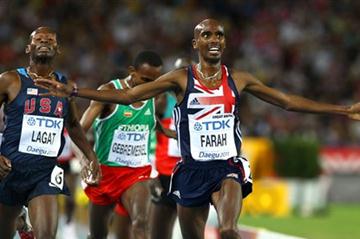 Mohamed Farah of Great Britain celebrates as he crosses the finish line ahead of Bernard Lagat of the USA to claim victory in the men&#39;s 5000 metres final (Getty Images) © Copyright
10 FEB 2012 Feature

Road to London may go through Istanbul

World 5000m champion Mo Farah talks about his training arrangement, his early season races, his new charity and foundation, and the likelihood of competing at next month’s World Indoor Championships in Istanbul.

“I'm writing this from Albuquerque - I arrived here a few days ago for a training stint at altitude before I return to the UK for my next race.

“I opened my season in Glasgow with 1500m and then raced over a mile in Boston last weekend, which didn't go so well because I fell over. It happened on the first lap just as I was trying to come to the front, but my long legs got in the way and next thing I know I was flying on to the track!

“It's coming up to a year now that I've been training with Alberto Salazar, and this is my first full winter with the group. It's going well and I'm in a good place, so at this time of year I just need to keep doing what I'm doing.

“I've spent a lot of time in Kenya over the winter and it's great to be able to focus solely on training, especially in such an important year. It was quite a contrast to return to the UK for my first race of the year in front of the great crowd in Glasgow who cheered me on to win.

“Since winning the World Champs last year I've learned that the added attention is just something you have to get used to, but I enjoy it and it's all good. I really enjoy what I do and it's nice to have such good support.

“I've lived in Oregon for around a year now. I love the UK, but it definitely helps being based in the USA as there are fewer distractions than there would be if I was back in Britain. Here, I'm able to focus better on training and obviously benefit from the guidance of Alberto.

“I went back to Somalia, my country of birth, in September after the World Championships and soon after I set up the Mo Farah Foundation. The aim is to provide aid - such as maize, cereal and drinking water - to those most in need. I recently auctioned the GB kit and shoes I wore in my Glasgow race and it raised £2000 for the charity, which will go a long way to helping those in need.

“As athletes, we spend a lot of time just eating, sleeping and training, but at the same time you want to do what you can for good causes, which is why I set up this charity. You can find out more about it at www.mofarahfoundation.co.uk.

“Anyway, I'd better get back to the Albuquerque mountains for another training run. Hopefully in my next race I'll stay on my feet and put on a good show for the fans in Birmingham!”