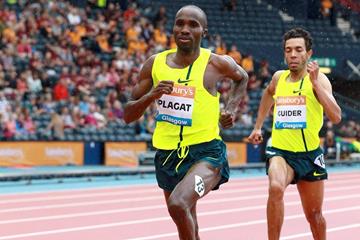 Kiplagat the prince of the track after Monaco 1500m win

Silas Kiplagat’s decisive 1500m victory at the IAAF Diamond League meeting in Monaco may have come as a shock to most observers – including the female stadium announcer, who greeted his defeat of his Kenyan compatriot and two-time world champion Asbel Kiprop with an expansive “Ooh, la la la la!” on Friday (18).

However, what he described as his “best ever win” came as no big surprise to him.

“It is a great track, a great stadium, and the conditions were excellent. So I’m thinking my win and result is no surprise. I was aware I can do it.”

The shirt he held in his hand had been removed immediately after he crossed the line and used as a prayer mat as he knelt to give thanks for a performance that surpassed even the marvellous victory achieved on the same track a year earlier by Kiprop.

Kiplagat’s mark was a Diamond League record, trimming 0.08 off the 2013 time set by Kiprop, who suffered a huge disappointment after having prepared himself for an attempt on the record El Guerrouj set in Rome 16 years ago by uncorking what was then the fastest 800m time of the year, 1:43.34, at the Diamond League meeting in Paris earlier this month.

“It was a tough race,” said Kiprop, whose ambitions still appeared on track until the smaller figure in a Dayglo lime vest moved out into lane two and passed him as they entered the final straight.

Kiplagat is now thinking in terms of mounting a world record attempt himself.

Asked about the possibility, he responded with a grin: “Why not? I have the fast time now, but why not be faster and attack the world record? I’m still young and ready to train for it.”

Where and when have to be decided but if that effort doesn’t happen this season, perhaps it might be Kiplagat, rather than Kiprop, who will arrive in Monaco next year with his sights set on El Guerrouj’s time.

On that occasion, in what was the first season of the IAAF Diamond League, Kiplagat was a newcomer who announced his quality by winning in 3:29.27, the fastest time of the year.

His European debut impressively trimmed five seconds from his personal best, and put him into the elite category of middle distance runners who have gone under three-and-a-half minutes for the blue riband event.

A year later, he returned to the Stade Louis II to win in another best time for the year, 3.30.47, destroying a field which included fellow Kenyan Nixon Chepseba, New Zealand’s 2008 Olympic silver medallist Nick Willis and Sudan's two-time world indoor 800m champion Abubaker Kaki with his surge over the final 300 metres.

It was this innate finishing speed which his coach, the three-time world 3000m steeplechase champion Moses Kiptanui, noticed in him as a teenager when he was set on pursuing a career over longer distances.

Kiptanui managed to change his mind, obviously to great effect.

However, Kiplagat will not be in Glasgow later this month to defend his title as he missed the national trials – and unlike other absentees David Rudisha, the 800m Olympic champion and world record holder, and Ezekiel Kemboi, the double Olympic 3000msteeplechase champion, he was not offered a wild card to compete by the Kenyan athletics federation.

Instead, he now plans to concentrate his attention on winning this season’s Diamond Race in the 1500m. He currently has 12 points, five more than Kiprop and Djibouti’s Ayanleh Souleiman

A gold medal at the African Championships in Marrakech next month is also part of his plans and Kiplagat could also compete in the IAAF Continental Cup in the same Moroccan city in September.

But that will certainly not be the furthest extent of championship ambition for a runner who also has a silver from the 2011 IAAF World Championships, where he finished behind Kiprop.

“This gives me confidence for the next years with the World Championships and Olympic Games,” he said. “I should attack the top position there.”

We have been warned.