Leonel Suarez in the Decathlon Javelin in Daegu (© Getty Images)

After overcoming one of his most challenging years to win a second Olympic medal, Cuban decathlete Leonel Suarez is quietly confident of securing a third consecutive IAAF World Championships medal in Moscow.

The 25-year-old sustained tendinitis in his take-off leg during the High Jump contest of the Olympic Decathlon in London. The injury had been lingering since then, but he is hopeful he will recover in time for his season opener in Götzis, his only event before Moscow.

The 2011 Pan American Games champion is also eying the Talence meeting in September as his third and last competition of the 2013 IAAF Combined Events Challenge, which he won in 2011.

“Despite the tendinitis, I have been able to train all other nine events. I am now using my left leg as the take-off leg in the Long Jump,” said Suarez.

In training he will focus on two or three events contested on the same day of the Decathlon (100m, Long Jump, Shot Put and 400m) on one day and then work on the Discus, Pole Vault and the Hurdles on another.

Suarez’s 2012 season at one point looked in danger as he showed surprising high-blood pressure signs which limited his training, but he recovered in time to claim a second consecutive Olympic bronze medal.

“I cherish every medal, but considering the challenges I faced, the bronze in London is very special and confirmed my consistency on the top,” he said. “It is a great motivator to move forward and aim at higher goals.”

While nursing the injury, Suarez has competed in two individual events this year.  In March he threw 45.85m in the Discus, just 40cm shy of his PB, and then cleared 5.00m in the Pole Vault to equal his personal best.

“We are working to reach 50m in the Discus and 5.30m in the Pole Vault,” he added. “That should give us some extra points. We continue to work on the track events as well.”

"It is crucial for Leonel to strengthen the upper portion of his lower body to increase the length of his steps for the track events,” explained his coach, Gavino Arzola. “That will also improve his flexibility."

“I look forward to competing with the world’s best in Götzis,” said Suarez, who last March married Yesenia Villareal, the Mexican record-holder in the Long Jump and Triple Jump. “It allows me to assess how my training is going in the lead up to Moscow. But staying healthy is the No.1 priority. If I have to skip Götzis, I will because the top priority is the World Championships.”

The decorated athlete is aiming at a third consecutive World Championships medal after his silver in Berlin and bronze in Daegu. “I am aware I have to tally close or more than my PB (8654) to stay on the podium,” added the Cuban record-holder indoors and outdoors.

“I have overcome many battles in my career. That is the nature of the Decathlon,” he concluded. “Moscow is no exception and I will be ready for it.”

BACK
Pages related to this articleAthletes
Leonel Suarez 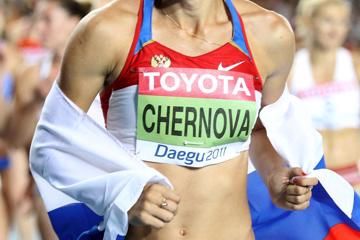