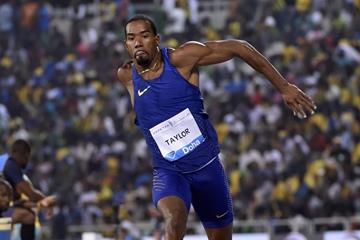 Taylor on his competitive fire: ‘I will attack every competition like it’s my last’

It was the best triple jump competition of all time. The only time two men had jumped beyond 18 metres. And Christian Taylor came in second.

Even after he went on to the exceed the 18-metre barrier three more times in 2015 and claim a second world title, that defeat in early May to Pedro Pablo Pichardo stuck with him.

“I became the biggest loser of all time," Taylor said. “There were two guys over 18 metres, but I was the loser.”

Taylor’s 18.04m was not enough to beat Pichardo’s 18.06m. The takeaway from that night in Doha? A historic mark doesn’t guarantee a win.

“I will not take anything for granted," said Taylor. "I will attack every competition like it’s my last. That’s the goal now.”

He avenged that loss to Pichardo. First in Lausanne, when Taylor countered Pichardo’s 17.99m with two jumps beyond 18 metres. And again at the World Championships in Beijing, when Taylor pulled off an 18.21m final-round leap to win gold. With that jump, he broke free of his year-long rival Pichardo and moved within striking distance of Jonathan Edwards’s world record of 18.29m.

As he racks up IAAF Diamond League wins and inches closer to the world record, he is aware that his performances have recalibrated what is possible in the event. After a season that went nearly perfect, the question is what to do for an encore.

Those eight centimetres, from 18.21m to 18.29m, are the focus for Taylor in 2016. Forced to pick between a world record and Olympic gold, the 25-year-old chooses the world record – with the caveat that he already owns an Olympic title.

And how will he get there? Taylor sees room for improvement in the second phase.

“That’s what Jonathan Edwards did very, very well," said Taylor. "His contact times were very quick, but he was just patient on that step, that was his float. That was the thing that made the biggest difference and I think if I can put myself a little bit closer to the pit… my last phase is very, very strong."

He will also need company. Triple jumpers don’t line up next to their competition, but they feed off the escalation of marks. Last year Pichardo provided something to chase. At the Prefontaine Classic, it was Will Claye who revved Taylor up when Claye grabbed the lead with his final jump, reaching 17.56m. Just like in Beijing, Taylor responded on cue and jumped out to 17.76m to win the competition.

“I’m a showman and you don’t want be out there rocking by yourself and not have people around you," he said. "I challenge everyone, let’s put on a show. I can’t do this by myself. I can’t jump 18 metres at practice, it’s not going to happen."

The Hayward Field crowd enjoyed the late round back-and-forth on Saturday. Though the jump was a world lead, Taylor admits he feels behind where he was last year at this time when he already had that 18.04m.

Other than missing the big mark, everything else is falling into place. After jumping 18.21m, 17 metres feels like “another training day”. In those training days, he leans on his background in the 400m. He has a personal best of 45.17 in that event and runs 350-metre repetitions in practice.

“I know that no other jumper is training as hard as me.” He is also working intelligently. Taylor’s decision to switch take-off legs in 2015 has been seamless. The choice to move from left to right has given him new energy and, he believes, the opportunity for a longer career.

“It’s not really who is the most talented; sometimes it can be just who’s healthy.”

Taylor’s next appearance on the track comes in Birmingham where he will compete in the long jump, “just to take a little mental break”. Then, it’s back to triple jump in Stockholm to continue his chase for one thing he doesn’t have and hopefully getting a little help from his competitors.

“I need that atmosphere I need that energy, so I challenge all the other jumpers, let’s rise to the occasion," said Taylor. "Let’s put on a show, but let’s help each other.”