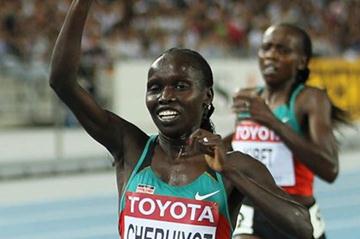 As both an agent and a coach, Ricky Simms knows a thing or two about athletes.  When asked to size up his newly crowned 5000m/10,000m double gold medallist Vivian Cheruiyot, Simms doesn't mince words.

Cheruiyot, 27, who stands only 1.55m tall and is a feathery 38 kilos, always knew she had the right stuff to be a champion.  In 1998, when she was only 14, she took second in the Kenyan cross country championships in the junior division, qualified for the IAAF World Cross Country Championships, and took fifth in the junior race, a remarkable achievement for a 14 year-old.  She had already put a lot of kilometres in her legs as a child.

"In Kenya normally school is far, and we are used to go in the morning five kilometres, come back for lunch, and go back in the afternoon, and come back in the evening," Cheruiyot explained.  "We normally go (back and forth) running (to save time).  I discovered my talent when I was in school, and I started training. That is the time I discovered I have a talent."

Cheruiyot moved up to the silver medal position at World Cross in the junior division in 1999, beaten by the soon-to-be-great Werknesh Kidane of Ethiopia.  Still just 15, Cheruiyot won the Kenyan national title at 5000m later that year, then won the bronze medal at 3000m at the IAAF World Youth Championships in Bydgoszcz and the 5000m at the All-Africa Games in Johannesburg.  She would win her first World Cross junior title in 2000 in Vilamoura, and later that year she took second in the Kenyan Olympic Trials in 2000, and made the 5000m final at the Sydney Olympics as a 17 year-old, finishing 14th.

"From that time I was progressing well," Cheruiyot said of her days as a junior.

Cheruiyot said last night that none of this would be possible without the support of both her husband, Moses Kiplagat, and Simms who is both her manager and coach.

"What makes me who I am is the care of my husband, the care of my manager and the staff of his management, and also the training camps I normally do back at home, even when I come to London," Cheruiyot said.  "This is my talent, so I have to use it wisely."

Kiplagat, who had the pleasure of kissing his wife in the mixed zone last night just after her victory, provides complete support for his wife when she is in Kenya.  He times all of her workouts at the dirt track in Iten where they live.  He drives her to training, and he even cooks for her.

"We go to training together almost every day," Kiplagat said and responded, "yes, of course, yes" when asked if he cooked for his wife.   "When she's there I just cook for her.  Ugali, sometimes we do githeri, that's a mixture of beans, rice and corn," he said.

Simms said that he monitors Cheruiyot's training very closely, and speaks to her every day.  He gets a phone call or e-mail every morning with the results of her workouts.  He said she is incredibly disciplined and a very hard worker.

"She does everything I tell her," Simms said.  "If you ask her to send in the results of the workout before ten o'clock, you get them at 9:50.  Some other guys are not as good as that. She's got this attitude that you want to win everything, and she's not scared to say what she thinks to people."  He continued: "But, I think she's just got an amazing talent.  She works very well.  She has three (male) training partners; they just run everyday with her, so that helps her quite a bit.  Her husband, Moses, is fantastic support for her."

Cheruiyot's bulging trophy case is still missing one important item: an Olympic medal.  She finished fifth in Beijing, and Simms said that she'll be tough to beat in London next year, especially given that she normally lives there for part of the year.  Simms said that her ability to adapt to any race makes her a true champion.