The wait is over; Bolt is ready to go in Beijing

Usain Bolt gave a warning to his rivals that he is not about to surrender his seven-year reign as the undisputed boss of men’s sprinting by declaring the “new improved” Usain Bolt is “ready” to compete at the IAAF World Championships, Beijing 2015.

Speaking at the Puma and Jamaican Athletics Administrative Association (JAAA) press conference at the NUO Hotel Beijing on Thursday (20), a typically laidback Bolt seemed completely unflustered by his far-from-perfect preparation for 2015.

He was relaxed and open and fully prepared for the latest chapter of his storied career.

It was seven years ago when Bolt burst into the public consciousness with a series of jaw-dropping performances at the 2008 Olympics and his return to Beijing’s Bird’s Nest Stadium – where he will begin the defence of his world 100m title on Saturday – brought a smile to his face.

Since those spellbinding Games, Bolt has collected global titles for fun, winning eight world and an additional three more Olympic gold medals at the London Games.

But times change and when questioned about what the main differences are between the Usain Bolt of 2008 and the 2015 version, he said: “I’ve been in the sport a long time and seen a lot. I would say I’ve changed, I’m different, but a much improved Usain.

“In training I’ve definitely had to sacrifice a lot more. I can’t just train for three months; I have to do it properly now and put a lot more into training.”

It has doubtless been Bolt’s most challenging build up to a major championship. He is currently ranked only sixth in the world for the 100m with a best of 9.87 and he is 19th on the world lists with a best time of 20.13 in the 200m. He has scarcely competed this year with just three races each over the 100m and 200m distance.

His rivals appear to be as strong as at any point of his seven-year reign as the No.1 sprinter, led by the 2004 Olympic 100m champion and 2005 world 100m and 200m champion Justin Gatlin of the USA.

Yet there has been extenuating circumstances. A joint problem – which in his words meant, “I was not able to turn on the power” – that badly hampered him during the first half of the season has since been treated. The power has returned as evinced by his confidence-lifting performances at the IAAF Diamond League meeting in London where he twice ran 9.87.

On the eve of the World Championships in Beijing, he is in a happy place.

“I’m feeling good; I wish I could have had more races but training is good,” he says. “Coach (Glen Mills) is happy and that is good for me to know that. In London I had two good races and although I haven’t competed much since then, it was important for me to do the training rather than the competition.

“I’ve not done a 200m for a while (13 June) although I’ve done a few time trials in training, but the 100m has given me confidence. Things normally come together for me at championships, I’m not worried.”

There is little question that Bolt has proved the supreme major championship competitor of his generation. His consistent ability to produce his best when it counts is almost second to none and for that he shouldn’t be doubted. He himself knows what he needs to do.

“Starting is always my issue coming into the championships, but I’m where I am supposed to be. I just now need to go out and execute,” he says. “Competition is competition, it is just about who executes well on the day. I have to get out quickly over the first 50m.”

As for the media speculation questioning his long-held dominance of the sport, he simply answered: “It is not for the first time, but I try not to worry about the media and try to put the work in to get things right.”

At a packed media conference hosted by two-time world 110m hurdles champion Colin Jackson, Bolt was asked a wide-ranging set of questions on everything from his dietary habits in Beijing to his slightly lengthy-looking beard.

Bolt – not a political animal – was even asked for his comments on the new IAAF President Sebastian Coe.

“As long as he is good for the sport and he does the right thing by the athletes, I’m happy he is elected,” he says.

He admitted he had “zero” plans for a birthday party tomorrow as he would be in bed early to prepare for Saturday’s first-round heats of the men’s 100m. “I’m sure someone will give me a cake,” he adds.

Yet for those doubters, knockers and critics, he had a simple response.

“I’m at my best, I’m running well,” he said. “Everything is starting to come together. I’m ready to go.” 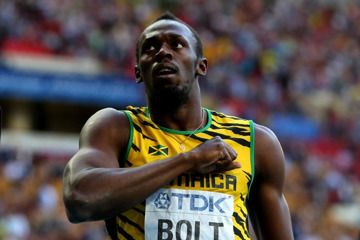 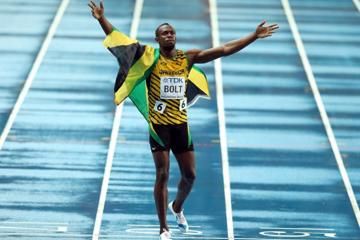