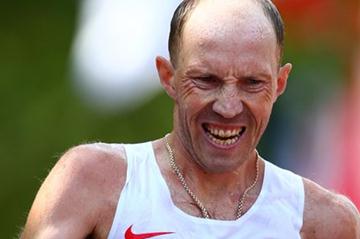 The winner of the men’s Olympic 50km race walk likes a good horror story – and Sergey Kirdyapkin has endured a few in his time as a top race walker.

In fact, once the Russian had a second go at establishing a commanding lead just after 40k it was plain sailing in the London sun.

The man who has now collected a hat-trick of major wins that include IAAF World Championship twice, the IAAF World Race Walking Cup on home soil in Saransk, and now Olympic gold, wrote his own happy ending.

Ending, because the 32-year-old took a long time before answering a question about whether he wanted to continue. After all, what more is there to win?

However, he part-ducked the question by suggesting he would have a 'long sit down’ with his coach before deciding whether the thought of even more torment in the heat elsewhere had appeal.

"I don’t know what’s next," he shrugged. "It’s true I have everything that matters in walking, but we’ll have to see when we go home."

"A career outside walking? It's difficult to imagine."

Home is the Saransk Centre, unique in the athletics world as the only specific race walking centre.

It is here, 600k east of Moscow, that both Kirdyapkin and talented wife Anyisa Kirdyapkina, entered for the Olympic women's 20km, train day in and day out.

The centre has the kind of facilities that breed champions – and there have been plenty over the past 10 years.

There is a 330m track, because three laps all but measures a kilometre, and therefore makes it easier to keep score of intervals. And just as good, there is a tarmac 2km loop though the forest that has its own special sweeping machine to shift the leaves each morning. Talk about leaving no stone unturned.

But despite the best facilities known to race walkers on planet earth, Kirdyapkin revealed he had no idea when he woke up this morning whether this would be his day.

"It was only after I got into the race, and started picking off the kilometres did I get an idea I was going well," he added.

He was reduced to the land of the walking dead at the 2006 IAAF World Walking Cup and has a few DNFs opposite his name as well over a 10-year career at the top.

However, he has been training well since he won the World Race Walking Cup in May, and reckoned he had prepared well. Well enough to rewrite his personal best by nearly a massive three minutes despite the warmest day of the Olympics so far.

Kirdyapkin also agreed there must be something in couples’ race walking together.

Apart from he and Kirdyapkina, silver medallist Jared Tallent will also be watching wife Claire line up for the 20km.

The Russian said: "I think it’s because the other person in the partnership understands what is required to try to win competitions at this level.

"Of course, Anyisa knows me well, but she also knows what it takes to devote time to the sport. Maybe, that’s the same for Jared."

Kirdyapkin now has plenty of time to indulge a passion for reading the books of Mikhail Bulgakov while the man with a science degree decides what to do next.

Bulgakov’s most famous book – The Master and Margarita – imagines a fantasy visit by Satan on Russia.

In the un-London like Dante’s Inferno, there were no satanic verses – just the reward of the Russian national anthem at the victory ceremony for a champion with an Olympic record.