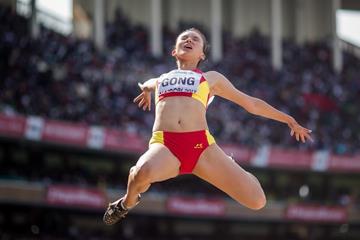 Though she has displayed tremendous ability in two athletics disciplines, rising star Gong Luying is likely to direct much of her focus towards the long jump for the foreseeable future in an attempt to help her province close the gap on their compatriots in one of China's best track and field events.

And while she has proved she has the potential to shine in the 100m, Gong's performances this year have indicated that she is making the right choice.

At the Chinese U18 Championships in Nanchang in April, the 17-year-old clocked a 100m PB of 11.83 but she settled for the silver medal in the final before going on to earn gold in the long jump.

Similarly, at the Asian U18 Championships in Bangkok in June, she secured the long jump title and scooped 100m bronze.

Refusing to sweep aside her talent in the short dash, she again turned out in both disciplines at the recent IAAF World U18 Championships Nairobi 2017, and on this occasion she was saved by her performance in the field event.

After finishing fifth fastest in the 100m heats, Gong withdrew from the semifinals which were held in torrential rain as a precautionary measure ahead of the long jump event.

Sacrificing a potential medal, she was rewarded when she returned to Kasarani Stadium three days later. Adding two centimetres to her personal best with a fourth-round leap of 6.37m, she filled the top step on the podium.

"I'm glad that I was able to get a personal best," Gong said.

"I felt I had the ability to jump farther, but I didn't think I would because the rain on the second day of the competition agitated me and I couldn't run fast.

"So I'm not crazy about the performance but I'll take it."

Born in Jinhua in the province of Zhejiang, on the east coast of China near Shanghai, Gong started participating in athletics at the age of 13 while in her second year of middle school.

Four years later, with the help of coach Zhang Renjie, she has established her place among the brightest long jump prospects in a country which boasts the world's largest population.

Her performance in Nairobi helped China earn second spot in the medals table, with the East Asian powerhouse nation bagging a total of 11 medals, including five gold.

Now she wants to assist in the efforts back home by lifting the performance levels of local long jumpers.

China has a proud history in the discipline, with six youth girls having sailed beyond 6.50m. And with a global title under her belt, Gong feels she can motivate other young athletes in her province to stamp their place among the country's elite jumpers.

"In our province the school of athletics is very strong, but we do not have a lot of athletes in the long jump," Gong says.

"I think this proves we have the ability."