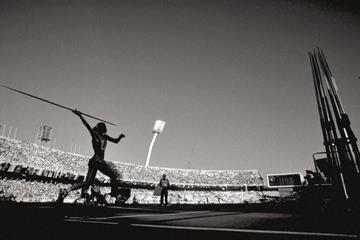 The IAAF is saddened to learn that Angela Nemeth, the 1968 Olympic javelin champion, died on Tuesday (5) after a long illness, aged 68.

Born in February 1946, Nemeth began her sporting career in basketball and represented Hungary internationally, but she soon discovered her talent for throwing.

She made her international athletics debut at the age of 20, competing at the European Championships on home soil in Budapest. She exited the competition in qualifying but steadily improved over the next few seasons.

She improved on her PB in 1969 with 60.58m, producing the best mark in the world for the second year in succession. Later that year, she won the European title in Athens with a championship record of 59.76m.

In both 1968 and 1969 she was voted Hungarian sportswoman of the year.

She tried to defend her title at the 1972 Olympics, but missed out on making the final by just 14 centimetres, finishing 13th.

She married a basketball coach after the 1968 Games and later went by the name of Angela Ranky.

Although she was no relation to fellow Hungarian javelin thrower Miklos Nemeth, the 1976 Olympic champion and former world record-holder, the pair shared the same coach, Jeno Koltai.