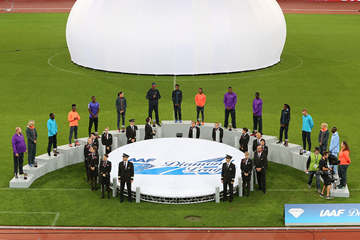 The IAAF Diamond League is delighted to announce the distribution of event disciplines for the 2016 season.

Commencing on 6 May 2016 in Doha, the seventh season of the IAAF Diamond League comprises 14 of the best invitational track and field meetings in the world.

The meetings are spread across Asia, Europe, the Middle East and the USA, and compose the top tier of the IAAF’s global one-day meeting competition structure.

In each of the 32 event disciplines there is a 'Diamond Race' with points available throughout the season.

The winners of each Diamond Race receive a US$40,000 cash prize and a spectacular trophy, but more importantly they will have shown season-long consistency to earn the honour of being considered the world No.1 performer in their event.

Each of the 32 event disciplines is staged seven times with the top three athletes being awarded points at each meeting – four for the winner, two for second place, and one for third – with the exception being the finals in Zurich on 1 September and Brussels on 9 September, where the points are doubled.

The IAAF website will provide extensive coverage of the entire 2016 IAAF Diamond League with previews, reports, features and other material appearing in this section.