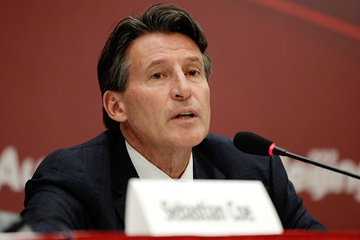 In our continued effort to be as transparent as possible and to ensure that the public have the same access to the information that the IAAF provides the media, we now share the latest set of 'frequently asked questions' and our answers.

Questions were asked on Friday (20) concerning the IAAF Council's vote in April 2015 to award the 2021 World Championships to Eugene, USA.

The IAAF began its reply with the following statement: "Much was written about the decision to award the 2021 World Championships to Eugene. The following quote is an extract from the IAAF announcement at the time: 'In granting the championships to Eugene the IAAF Council have made a clear choice on a strategic decision that enables us to take advantage of a unique opportunity that may never arise again, whereby public authorities, the private sector, the national Olympic Committee, NBC and a particularly enthusiastic public are joining forces.' The vote for Eugene was 23-2 in favour."

QUESTIONS from The Sunday Times and the IAAF's ANSWERS

QU: Why did the IAAF not make public its dealings with the Eugene bid over 2021, which started as early as January 26, 2015?

AN: The IAAF has many discussions with cities that put themselves forward to host the championships so they fully understand what the requirements are. There are no reasons to publicise these discussions. The IAAF received a number of letters from supporters of the Eugene team expressing their interest and desire to host the IAAF World Championships, dating back to early 2015.

QU: Why was the Gothenburg bid not made aware of these dealings and given a fair opportunity to respond?

AN: It appears that the President and the General Secretary felt they wanted to explore what was a unique opportunity that they then presented to Council for discussion and decision. This was an unusual, but not unprecedented, process. There is nothing in IAAF procedures that requires the IAAF to inform bidders of what potential rivals are doing.

QU: Why was the IAAF’s bidding procedure suspended to give Eugene the World Championships 2021?

AN: The bidding process for the 2021 World Championships was not suspended, it was never formally opened. Eugene was selected as it was considered to be a unique strategic opportunity that may not come around again. Eugene was building a new stadium and it would only be built to a size and a configuration capable of hosting a World Championship if they had been awarded a championship for it to host. This was an exceptional moment which in the case of Eugene which would never rise again.

QU: President Diack had been in touch with the Eugene bid since January, receiving a number of letters from their representatives, and yet the 2021 bid not put on the agenda for the April IAAF council meeting in Beijing? Why?

AN: This is not correct. The 2021 World Championships was clearly part of the agenda circulated to IAAF Council Members in the normal manner prior to the Beijing meeting.

QU: Why were council members not properly prepared for the 2021 bid before the vote?

QU: After the decision, comments were made about the “strategic importance” of the bid going to the US – as well as it representing a unique opportunity? However, Eugene had already been turned down for the 2019 World Championships during a decision taken in November 2014 in favour of Doha. What had changed?

AN: Eugene had lost narrowly to Doha to host the 2019 World Championships and praise was given at the time to their excellent bid. The Eugene bid was even stronger in April 2015 in that it uniquely combined guarantees from the State of Oregon and the University of Oregon with the support of the United States Olympic Committee and a commitment from NBC to show the Championships live across the USA.

QU: Was any evaluation, at any point, undertaken of the 2021 Eugene bid, by an IAAF evaluation commission? If not, why?

AN: The 2019 bid had received a very detailed examination by the IAAF Council only 6 months earlier (October 2014) and the bid team were on hand in Beijing to answer further questions from the Council Members before the vote was taken.

QU: How does the IAAF respond to the Gothenburg bid team's allegation that the 2021 bid did not go through a fair transparent bidding process?

AN: The Council was aware at the time that a departure from the normal process would attract criticism and opening addressed the unusual but not unprecedented process explaining it was seen as an opportunity not to be missed. It was not the first time that the bidding process had been by-passed (Osaka 2007).

QU: Does the IAAF think it appropriate that Seb Coe, as an IAAF member, was allowed to take part in the vote on whether Eugene should host the 2021 World Championships, given that he is an ambassador for Nike, on Nike’s payroll, and Eugene as a city are closely connected with the Nike brand?

AN: Sebastian Coe sought the advice of the IAAF Ethics Commission when he was appointed to the role as Chairman of the Evaluation Commission for the 2019 World Championships, and openly declared his interests, as he has consistently done. On that basis his long-standing role with Nike has never been seen, nor is it seen, as a matter of ethical concern.

The following IAAF press release was issued on 16 April following Council's vote to award the 2021 World Championships to Eugene:

During the afternoon session of the second day of its meeting in Beijing, IAAF Council awarded Eugene, USA, the 2021 IAAF World Championships.

The proposal to award the IAAF’s premier competition to Eugene, bypassing the usual bidding process, was taken in response to what was seen as a unique strategic opportunity to host the IAAF World Championships for the first time in the USA.

The decision followed a presentation to the IAAF in recent months by Eugene, USA. The candidature of the city from the State of Oregon and USATF, who mounted a failed bid last November for the 2019 edition of the championships, uniquely combined the commitment of the funding by the governor of Oregon with the support of the United States Olympic Committee and the commitment of NBC to produce and broadcast in cooperation with Universal Sports the championships live across America.

Council’s decision was taken in order to grant the sport’s access to one of the most historically successful countries in athletics as well as the most powerful economy in the world.

There have been precedents in the past, most recently in the awarding of the 2007 IAAF World Championships to Osaka, Japan, which was also done without a bidding process.

“In granting the championships to Eugene the IAAF Council have made a clear choice on a strategic decision that enables us to take advantage of a unique opportunity that may never arise again, whereby public authorities, the private sector, the national Olympic Committee, NBC and a particularly enthusiastic public are joining forces,” commented President Diack.

“Although this decision departs from the usual procedure, I am delighted that my Council colleagues understood the enormous opportunity presented to us to access a key market and have taken a decision in the interest of the global development of our sport,” concluded President Diack.

Vin Lananna, who led Eugene's bid for the championships, commented: "I thank President Diack, the Council and USATF President Stephanie Hightower and CEO Max Siegel in supporting the bid. We promise to deliver an outstanding championships for the sport of track and field in America and around the world."