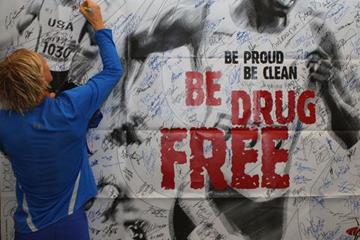 IAAF statement to the 2013 World Conference on Doping in Sport

Abby Hoffman, an IAAF Council Member and a Member of the IAAF’s Medical and Anti-Doping Commission, delivered a strong statement about the IAAF view of the new WADA Code to the 2013 World Conference on Doping in Sport organised by the World Anti-Doping Agency (WADA) in Johannesburg on Wednesday (13).

The statement was delivered on behalf of the IAAF President Lamine Diack, the IAAF Council, and the 212 Member Federations of the IAAF, as well as the millions of participants in the sport around the world.

“Since the adoption of the current (WADA) Code in 2009, the IAAF has implemented an increasingly aggressive anti-doping campaign and we have been in the vanguard of new measures to combat doping.

“We have developed an intelligence-based testing programme tailored to the specific characteristics of training and competition in our sport. We have made significant investments in an Athlete Biological Passport programme which has already proven effective for both target testing and the prosecution of blood doping cases.

“In the past 12 months alone, the IAAF has concluded more than 20 doping violations using our Biological Passport system. More cases will follow.

“Our policy (and practice) for long term storage and re-testing of samples collected at our World Championships has enabled us to detect doped athletes years after the events in question through the application of new scientific methods and technology to previously collected samples.

“We have meaningful partnerships and information-sharing agreements with many anti-doping partners around the world as well as with governmental and law-enforcement agencies. These relationships are critical to understanding and apprehending individuals and networks involved in doping.

“We have backed up our testing programme with a rigorous system of results management both at national level and internationally before the Court of Arbitration for Sport (CAS).

“The consequence is that there are currently 321 athletes serving a period of ineligibility under IAAF Rules, 296 of them for a sanction of two years or more.

“The fact that both high profile and lesser-known athletes have been caught is, in our view, a function of the success of our anti-doping programmes, not an acknowledgement of its failure. It reflects our determination to make athletics at all levels a sport that is clean, fair and honest.

“The IAAF remains realistic about the prevalence of doping in athletics but, by committing significant resources to an anti-doping campaign that is based on intelligence, we have been consistently successful in apprehending cheaters.

“We know there is still more to be done, including working more closely with key member federations and national anti-doping agencies to strengthen their domestic anti-doping programmes.

“The IAAF lauds many of the proposed revisions to the Code which will facilitate the greater use of investigations, place greater emphasis on profiling, motivate a more concerted focus on athlete support personnel, extend the statute of limitations, provide guidance to make testing regimes more efficient and rationalize the roles and relationships of the many players involved in anti-doping. These measures build on the foundations in place under the current Code. WADA should be congratulated for developing tools tailored to the modern day fight against doping.

“However, our support for many positive elements of the new Code is not without reservation. Specifically, we have a critical concern about proposed provisions to the new Code on the issue of sanctions. We speak on this subject from a position of considerable experience having overseen since 2009 the imposition of more than 500 sanctions in athletics under the current Code.

“The overwhelming majority of athletes in our sport have internalised the values of fair play and authenticity. Providing sport authorities deliver a level playing field, these athletes do not need to be deterred from the delusion and deception of doping, but for those athletes (and support personnel) who have chosen to cheat or are dealing with the temptation to do so, deterrence is critical.

“Deterrence takes two forms: the probability of being apprehended by increasingly sophisticated testing regimes; and the prospect, if caught, of facing a significant penalty.

“Penalties are a critical element of the anti-doping campaign and must serve as an adequate and proportionate response to the nature and seriousness of the infraction that has been committed. Athletics readily accepts to apply lesser penalties for less serious infractions where it is clear that they are unintentional in nature. But proportionality works both ways; and severe penalties must equally be imposed for serious infractions.

“The Athletics Family has long been unequivocal about the need for penalties for serious doping offences which reflect the seriousness of the infraction; and in the belief that serious penalties for serious offences are the most effective deterrent to doping. This is why we have actively pursued increased sanctions for serious violations under the ‘aggravating circumstances’ provisions of the 2009 Code, working alongside our members and national agencies and, where necessary, appealing lenient decisions from our national federations to CAS.

“At our most recent Congress in Moscow this past summer, our 200+ Member Federations again unanimously expressed their support for four year bans – just as they have done at many previous Congresses and major forums.

“Many of our members and our athlete community regard four years as a minimum not the maximum.

“One might think in the circumstances that the IAAF would welcome the proposed Code revisions on penalties. But we do not – or not unequivocally at least.

“The new Code partially meets our expectations on penalties but in our view still comes up short in a number of key areas.

“Our concerns are the following:

“First, is the provision that four-year sanctions may be reduced to two years by an athlete simply claiming no intention to cheat (when the violations we are talking about are by their very nature intentional). As it stands, there is no qualifying language in the Code that requires athletes to provide any objective corroborating evidence beyond their own denial of intention.

“This is particularly troubling given that the new Code proposes that the standard of proof on the athlete in establishing no intention be lowered from that of ‘a comfortable satisfaction of the Panel’ to ‘a balance of probabilities’ (and, where, by contrast, the standard of proof on ADOs to prove ‘intention’ in specified substance cases in order to increase a sanction from two-four years remains at the higher standard of ‘a comfortable satisfaction’).

“In 95% of the cases we face, the athlete denies doping outright; and the blame is routinely laid at the door of a sacrificial coach, doctor or other third party. The new Code provisions on intention play firmly into the hands of these athletes and their unscrupulous entourage and will only serve in our opinion to make cases more procedurally complicated, time-consuming and costly than they ought to be.

“Our second concern is the proposal (in  Article 10.6) which would allow an athlete who has committed a serious doping violation to obtain a reduced sanction – from four down to two years – simply by admitting what has already been proven by an anti-doping organisation or a sport federation.

“This provision, if invoked on a regular basis, could severely undermine the deterrent effect of sanctions as few four-year sanctions would in fact be imposed.

“Our third main concern is that the new Code abandons the current concept of ‘aggravating circumstances’ – for example, evidence of a doping conspiracy, the use of multiple prohibited substances, the use of a prohibited substance on multiple occasions etc. – which has been easily understood and has proven to be an effective method for seeking increased sanctions under the current Code, at least in athletics.

“Our conclusion is clear: while the stated objective of the new Code on penalties is to make longer – and specifically four-year penalties – the norm, there is a significant risk that the specific provisions of the Code will undermine and, in effect, work against the realisation of that goal.

“Athletics will do its part, but we believe there needs to be a collective responsibility of the global sports community to move not just rhetorically but in reality to four-year sanctions for serious violations.

“WADA has a key responsibility in this respect in overseeing the application of four-year sanctions for serious violations across all sports. WADA must be prepared to take affirmative action to enforce the four-year sanction, including appealing cases to CAS whenever four years has not been properly applied in serious cases; otherwise, there is a significant risk that we will all be dragged down to the lowest common denominator.

“And, CAS Panels must similarly be prepared to enforce four-year sanctions under the Code when the evidence before them is clear.

“It is no good the IAAF unearthing – as we did – a serious case of pre-meditated and sophisticated cheating involving multiple athletes if the CAS Panel is ultimately only going to impose a sanction of two years and nine months.

“Time will tell whether the sanction regime under the new Code will make more severe penalties the norm. Frankly we believe there are too many means of escape.

“We recommend therefore that WADA commit now to a mid-term review of sanctions (after no more than three years at most) to assess if the new Code is delivering intended outcomes with regard to four-year sanctions for serious doping violations and, if it is not, there should be a commitment from WADA to undertake a further review of the sanctions position in the Code at that time.”