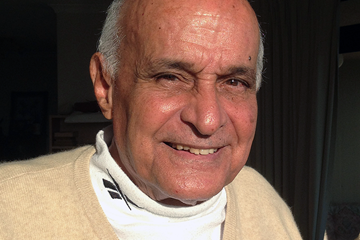 The IAAF is saddened to learn of the death of former sprinter Mike Agostini, who died on Thursday (12) at the age of 81 after suffering from pancreatic cancer.

Born in January 1935 in the Port-of-Spain, Trinidad, Agostini was an all-round sportsman who enjoyed soccer, boxing and athletics.

He first came to international prominence on his 19th birthday when he beat Olympic champion Lindy Remigino to set a world indoor best over 100 yards in Washington.

Later that year, he won the 100 yards title at the British Empire and Commonwealth Games in Vancouver, coming out on top in a much-hyped dual against Australia’s Hector Hogan. In 1955, representing British West Indies, he took the 100m silver and 200m bronze at the Pan American Games in Mexico City.

In 1956, he was denied world records on two occasions due to technical faults. In March he clocked 20.1 in the 220 yards, but the last stopwatch missed the flash of the gun. Two months later, he equalled the world record for the 100 yards with a clocking of 9.3 in Long Beach, but the time was not put forward for ratification because the third stopwatch malfunctioned.

In the summer of 1956, he reached both the 100m and 200m finals at the Olympic Games in Melbourne, finishing sixth and fourth respectively.

After retiring from competitive athletics in the late 1950s, he moved to Melbourne and took up jobs as a freelance journalist and then as a teacher. He also briefly coached Ralph Doubell, who went on to win gold in the 800m at the 1968 Olympics.

In 1961 he became an Australian citizen and married Pamela, a 54-year partnership that would see four children and nine grandchildren follow.

In the mid-1960s, he became the editor and publisher of a newly launched magazine, Track and Field. It was the beginning of a long and successful career in the industry, during which time Agostini edited several major athletics magazines and authored nine books.

Agostini is survived by his four children – Dianne, John, Catherine and James – and nine grandchildren.

Mike Hurst and David Tarbotton for the IAAF