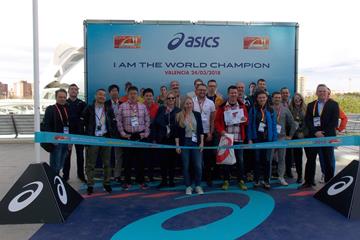 A fully booked group of 21 people participated in the Observer Programme that took place on the margins of the IAAF/Trinidad Alfonso World Half Marathon Championships Valencia 2018.

The programme, designed by the IAAF, provides prospective future hosts of IAAF events with an intimate behind-the-scenes look, in real time, at the operational demands of organising World Athletics Series (WAS) events.

Facilitated by Matt Newman, the CEO of Run4Wales and the Local Organising Committee for the 2016 World Half Marathon Championships in Cardiff, the four-day event, held from 22-25 March, included presentations and discussions on the overall planning and delivery of an IAAF World Half Marathon Championships from both LOC and IAAF points of view, covering topics that included civic engagement, marketing rights, logistics and communication.

"It’s an honour to have been able to present on the IAAF's Observer Programme and tell the story of Cardiff 2016, to pass on everything we learnt through bringing such a successful event to Wales’ capital city," Newman said. "Valencia has done a wonderful job of hosting the event and it’s great to see the ongoing popularity of the IAAF World Half Marathon Championships as a global event."

"For our team, taking part in the Observer Programme in Valencia was the real kick-off of the two-year-long preparation period before the 2020 IAAF World Half Marathon Championships in Gdynia," said Piotr Jakóbik, a member of the Gdynia local organising committee. "Getting behind the scenes insight, the opportunity to experience the race itself and having a chance to talk to the former IAAF Worlds organisers --Matt Newman from Cardiff, for instance-- gave us much better understanding of what we can expect and what we should aim for in the coming months and years.

"It was also a perfect occasion to personally meet some key IAAF staff members who we are going to work with across all the functional areas of the event. This surely shortens the distance and makes things easier," Jakóbik said.

Other participants also praised the programme.

"The IAAF Observer Programme is a wonderful platform for local organising committees and future prospects to learn from previous hosts and get a behind-the-scenes tour of the event from the host organisation,” said Wade Morehead, Executive Director of the Houston Marathon Committee. “Attendees are provided a wide array of functional area information from a variety of impressive LOC and IAAF leaders to obtain a clear understanding of expectations regarding levels of service and contract deliverables."

Jakóbik found it inspiring as well.

"I want to congratulate our friends in Valencia on putting on a great event," Jakóbik said. "The bar is set extremely high but we have as many as 24 months to jump over it."