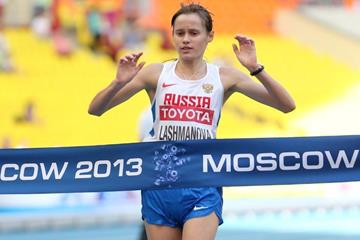 The 2013 season of the third of three annual IAAF Challenge series which are decided on standings drew to a close last weekend as Talence hosted the final competition of the IAAF Combined Events Challenge. Earlier in the month, the IAAF Hammer Throw Challenge ended in Rieti, while the IAAF Race Walking Challenge reached its climax at the IAAF World Championships in Moscow.

In each of the three Challenge events, there is USD $202,000 in prize money on offer with the individual series winners getting $30,000. Prize money is dependent upon the usual anti-doping controls.

In the IAAF Combined Events Challenge, the top three scores of each athlete achieved within the series is combined to find an overall winner. Melnychenko rebounded from a below-par 6169 in Gotzis in her first Heptathlon of the year to win in Kladno with 6416.

The Ukrainian went on to record victories at the World Championships (6586) and in Talence (6308), bringing her overall tally to 19310. That proved to be enough to finish comfortably ahead of World silver medallist and Gotzis winner Brianne Theisen Eaton from Canada.

Germany’s Claudia Rath, who finished second in Ratingen and fourth in Moscow and Talence, finished third overall in the Combined Events Challenge, just 19 points ahead of Poland’s Karolina Tyminska.

The men’s contest was won by Belarusian Andrei Krauchanka, who won in Florence and Kladno at the beginning of the season. Although he finished 11th in Moscow, his score of 8314 brought his overall series total to 25084, which withstood the late-season challenge from athletes competing in Talence.

Canada’s World bronze medallist Damian Warner won in Talence, as he did in Gotzis, but finished 104 points adrift of Krauchanka in the standings. Germany’s Pascal Behrenbruch, winner in Ratingen, finished third overall.

World and Olympic champion Ashton Eaton did not finish in Talence, leaving him with just two completed decathlons in 2013 and a long way from the top of the leaderboard.

As is the case with the Combined Events Challenge, the top three marks of each athlete competing in the Hammer Throw Challenge are combined to produce the overall standings.

For the first time in the four-year history of the IAAF Hammer Throw Challenge, the men’s and women’s titles were won by athletes from the same country. Fajdek and his Polish compatriot Anita Wlodarczyk took the overall titles with record scores.

Fajdek’s best marks came in Szczecin (79.99m), Dubnica (82.27m) and at the World Championships (81.97m), giving him a narrow six-centimetre advantage over Hungary’s Olympic champion Krisztian Pars, winner of the Hammer Throw Challenge for the past two years.

Lukas Melich of the Czech Republic, who took bronze in Moscow, finished third overall in the standings.

Former World record-holder Wlodarczyk was beaten in Moscow, but her consistency across the season paid off. She won the Hammer Throw Challenge by more than six metres from World champion Tatyana Lysenko.

Germany’s Betty Heidler, winner of the Hammer Throw Challenge every year since it began in 2010, had to settle for third.

The IAAF Race Walking Challenge differs slightly to the other two challenge contests in that winning marks aren’t taken into account for the overall standings. Instead, athletes are awarded points based on how high they finish at events within the series.

Ever since finishing second on her debut at the distance, Lashmanova has been undefeated over 20km. The Russian race walker notched up four victories in that event this year, three of which counted towards the Race Walking Challenge and gave her a winning tally of 38 points.

Portugal’s Ines Henriques, winner in Chihuahua and La Coruna, was a close second with 34 points as compatriot Ana Cabecinha was third overall after three podium finishes in the series.

Australia’s Jared Tallent took bronze in Moscow over 50km but won in La Coruna and finished third in Taicang to end the series with a winning score of 34, regaining the title he won in 2008.