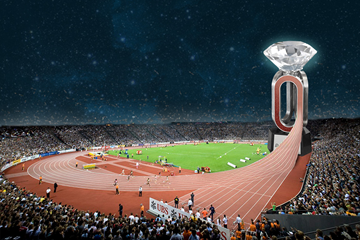 On Friday 6 September, the Belgian capital Brussels will be the host of the second final for the 2013 IAAF Diamond League series, where another 16 Diamond Race winners will be crowned.

However, in the remaining seven IAAF Diamond League disciplines, the Diamond Race is still open.

There are straight head-to-head duels for supremacy in four events.

The men’s 5000m should see a fascinating race between the Ethiopian pair of Hagos Gebrhiwet and Yenew Alamirew, with two points between the former and the latter, while the women’s High Jump will see an all-Russian battle between 2013 IAAF World Championships gold medallist Svetlana Shkolina, who is unbeaten this year, and her predecessor Anna Chicherova.

Chicherova has a one-point advantage, so unless neither of them are in the top three, the honours will go to whichever one of the two finishes ahead of the other.

The men’s 400m Hurdles pits Puerto Rico’s Javier Culson against World and Olympic silver medallist Michael Tinsley in the dash for cash, with Culson having a four-point lead over his US rival.

The men’s Pole Vault will see Renaud Lavillenie bid to come out on top against Konstantinos Filippidis.

The odds heavily favour the Frenchman who finished ahead of his Greek rival in 12 out of their 13 encounters over the last year, dating back to the London 2012 Olympic Games, where Lavillenie got the gold medal.

Only when Lavillenie failed to clear a height at this year’s IAAF Diamond League meeting in Lausanne, which Filippidis won, has the advantage gone the other way.

With a five-point gap between the two, Filippidis has to win and hope that Lavillenie finishes no higher than third if he is to cause an upset.

In the men’s Javelin, there is an intriguing three-way contest.

Czech Republic’s 2013 World champion Vitezslav Vesely is the favourite and has a solid six-point advantage but two of his predecessors, Finland’s 2013 world leader and Moscow silver medallist Tero Pitkamaki and Norway’s Andreas Thorkildsen, are still in the hunt.

In the men’s 200m and women’s 3000m Steeplechase, there are no less than four athletes in contention in both events.

In the sprint, there are a number of athletes who have amassed Diamond League points but who are not competing, but it is always likely that there could still be some late changes to the entry list.

Nevertheless, as things currently stand, Jamaica’s 2013 World Championships silver medallist Warren Weir is in pole position with 10 points and is six points ahead of his three rivals for the Diamond Race.

The Steeplechase should see all four remaining protagonists on the start line with the Kenyan pair of Milcah Chemos and Lidya Chepkurui sharing the lead with 12 points.

Without going into all the possible permutations of how the Diamond Race could be won, the simplest way of determining the destination of this year’s Diamond Race, with Chemos the victor in 2012, will be if one of these two wins Friday’s battle over the barriers.

Diamond Race statistics concerning the 16 finals in Brussels can be downloaded as a pdf from right-hand side of this page.