Reims, FranceMahiedine MekhissiBenabbad smashed the 2000m Steeplechase World Best* with a 5:10.68 run to highlight the 4th stop of the Alma Athlé Tour in Reims on Wednesday. Dayron Robles won the 110m Hurdles in 13.09 while Daniel Bailey and Yohan Blake tied for first place in 100m in 10.00 (w-0.1).

Five days ago in Nancy, Bouabdellah Tahri made a significant improvement to the 20-year-old 2000m World Best (5:15.43 by Julius Kariuki), running 5:13.47. Mekhissi-Benabbad, present in Nancy for the 1500m which he won in 3:35.24, immediately congratulated Tahri for his feat and certainly was an attentive observer and considered his own prospects over the rarely run distance in Reims.

Mekhissi-Benabbad, escorted by Kenyan pacemaker David Langat, covered the first lap slightly faster than Tahri before the pace was reduced, as they reached 500 metres in 1:16.36 (Tahri’s pacemakers did 1:15.80). South African Ruben Ramolefi led the pack through the first kilometre in 2:37.06, more than one second behind Tahri’s pace. The third lap, covered in 65.01, seemed to lower the probability of a new standard.

However, when Langat stopped at 1500m (3:57.10), Mekhissi-Benabbad was just a scant 0.01 slower than Tahri, which quickly brought a record back into the picture. Tahri was impressive in his last lap (60.46) in Nancy, but his rival displayed a long a powerful stride to come home in 58.26. The new World best, 5:10.68, was about three seconds faster than Tahri’s run, and a five second improvement on Kariuki’s mark!

“It’s everyone’s dream to break a world record at home,” said Mekhissi-Benabbad, whose house is located close to the track. “Because the crowd was so helpful, it was my third pacemaker tonight!”

“This is my first record ever, as I never had broke a national record,” said the 2008 Olympic 3000m Steeplechase silver medallist, who didn’t seem surprised by his astonishing performance.”

If your preparation is good, everything is supposed to go fine in competition. This record will give me a confidence boost for the rest of the season, because I’m still in a preparation phase and I’m about to start the specific training for the 3000m steeple.”

Farouk Madaci, his new coach since last winter, refused to make any projection as how this performance would translate over the traditional 3000m distance.

“We can’t calculate how much it’s worth because this event is closer to 1500m than 3000m, but for sure it announces good performances to come,” Madaci said.

Mekhissi-Benabbad, who ran 8:08.82 in Rabat on 6 June without pacemakers, will continue the dual on 8 July at Lausanne’s Samsung Diamond League fixture, before maybe meeting Tahri at the French mationals (10) and at the European Championships. Madaci though is looking even further.

“Mahiedine is only 25 and certainly not at his peak. He is very clever, serious, courageous, and has outstanding physical abilities. Now, in France we have the two best steeplechasers in the World and this is super for everyone.”

“I felt very good today, even if I was unlucky at the start because my elbow bumped with my neigbour’s. I’ve just been lifting heavy maximum weights at training so I’m expecting to have fresher legs and run much faster either in Lausanne (8 July) or Paris (17 July).”

His Cuban teammates also impressed in Reims. Yipsi Moreno took the Hammer Throw with a 73.66m throw in the third round and Alexis Copello, with a 17.24m leap, defeated Briton Phillips Idowu by 10 centimetres in the Triple Jump.

Savigne improves to 6.91m in the Long Jump

However, the surprised came from Yargelis Savigne, the Triple Jump specialist, who won the Long Jump with a 6.91m leap, significantly improving her 6.77/6.87w personal bests. Unfortunately, she had to stop the competition after her third attempt as a preventive measure in order to protect her right ankle.

“I’m not preparing for the long jump at all, but I will maybe do it again this season only if it helps my triple jump,” Savigne said. “The reason I jumped here was the lack of competition in my usual event. My goal is to triple jump 15.20 to 15.30 this season.”

Bailey and Blake inseparable in 100m

Unlike the other races, the outcome of the men’s 100m was hardly decisive. Indeed, training partners Daniel Bailey (Antigua) and Yohan Blake (Jamaica) were inseparable in a photo finish, with both sharing the victory in 10.00, well ahead of American Mike Rodgers (10.19). Blake had the worst start of the field (reaction time given as 0.19), as compared to Bailey (0.15). Yet, Blake produced an acceleration good enough to take the lead, but Bailey displayed the best top speed and was leading by 60m. Blake’s late surge was not enough to make the difference on the finish line.

“This is a wonderful result into the wind (-0.1),” said Blake. “This is only my second competitive race this season. This is a blow out of me, soI’m looking for more races to improve my time. I’m now looking forward to race in either Gateshead or Barcelona in early July.” Running 10.00 on a reputedly slow track is an impressive performance. “If a track is slow, that’s the sprinter’s job - to make it fast,” Bailey said. «”I was not looking for something big, I just wanted to finish healthy. Today my drive phase a was a little bit long. That’s something I’ll work on in Gateshead.”

* The IAAF does not ratify World records in the 2000m Steeplechase

BACK
Pages related to this articleDisciplines
500 Metres 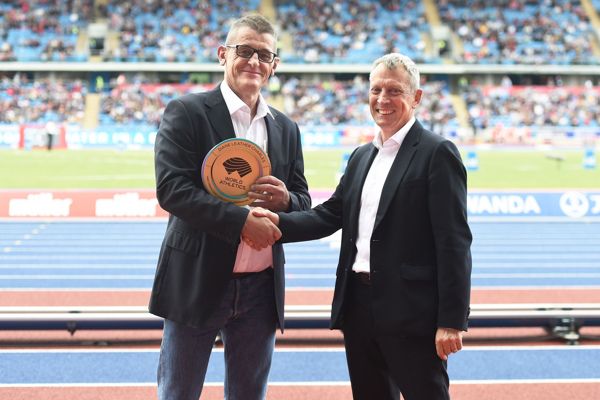