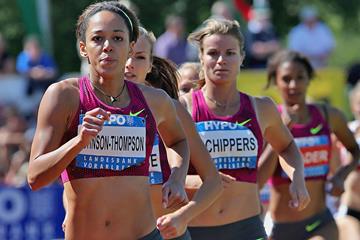 With Ashton Eaton not in the picture, it was a different kind of summer season for the decathlon.

The decathlon and indoor heptathlon world record-holder had topped the world lists for the previous three seasons but in 2014 he took a break from the decathlon to instead focus on the 400m hurdles.

Eaton’s one combined events competition was a good one though, scoring 6632 to win the heptathlon at the World Indoor Championships with the second-highest score in history, narrowly missing his own world record.

Belarus’s 28-year-old Andrei Krauchanka returned to the top at the World Indoor Championships, winning his first global medal since 2008. In Sopot he took another silver medal, as he did in 2008, producing a 2.21m indoor personal best in the high jump to add two centimetres to his previous PB set nine years prior.

USA’s two-time world champion Trey Hardee won in Gotzis, as he had done in 2011, scoring a world-leading 8518. The 30-year-old then surpassed that mark, albeit wind aided, with his winning score of 8599 at the US Championships.

At the start of the first day of the decathlon at the European Championships in Zurich, Krauchanka made it clear that although his outdoor season was almost non-existent beforehand, he was going for the gold medal.

Just like he did in Sopot, he excelled in the high jump, clearing 2.22m to better his absolute PB set indoors earlier in the year and his outdoor best of 2.16m set more than 10 years prior at the 2004 World Junior Championships.

On the second day, Krauchanka emerged as a comfortable winner with a world-leading 8616, just one point shy of his personal best set when winning in Gotzis in 2007. It was his second European title, following his indoor gold from 2011.

Following on from his fourth-place finish at the 2013 World Championships, France’s 22-year-old Kevin Mayer set a personal best of 8521 for the silver and third place in the world list. Russian Ilya Shkuryenov scored 8498 for the bronze and fourth on the world list.

In a year lacking a senior global outdoor championship, the Hypo Meeting in Gotzis in early summer can always be relied upon to attract a significant part of the world’s elite. 2014 was no exception as four of the top six heptathlon marks in the world this year were set in the small Austrian town that has become the ‘Mecca’ of combined events.

This year’s Hypo Meeting was something of a showcase for the new generation of heptathletes as the average age of the top nine finishers was 22. All but one of them set a PB with the average improvement exceeding 200 points.

For both the winner Katarina Johnson-Thompson, who scored a world-leading 6682, and third-placed Dafne Schippers, who scored a PB of 6545, this was their only heptathlon of 2014.

But second-placed Brianne Theisen-Eaton went on to win the Commonwealth Games while Gotzis fourth-place finisher Nadine Broersen and fifth-place finisher Nafissatou Thiam were involved in the medal fight at the European Championships.

In the end they had to settle for silver and bronze behind Antoinette Nana Djimou. The championship situation seems to always bring out the best in the Frenchwoman who now has four European titles – two outdoors, two indoors – and whose three top heptathlon scores were set at major championships.

The new generation who were on display in Gotzis are closely followed by an outstanding crop of teenagers. Four surpassed 6000 points and especially impressive was Britain’s Morgan Lake who – just like Carolina Kluft 14 years earlier – took the world Junior title at age 17.