The first of a two-part look back at the IAAF Diamond League in 2016. Below, some of the highlights of the series' first seven meetings.

For the second successive year, this meeting witnessed an epic triple jump struggle – but this time it was in the women’s event as South American rivals Caterine Ibarguen and Yulimar Rojas challenged each other in the manner of Christian Taylor and Pedro Pablo Pichardo in 2015.

The 20-year-old Venezuelan, world indoor champion in Ibarguen’s absence two months earlier, set a national record of 14.61m in the second round; the double world champion responded with 14.77m on the next jump.

Rojas improved her record to 14.79m in the third round, but two rounds later her 32-year-old Colombian rival managed 15.04m – the second-best legal jump of her career, a world lead and a meeting record.

Dafne Schippers, the Netherlands’ world 200m champion, equalled her second-best 100m time of 10.83 but still lost to 2015 US champion Tori Bowie, who equalled her personal best of 10.80 to top the early season world list.

Local hero Mutaz Essa Barshim was eighth with 2.26m in a high jump won by Erik Kynard of the United States with 2.33m.

A shock victory for US pole vaulter Sam Kendricks disrupted Renaud Lavillenie’s quest for an unprecedented seventh straight Diamond Race. The 23-year-old sergeant in the US Army Reserve kept tabs on the French world record-holder with a third-time clearance at 5.83m, and then cleared 5.88m, also at the third attempt.

Lavillenie failed twice at 5.88m before moving up for one fruitless attempt at 5.93m.

Faith Kipyegon, second to Genzebe Dibaba at the IAAF World Championships Beijing 2015, laid down an Olympic marker by taking 0.16 off her own Kenyan 1500m record with 3:56.82.

The 22-year-old’s effort was a meeting record and topped the 2016 lists. Fellow Kenyan Hyvin Kiyeng, the world 3000m steeplechase champion, also set a world lead and moved to sixth on the world all-time list with 9:07.42.

At the bell, Bahrain’s 19-year-old world U20 champion Ruth Jebet held a 10-metre lead before stumbling and falling to allow Kiyeng past. Jebet’s consolation was an Asian record of 9:15.98.

Another middle-distance world lead, and meeting record, came in the men’s 5000m, won by Ethiopia's Muktar Edris in 12:59.96.

High jumpers encroaching on the track caused half the men’s 800m field to hesitate at the start of their race. Among those impeded was world and Olympic champion David Rudisha, who was fifth in 1:46.24, his slowest time in five years. Fellow Kenyan Ferguson Rotich won in 1:45.68.

The 24-year-old’s time was less than two seconds off her best of 14:14.32, set at the previous year’s meeting in Shanghai, which stood third on the all-time list. “I feel disappointed because I wanted to break the world record,” said Ayana. “However, the wind was too disturbing today.”

For the first three kilometres Ayana was on course to challenge the world record of 14:11.15 set in 2008 by fellow Ethiopian Tirunesh Dibaba, but after the elements had taken their toll she had to settle for a meeting and African all-comers’ record.

This historic meeting in Morocco’s capital city – taking the place of New York in the IAAF Diamond League roster – also enabled Caster Semenya to strengthen her grip on the women’s 800m event in Olympic year. The 25-year-old South African won in 1:56.64, topping the seasonal listings.

Home athlete Kendra Harrison became the second fastest 100m hurdler of all time in 12.24, and 19-year-old Ruth Jebet became only the second female 3000m steeplechaser to better nine minutes, finishing less than a second off the world record of 8:58.81 set in 2008 by Russia’s Gulnara Galkina.

Harrison’s US record had only been bettered by Bulgaria’s Yordanka Donkova, whose world record of 12.21 was set in 1988.

Jebet, a naturalised Kenyan running for Bahrain, was pushed to the line by Kenya’s world champion Hyvin Kiyeng, finishing in an Asian record of 8:59.97. Kiyeng's 9:00.01 placed her third in the all-time rankings. Home runner Emma Coburn was third in a national record of 9:10.76.

Faith Kipyegon won the women’s 1500m in a world-leading 3:56.41, bettering the Kenyan record she had set in Shanghai.

In the men’s javelin, world silver medallist Ihab Abdelrahman of Egypt set a meeting and stadium record of 87.37m with his final throw, equalling the world lead.

There were home victories for triple world champion long jumper Brittney Reese, with 6.92m, and world shot put champion Joe Kovacs, who replaced his own mark of 21.47m at the top of the 2016 world list with 22.13m.

The Ethiopian world champion could not manage a final lap within the 65 seconds she needed to better the 2008 record of 14:11.15 set by compatriot Tirunesh Dibaba.

Kenya’s Commonwealth champion and 2013 world silver medallist Mercy Cherono ran a personal best of 14:33.95 and was still adrift by almost the length of the final straight.

Caterine Ibarguen extended her unbeaten run of triple jump victories to 34 after a best of 14.74m moved her beyond Kazakhstan’s Olympic champion Olga Rypakova, who led early on with 14.51m.

On a cool evening, Jamaica’s Elaine Thompson produced a season’s best of 10.87 to win the 100m.

Conseslus Kipruto maintained his Diamond Race dominance in the 3000m steeplechase, winning in 8:01.41 after his Kenyan rival Jairus Birech had fallen at the second hurdle while leading on the last lap.

Britain’s Olympic, world, European and Commonwealth long jump champion Greg Rutherford maintained his unbeaten start to the season with a best of 8.31m.

One of the longest and most distinguished unbeaten runs in recent athletics history came to an end as Colombia’s double world triple jump champion Caterine Ibarguen, last defeated in the London 2012 Olympic final, saw her total of successive wins ended at 34.

Ibarguen’s best of 14.51m was overhauled in the last round by 14.61m from Kazakhstan’s Olga Rypakova – the last woman to beat her. The Colombian’s final response, 14.53m, fell just short.

Mutaz Essa Barshim, the second-best high jumper of all time thanks to his 2.43m effort in 2014, rediscovered something of his old form for the first time in 2016, producing a winning mark of 2.37m that topped the season’s world list.

There were victories for three Kenyans in world-leading times.

On his IAAF Diamond League debut, Poland’s 19-year-old shot putter Konrad Bukowiecki led the competition after his first-round effort of 20.77m, following it up with 21.14m, a world U20 best.

That inspired world champion Joe Kovacs to throw 21.51m before finishing off with 22.01m – just two centimetres off the 25-year-old meeting record set by Werner Gunthor of Switzerland.

Victory in the 100m hurdles went to the USA's 2013 world champion Brianna Rollins in 12.56 with Olympic champion Sally Pearson, making up ground after injury, seventh in 13.14.

Olympic pole vault champion and world record-holder Renaud Lavillenie lived dangerously with two fouls at his opening height of 5.65m before winning with a best of 5.80m. 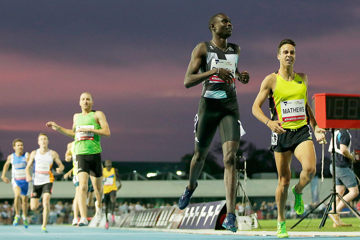