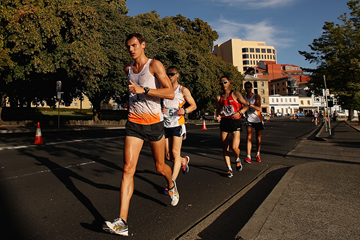 Adelaide, the capital city of South Australia but equally known in race walking as the home of Jared Tallent, will again launch the IAAF Race Walking Challenge with the Oceania 20km Championships on Sunday (19).

Hot sun and hot competition is the norm in Adelaide at this time of year, but competitors this weekend can at least look forward to unseasonably moderate conditions. The outlook for Sunday morning is cool and overcast with even the possibility of rain showers. Temperatures are predicted to range from 13 to 22 degrees Celsius, almost wintry in comparison to recent days with temperatures peaking in the low 40s.

Olympic bronze medallist Dane Bird-Smith heads the entries in the men’s 20km this year. After finishing second to Jared Tallent in 2013, Bird-Smith has won two of the four Oceania 20km titles since. He was second across the line in 2014 (when the race was in Hobart) but advanced to first after Tallent was disqualified, missed the race in 2015 and won last year.

Bird-Smith will no doubt be looking to bank maximum challenge points at his home event and thereby take an early edge in what could be a race to a position on the podium when this year's challenge concludes at the IAAF World Championships London 2017 in August.

A pared down challenge will still visit four of the IAAF’s six areas this year. From Adelaide and Oceania, the series will move on to two races in the North America, Central America and Caribbean area with stops in the Mexican venues of Ciudad Juarez (12 March) and Monterrey (19 March).

Next off will be Europe, with Rio Maior, Portugal, on 1 April before a visit to Asia with Taicang, China, on 15 April. Then it is back to Europe for the last two of 2017’s seven challenge competitions, the traditional venue of La Coruna in Spain on 3 June and the finale at the IAAF World Championships in London in a unique festival of race walking on The Mall on 13 August.

The known contenders for the top positions in this year’s challenge likewise exhibit the full range of internationalism.

The top five men and women in the 2016 challenge came from eight different nations across all six IAAF areas. Traditional race walking powers Australia and China were the only two nations with two representatives, the others coming from Ecuador, South Africa, Mexico, Italy, Brazil and Portugal.

All are certain to be prominent in the challenge again this year. Wang won the 20km at both the Rio Olympic Games and the IAAF World Race Walking Team Championships in Rome. Tallent won the 50km in Rome and was the silver medallist behind Matej Toth at the Olympics. Bird-Smith was bronze medallist in the 20km in Rio.

Chocho (DQ) and Shange (44th in the 20km) did not have successful Olympic campaigns but Shange walked a national record in finishing second in Adelaide last year.

Gonzalez was second in the women’s 20km in Rio after earlier winning at the Team Championships. Qieyang was fifth and second, respectively, in the same two events. Giorgi has been at or around the top of women’s race walking for many years, finishing second to world and Olympic 20km champion Liu Hong in both the 2014 and 2015 challenges.

De Sena was third in Rome and seventh in Rio while Henriques was eighth and 12th, respectively.

Besides Toth and Liu Hong, other top-flight championship race walkers who did not finish in the top five in the 2016 challenge include Brazil’s Caio Bonfim and Yohann Diniz of France.

Bird-Smith and Lamble the favourites in Adelaide

Bird-Smith will obviously start favourite in the men’s race in his home event. But there are some strong challengers, including two others from the top five in last year’s event.

Shange, who finished just two seconds behind the Australian last year, is back, and so, too, is Canada’s Evan Dunfee.

Dunfee performed well in Australia last summer, setting a national record in being first across the line at the Australian 50km Championships in December 2015 and finishing fifth in Adelaide three months later.

Chile’s Yerko Araya, seventh, and Jakub Jelonek of Poland, 10th, are also back from last year’s race. Quentin Rew from New Zealand, another regular on the Australian race walking scene, is also competing.

Jared Tallent may not be racing on Sunday, but his coach/wife Claire Tallent is entered in the women’s 20km.

The favourite will be Regan Lamble, who finished ninth at the Olympics. Beki Smith, 14th for Australia at the World Race Walking Team Championships in Rome last year, should also be prominent, along with Kelly Ruddick.