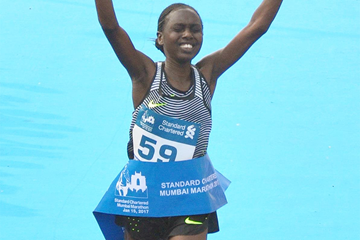 Ethiopia’s Solomon Deksisa leads a strong men's field for the Tata Mumbai Marathon, while Bornes Kitur will defend her title at the IAAF Silver Label road race on Sunday (21).

Deksisa, whose best of 2:06:22 is more than two minutes quicker than the course record, is the fastest man in the field. The 23-year-old ran that time when finishing second at the 2016 Rotterdam Marathon and after a third-place finish at the Toronto Marathon last October, he will be bidding for his first marathon victory in Mumbai.

The Indian all-comers’ record of 2:08:35, set by Gideon Kipketer at the 2016 edition of this race, could even be under threat.

“I’m in very good shape and I think I can run as fast as 2:06,” said Deksisa at the pre-race press conference. “A course record is possible, but I also want a personal best.”

Ethiopia’s Chele Dechasa and Abraham Girma, and Bahrain’s Shumi Dechasa, the latter running for his country in the last two IAAF World Championships marathons, are the three other men who have run faster than 2:07:00 in their careers. But a younger Ethiopian runner could perhaps be the man to spring a surprise on his faster rivals.

Aychew Bantie, 23, has few international credentials but clocked 2:09:40 in his one and only marathon to date, a high-quality affair in Amsterdam last October, and will have learnt a lot from that experience.

Joshua Kipkorir and Eliud Barngetuny, who were second and third in Mumbai last year, are among the prominent Kenyan runners in the elite field.

Kipkorir was second in last year’s race in a PB of 2:09:50 and is determined to go one better on Sunday.

“I ran 2:13 at altitude for a marathon in Nairobi in November and that was simple; it felt no harder than a long training run,” said Kipkorir. “People tell me the race could be hot, but that doesn’t worry me. I think 2:06 is possible on Sunday.”

“I feel I’m in good enough shape to regain my title and it might take a course record to do that,” he said.

Genemo's fastest time of 2017 was 2:26:06, set at the Vienna Marathon. She finished inside 2:29:00 in her other two marathons last year, including a win in the Ljubljana Marathon in October, while Kitur followed up her win in Mumbai by setting a personal best of 2:29:01 when finishing second at the Sydney Marathon in September.

“I am in better shape than last year,” said Kitur. “I cannot say how much better, maybe just a little, but definitely better.”

“My preparation has been going well and I think my experience of running here two years ago will certainly be an advantage,” added Genemo, who won by more than four minutes from Kitur in 2016. “In 2016, it was windy but not as hot as I expected and that was a big help.

“Of course I would like to win and that’s what I am aiming for but if I do get a victory, I doubt it will be by more than four minutes. One of the reasons is that my friend Amane [Gobena] is here.”

Based on form over the past two years, Ethiopia’s Amane Gobena will start as the favourite. Now 35, Gobena ran her personal best of 2:21:51 when finishing second at the 2016 Tokyo Marathon. She returned to the Japanese capital in 2017 and finished third in 2:23:09.

“I was told there was a chance I could go to the World Championships in London,” said Gobena. “When I was not selected, I was so disappointed that I stopped training completely for two months before starting training again. But it means I am not now tired coming here.”

Ethiopia’s Kumeshi Sichala and Tigist Girma return to the race having made the podium in the past – Sichala was second in 2015 and Girma third last year – and will no doubt be able to use their previous experience to good advantage on race day.

The Tata Mumbai Marathon has a total prize fund of US$405,000 in 2018. The elite runners will do battle for the US$42,000 first prize cheques in what is anticipated to be a spectacular race played out in front of thousands of spectators lining the course in India’s entertainment and financial hub.

“We have yet again increased the overall prize fund, re-inforcing the Tata Mumbai Marathon’s position as one of Asia’s most prestigious road race and one of the leading marathons of the world," said Vivek Singh, Joint MD of Procam International.