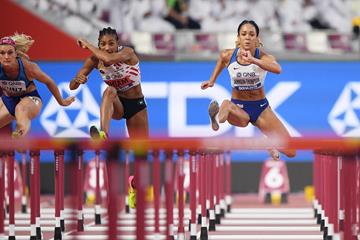 With most of the major athletics competitions and series of 2019 having reached their conclusion, we look back at the key moments of the year in each area of the sport.

The series begins today with a review of combined events and will be followed over the next eight days by reviews of all the other event groups.

It was an exciting season for the women’s combined events with a clear change at the top.

Following three major titles for Belgium’s Nafissatou Thiam in 2016 (Olympics), 2017 (world) and 2018 (European), Britain’s Katarina Johnson-Thompson was crowned the queen of the heptathlon in 2019. The Briton was easily the best combined eventer during a year in which she came close to bettering 5000 points in the pentathlon and 7000 points for the heptathlon.

The 26-year-old won her second European indoor pentathlon title in Glasgow in March with a score of 4983, her second best ever mark behind her lifetime best of 5000 which puts her second on the world indoor all-time list.

She completed two heptathlons during the outdoor season, first winning at the prestigious Hypo-Meeting in Götzis with a world-leading 6813 and then earning her first world title in Doha in October with 6981, breaking Jessica Ennis-Hill’s national record and moving to sixth on the world all-time list.

The defending champion, 25-year-old Thiam, never quite got on level terms with Johnson-Thompson at the World Championships, eventually finishing more than 300 points adrift in second place. The Belgian lost many points in her best events, having jumped 2.02 in Talence in a heptathlon earlier in the summer, she cleared 1.95m in Doha, and following a 6.86m national record in the long jump at the Birmingham Diamond League meeting, she managed just 6.40m in Doha. She was also 10 metres down on her javelin best, although by that point she had already out of gold medal contention.

Austria’s Verena Preiner emerged as the bronze medallist in Doha, her first major medal, having set a national record of 6591 in Ratingen in June.

Although they missed out on a medal in Doha, it was a good year for US heptathletes with Erica Bougard (6663) and Kendell Williams (6610) both topping 6600 points at the US Championships in Des Moines.

Nadine Broersen, the 2014 world indoor champion, made a welcome return to form, finishing sixth in Doha with 6392, her best score for four years. But Xenia Krizsan and 2015 world bronze medallist Laura Ikauniece were not so fortunate; they finished second and third respectively in Talence, Krizsan setting a Hungarian record of 6619 and Ikauniece scoring 6518, but injury ruled both of them out of the World Championships.

One year after breaking Ashton Eaton’s world record and raising his personal best by almost 300 points to 9126, France’s Kevin Mayer started the World Championships as the overwhelming favourite.

Super-experienced Canadian Damian Warner, meanwhile, led the world list after taking his fourth consecutive victory at the Hypo-Meeting in Götzis with 8711. It appeared that the rest of the best would be battling for bronze in Doha.

Mayer started his World Championships campaign convincingly, setting a big PB in the shot put and looked well on his way to a score in the region of 8800-8900. But then injury struck on the second day, leaving him unable to even get off the ground in the pole vault.

And Warner’s hope of finally getting a world title – after finishing between second and fifth at five straight global championships – was also ruined in the pole vault where he had to be content with 4.70m.

At the same time, 21-year old Niklas Kaul had begun moving through the ranks. The 2015 world U18 and 2016 world U20 champion sat in an inauspicious 11th place after six events, almost 500 points off the lead, but then followed it with successive PBs in the next three events, including a monster 79.05m throw in the javelin. It moved the German into third place, just 19 points off the lead, with just the 1500m remaining – an event in which he had by far the fastest PB.

He crossed the line with a seven-second margin over his nearest opponent, taking gold with a score of 8691.

Estonia’s world indoor bronze medallist Maicel Uibo, who had shown much promise over the past six years but up until 2019 hadn’t finished in the top eight at a major outdoor championships, took the silver medal with a PB of 8604.

What is especially interesting about the new champion Kaul is that he doesn’t fit the same mould of most other top decathletes of being stronger on the speed-orientated day one. All the previous 16 world champions have scored considerably fewer points on day two. In fact, Kaul’s day-two total of 4527 is a tally that has only ever been bettered by Mayer, who amassed 4563 en route to his world record.