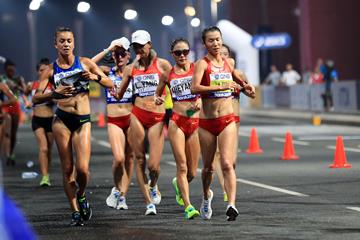 Our end-of-year reviews continue with a recap of 2019’s best race walking action.

The two outstanding performances in 2019 came from a relative beginner and a seasoned champion.

Fourteen years separate Glenda Morejon and Liu Hong, but they took the breath away for different reasons.

Liu had a stellar year to go with her glorious past. A 50km world record in her third race after maternity leave was trumped by a commanding performance along Doha’s Corniche at the World Athletics Championships. There, she ruthlessly claimed a hat-trick of wins to go with her Olympic gold in 2016, two other World Championships silver, Olympic bronze and existing 20km world record.

There were plenty of faces masked with pain from early steps to a plodding end. But Liu was all but inscrutable as she went through the gears. When she broke the tape, she didn’t even seem to be breathing that hard.

Despite her pedigree, she was far from favourite before the start. It’s doubtful anyone will make that mistake at the 2020 Olympics.

Morejon came under the banner ‘promising’ when she toed the line at the World Athletics Challenge Race Walking meeting in La Coruña in June.

She passed halfway in 42:55 and increased the tempo to sprint ahead of China’s 2017 world champion Yang Jiayu and Liu for a stunning 1:25:29 – the fastest 20km debut ever. It was not only a world U20 best, it was also a senior South American record and the best legal performance of the year.

Qieyang Shenjie finished just outside the top three in La Coruna, but her fourth-place finish contributed to her world No.1 ranking for 38 weeks as well as silver behind Liu in Doha.

The women’s Race Walking Challenge was close but Qieyang retained her title after victories in Rio Maior and Taicang, and the 10 points she picked up in Doha was enough to edge her ahead of Liu, 34 to 32.

The ever consistent Erica de Sena claimed her fourth podium in the last five challenge events. She finished behind Qieyang and Liu and just outside the medals in Doha, but dug out overall victory in the Around Taihu competition that wound up the challenge in October.

She started 2019 with sixth in April at Rio Maior, followed by a win in Lazaro Cardenas just two weeks later. The Brazilian followed up with a season’s best of 1:27:38 at La Coruna, and only gave way to the leading trio of Chinese in the last two kilometres at the World Championships.

Turkey made its mark in 2019 with a European U23 victory for Ayşe Tekdal in July and a national record (1:29:36) for Meryem Bekmez at La Coruña in June.

Lithuania also had reasons to cheer when Živile Vaiciukeviciute stuck at it to become surprise winner of the European Race Walking Cup in May on home soil in Alytus.

This was the year a Swede and several Japanese dominated the 20km scene.

Perseus Karlstrom hovered on race walking’s periphery until 2019, but victories in the Race Walking Challenge and European Race Walking Cup, as well as his bronze at the World Athletics Championships, saw him take a seat at race walking's top table.

The 29-year-old’s face was wreathed in smiles when he donned a Swedish fancy dress Viking helmet over the last few metres to break the tape in Alytus for the European Cup title in 1:19:54. He had already banked up challenge points towards a $25,000 payday after wins in Lazaro Cardenas in Mexico in April, and the Adelaide 20km in February. But that Alytus win, and a personal best of 1:18:07 in La Coruna in June, was a stark contrast to the Swede's grimace as he staggered over the line at the World Championships in 1:27:00.

The telling conditions in Doha meant even gold medallist Toshikazu Yamanishi had to settle for 1:26:34 – the slowest winning time in the 36-year history of the World Championships by a hefty three minutes.

The bespectacled Japanese could have done with rock star Elton John’s famous windscreen wiper specs as he splashed water liberally in a bid to keep cool. But blurred vision or not, there was little to challenge a man who clocked 1:17:15 and won at the Asian Championships in Nomi in March where the next four – all Japanese – eased under 1:18:00.

It was therefore a little surprising none of his compatriots could go with him in Doha. After all, Eiki Takahashi had won the Japanese 20km title in Kobe in February for a fifth time in a row, and in 1:18:00. Koki Ikeda was a single step behind in a race where the first six all went 1:19:00 or better.

In that Kobe race, 80 home-grown race walkers dipped under 1:37:00. The Japanese also did it in Europe.

This will be the nation to beat at the 2020 Olympic Games in Tokyo.

However, Vasiliy Mizinov may have something to say about that. The 21-year-old neutral athlete displayed maturity beyond his years to charge through in Alytus and Doha at a frightening pace over the last two kilometres to take silver medals, as well as fifth for 1:18:41 in La Coruna.

He went one better in exactly the same style to win gold at the European U23 Championships in July from Turkey’s Salih Korkmaz by three seconds. Great Britain’s Callum Wilkinson was third.

Brazil’s Caio Bonfim will look back on the year with a degree of satisfaction. Technically, his 2019 started with a 3:55:24 50km win last December in Adelaide, a fourth in Rio Maior in April, and a sharp third in the Taicang leg in May where Wang Kaihua triumphed in 1:19:48.

Spain’s 20km race walker of the year was undoubtedly Diego Garcia, despite a calamitous walk at the World Championships. Before that lowly 35th, the man from Madrid piled up challenge points in Rio Maior where he was second in 1:21:26 behind 2017 world champion Eider Arevalo.

He was second again in Lázaro Cárdenas behind Karlstrom, third in Alytus behind the Swede and Mizinov, and then recorded a PB, 1:18:58, in La Coruna for a final third place in the challenge standings behind Karlstrom and Yamanishi.

The race walking performance of the year didn’t win a major medal – but it did shatter the world record.

Liu Hong became the first woman to break the four-hour barrier when she recorded 3:59:15 at the Chinese Race Walk Grand Prix in Huangshan on 9 March.

As a result, Liu became only the second race walker in history, man or woman, to simultaneously hold both 50km and 20km world marks as did Yohann Diniz for a single week in 2015.

The 31-year-old Chinese was merely warming up for a 20km world title in September, but her debut at 50km in only her third race since returning from a two-year maternity break suggests Liu is the one to beat if and when she eventually moves up permanently.

In the same race, unknown Li Maocuo dipped under the previous record for 4:03:51 to improve her previous best by more than 11 minutes set in 2018.

The record Liu surpassed was compatriot’s Liang Rui, set in 2018 at the World Race Walking Team Championships. But the latter was more than compensated in Doha at the World Championships where she won the battle of attrition in the stifling heat to take gold from teammate Li Maocuo.

There were four out on their own from 15km, and the slog had become a procession by 30km. The bronze deservedly went to Italy’s Eleonora Giorgi, who walked a solo 4:04:50 for gold at May’s European Race Walking Cup, and topped the world rankings for the year.

That win broke the European record previously held by Ines Henriques, and who finished third in Alytus behind Spain’s Júlia Takacs. However, the inaugural world 50km champion became one of six who succumbed to the conditions in Doha, even if Henriques finished second in the rankings.

The Japanese ‘survived’ – his word – the race in Doha at the World Athletics Championships to lift a first major title, more than four years after setting the current world mark at 20km.

The 31-year-old had been in the doldrums since that stupendous 1:16:36 in Nomi in March 2015. Later in 2015 he dropped out halfway through the 20km at the World Championships, suffering from a hip problem. It took the best part of three years to recover, and what made a huge difference to his rebirth was a single centimetre.

Coaches worked out Suzuki’s 21-centimetre stride was ever so slightly outside his comfort zone, so by reducing it a tiny fraction it enabled him to walk more comfortably.

He also read writing on the wall as early as March when he could only manage fourth on the same Nomi course at 20km where he previously plundered. His 1:17:47 in the Asian Championships was classy by any standards, but a new generation of Japanese have elevated the event to a different level. Moving up to the longer distance was the logical 20-centimetre step.

Even though the World Championship was in the dead of night and as cool as it got, Suzuki and the rest prepared with an array of cooling headgear, neck cloths, and anything else to reduce the strain along the stretch of road known as the Corniche. In fact, Suzuki picked up a custom-made pair of goody bags every other 2km, which he draped around his neck before helping himself.

He led from early on, and kept going for the slowest winning time in the 43-year history of the event starting with Malmo in 1976.

“I don’t feel like (I won the title). I was just desperate to finish,” Suzuki said. “The relief of just being able to reach the goal is the best. The last 16km was a battle against anxiety.”

Anxiety doesn’t appear to have affected João Vieira. If there is an advert for biding one’s time – it’s the 43-year-old Portuguese. Admittedly, he had won silver and bronze at previous European Championships at 20km, but in 2019 he was third to Yohann Diniz at the European Race Walking Cup in May at the longer race, and went one better in Doha to finish behind Suzuki.

Vieira patiently clicked off five-minute kilometres until the last 3km when he made up more than a minute to pass tiring Chinese Niu Wenbin, who in turn was passed by fast-finishing Canadian Evan Dunfee. A mere three seconds separated second from third.

But there was little solace for the world-record holder. Diniz had convinced himself that Qatar was not for him long before he stepped off the plane. The 2017 French world champion was off the pace long before he dropped out at 20km. The man who breezed the European Race Walking Cup in another eye catching 3:37:43 just four months earlier reckoned: “I came here, and I don’t really know why. My head was not there, I started to suffocate quickly.”

Honourable mentions this year go to the evergreen Jesus Garcia, world champion as far back as 1993, who finished eighth in Doha three weeks shy of his 50th birthday. It’s doubtful anyone will replicate the Spaniard’s 13 appearances in the championships thus far, although Vieira might fancy his chances.

Ireland’s Brendan Boyce was sixth in Doha and fifth in Alytus at the European Race Walking Cup where he notched a personal best of 3:48:13.

Earlier in the year, Mexican Isaac Palma won the Pan American 50km Race Walking Cup in 3:49:39, and Dzmitry Dziubin from Belarus bravely stuck at it to lift silver behind Diniz in Alytus.