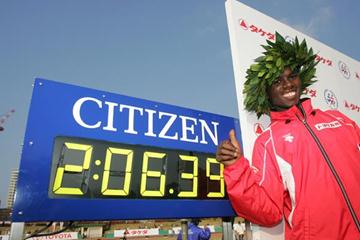 2:06:39 debut victory for Wanjiru in Fukuoka

Samuel Wanjiru, the World Half Marathon record holder, won the 61st Fukuoka Marathon with a course record time of 2:06:39, thus fulfilling both of his goals – winning his debut over the distance and setting a course record.

Deriba Merga of Ethiopia, who was the only runner to stay with Wanjiru past the 40th kilometre, finished second in 2:06:50, also under the previous course record of 2:06:51 set by Atsushi Fujita in 2000. It was a huge personal best for Deriba which knocked more than six-and-a-half minutes from his previous best, set in Paris earlier this year.

In the race for the Japanese Olympic team spot, Atsushi Sato, national Half Marathon record holder, came away victorious. He was third in 2:07:13, a huge personal best (previously 2:08:36).  Sato was followed by Yukou Matsumiya in fourth with 2:09:40. Shigeru Aburaya finished in his usual spot, fifth (he was fifth in the 2001 and 2003 World Championships as well as 2004 Olympics). His goal of making the second consecutive Olympic team was shattered.

How the race unfolded:

The pace makers did very good job of keeping the pace steady at around three minutes for each kilomtre, turning the contest into a typical race of attrition. The first to lose contact with the lead pack were Mark Carroll and Alberto Chaica at about 3Km.  The lead pack of 23 runners at 5Km was reduced to 22 runners by 10Km, 20 runners by 15Km and 15 runners by 20Km.

After passing the half way point in 1:03:30, in one of the most surprising turn of the event, Takaoka, Japan’s national 3000m, 10,000m and Marathon record holder, started to fall behind the leaders. The pace began to increase and by 25Km, only 10 runners - Fabiano Joseph and Isaac Macharia (both pace setters), Atsushi Fujita, Merga, Sato, Aburaya, Daniel Yego, Wanjiru, Yukou Matsumiya and Kensuke Takahashi – remained in contention.

At around 27.5Km, Yego and Matsumiya lost contact with the leaders, while Fujita, Aburaya and Takahashi were left behind some three kilometres later. Both rabbits dropped out of the race at 30Km, leaving Wanjiru, Sato and Merga in the lead. Before the race Wanjiru said he was concerned if he could be patient with the slower pace of a Marathon because he is so used to running fast from the gun. “I was quite nervous until 30Km,” he said.

But with 1:30:01 for the 30Km split, Wanjiru had cleared the first hurdle of his debut Marathon. With Wanjiru and Sato taking turn in the front, kilometre 30 to 31 was covered in 2:58, followed by 3:01, 2:57 and 2:58 splits for the next three. Then Wanjiru increased the pace after 34Km making Sato the next victim. The 35th kilometre was covered in 2:52, leaving Merga, who was fourth at the World Road Running Championships in October, as the only runner able to keep up with the Wanjiru’s pace.

By 35Km, Sato was seven seconds behind the leaders and Wanjiru started to throw in some surges. The next four kilometres were run at a quite uneven pace - 2:56, 3:04, 2:57 and 3:11.  At 39Km, Matsumiya passed Aburaya and moved into fourth, thus keeping his hope for the Olympic team spot alive.  Wanjiru and Deriba were still together at 40Km, but then Wanjiru made a strong move around 40.5Km and the race was over.  Wanjiru covered the final 2.195Km in 6:36 and won the race in the course record.

Before the race, Wanjiru revealed his plan of running 2:06 in Fukuoka and then run 2:05 in a spring Marathon, perhaps London. He thinks that is what it will take to make the Olympic Marathon team for Kenya. With the first part of his goal fulfilled, his second Marathon, which may be harder than the debut, will be awaited with much anticipation.

Unless something dramatic happens in Tokyo and/or the Lake Biwa Marathon next year, Sato is likely to be selected for the team. After the race he said, “Although I could not win the race, I was able to race against Wanjiru and recorded a personal best in the low 2:07s, so it was a good race for me. I had so much trouble since 2004, I was almost ready to give up (the Marathon), but with the help of my coach (Yasushi Sakaguchi), I was able to make it to the top.”  As the situation stands now, Sakaguchi could have two of his runners on the Olympic Marathon team. Another of his protégées, Tsuyoshi Ogata, who finished fifth at the World Championships in Osaka, also has good chance to make the Olympic team.

Ken Nakamura assisted by Akihiro Onishi for the IAAF