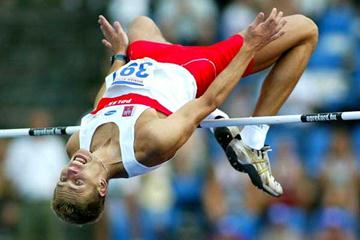 The 4th European Under23 Championships (17-20 July) closed on Sunday, as the record barrage continued from yesterday. Today’s count was also nine, including two records in the women’s 100 metres Hurdles.

The day’s shock treatment came in the men’s High Jump.  Already the winner at 2.29, Poland’s Aleksander Waleriañczyk asked for a U23 Championships record 2.34 and cleared it easily on his first attempt. The Krakow native, a surprise victor in the Polish championships two weeks ago, then requested a world-leading 2.36, on which a successful second jump moved him to the top of the world list.

As former Olympic medallist Artur Partyka looked on, Waleriañczyk’s bid to break the former’s Polish record of 2.39 was very close on one attempt, but it still awaits a later assault by the 20-year-old.

“I still need to lose some more weight,” said the 1.96m-tall Waleriañczyk, adding that his sudden surge from 2.27 to 2.36 this season was due to a steady weight-reduction program after last season.  “If I can lose two more kilograms, I’ll be where I want to be.”

His mentor Partyka seems even more enthusiastic than Waleriñczyk himself, saying “My time is over. Now it’s time for Alexander. I see a great career in front of him. I think he made a big mistake today by not trying 2.40.”

Next up for Waleriañczyk will be the traditional High Jump competition in Eberstadt next weekend. Then comes a pause in preparation for the World Championships.

The top six high jump placers scored personal bests on this sunny day in Zawisza Stadion. Andrey Tereshin of Russia spoiled a possible Polish medal sweep with a 2.27, taking the silver on a countback against Wojciech Borysiewicz, who won the bronze.  Robert Wolski of Poland was fourth in 2.25.

All eyes were on Poland’s Marcin Jedrusiñski as the gun sounded in the men’s 200 metres, and the defending U23 champion came out of the curve in his lane-three position surprisingly in the lead. But in the end, it was the finishing strength of Britain’s Chris Lambert which won the gold in a U23 Championships record 20.34.

Jedrusiñski appeared to stagger just before the finish, but he held on for the silver with a season-best 20.39, ahead of the PB 20.43 from bronze medallist Johan Wissman of Sweden.

Sweden’s Susanna Kallur probably wasn’t expecting to have such a close race in the women’s 100 metres Hurdles. Saddled with the slowest start in the field, the defending U23 champion had to slowly scratch her way to the front, which she accomplished only on the final hurdle to win in an U23 Championships record 12.88.

The leader for most of the race, Germany’s Nadine Hentsche, who herself had hurdled to an U23 Championships record 12.96 in the semifinals earlier in the afternoon, was just nipped at the finish line by Kallur and took the silver in a PB 12.89. Mariya Koroteyeva of Russia (12.95) took the bronze in a tight battle with Dervla O’Rourke of Ireland (12.96).

Responding to the chant of “Ladji, Ladji, Ladji” from the French team, Ladji Doucouré easily won the men’s 110m Hurdles in 13.25. It was just outside the U23 Championships record 13.23 he had achieved an hour earlier in the semifinals.

Sweden’s Philip Nossmy lowered his PB to 13.50 in gaining the silver medal, ahead of Dutch hurdler Gregory Sedoc, who took the bronze with 13.55.

In a men’s Long Jump, the current European junior champion, Loúis Tsátoumas of Greece, leaped 8.24 late in the competition to win gold over Volodymyr Zyuskov’s  PB 8.22. The Ukrainian, who also won the U23 silver two years ago, had held the lead since the opening round but was not able to respond after the Greek’s big jump in the fifth round.

A personal-best 8.09 brought the bronze medal to Romania’s Danut Simion.

Kamila Skolimowska of Poland, the reigning Olympic champion in the women’s Hammer, took the lead on her opening throw and never relinquished it, peaking with 71.38 for a new U23 Championships record, almost four metres ahead of the rest of the field.

Oksana Menkova of Belarus was the best of the rest and took silver with 67.58, while Russia’s Gulya Khanafeyeva was the bronze medallist at 66.98. The U23 year leader until today, Betty Heidler of Germany, finished without an award, in fourth with 66.49.

With a lead-off PB of 82.54, Polish javelinist Igor Janik had ideas of an upset as favourite Aleksandr Ivanov took several rounds to get started. The Russian managed 82.59 in the third round, which survived for a narrow win, as Janik took the silver. Tero Pitkämäki of Finland was the leader of the remainder of the field, and his PB 78.84 won the bronze.

After working hard to gain the lead in the women’s 200 metres after the curve, Marina Maydanova of Ukraine then had to fight off a late challenge by Slovenia’s Maja Nose at the end of the race to win, 22.82 to 23.09.  Dorota Dydo won the bronze with 23.34.

Ethiopian-born Elvan Abeylegesse of Turkey was without peer in the Women’s 5000 Metres, winning in an U23 Championships record 15:16.79 with a forty-six second margin over the silver medallist, Tatyana Petrova of Russia (16:02.79).  The bronze was claimed by Spain’s Sonia Bejarano (16:17.81).

It was a duel between two British runners in the men’s 5000 metres as Chris Thompson outsprinted Mohammed Farah in the final twenty metres for the gold medal, 13:58.62 to 13:58.88.  Farah had taken a twenty metre lead in the penultimate lap, but Thompson gauged his remaining resources effectively in his comeback win. Robert Connolly of Ireland took the bronze-medal with 14:03.75.

Viktoriya Gurova of Russia won the women’s Triple Jump, taking the lead in the first round and then adding to it for a best of 14.37. Simona La Mantia of Italy challenged Gurova with a PB 14.31 to win the silver, while Latvia’s Ineta Radevica jumped a PB 14.04 to supplement yesterday’s Long Jump bronze with the same Triple Jump award.

The men’s Shot Put competition was sorted out before the midway point as Pavel Lyzhin of Ukraine threw a U23 Championships record 20.43 for the gold medal, ahead of silver medallist Pavel Sofin of Russia (20.33).  Dutch thrower Rutger Smith’s hopes for a double win remained unfulfilled, although his 20.18 did take the bronze medal.

Although starting slowly, Ukraine’s Natalya Fokina  expectedly dominated the women’s Discus with her 59.30 performance, an U23 Championships record. Early leader Jana Tucholke of Germany, the top qualifier from Friday, took the silver medal with a season-best 58.24, while the bronze was awarded for the second time to Olga Chernogorova of Belarus (56.57).

Britain’s Rebecca Lyne turned up the pace with 200 metres remaining in an otherwise pedestrian women’s 800 metres and then held off several late challenges to win in 2:04.66.  Lucia Klocová of Slovakia (2:05.02) and Spain’s Esther Desviat (2:05.38) took the other two medals.

The final medal count found Russia at the top with 20 (7-7-6), ahead of Poland’s 16 (5-5-6) and the 12 of Great Britain (5-3-2). The final session fittingly closed with a mass singing of “Mazurek Dabrowskiego”, the Polish national anthem, as the Men’s 4x400 Relay medals were awarded. It served as a reminder that the city of Bydgoszcz will likely again be a focal point of European athletics next year as the host of the Super League European Cup.